While it can be a marvelously tender and juicy cut of meat, cooking chicken breast perfectly consistently can be challenging for even the most experienced chefs. The difference between a worryingly pink breast and and a dry clump of protein with a texture like damp cardboard is only a matter of seconds.

Since most conventional ovens don’t go below 175 degrees F, we usually cook chicken by blasting it with heat in the hopes that we can stop the cooking just as the inside reaches 165 degrees F. The problem with this approach is that by the time the center of the meat hits a temperature of 165 F, the rest of the meat has blown past that number, resulting in the core temperature rising further due to the residual heat. That’s why most recipes will have you pull the chicken out of the oven after it reaches 160 degrees F, which factors in about 5 degrees of additional cooking from the carry over cooking.

Well, let’s first take a look at the reasons behind the recommended internal temperature of 165 F for chicken. According to the USDA, salmonella is killed almost instantly in chicken at temperatures above 162 F. By setting the guideline at 165 F, they’re giving a conservative number that’s easy to remember and accounts for variables such as the fat content of the meat and inaccuracies of thermometers. Like most things in nature though, killing pathogens isn’t so black and white.

Killing pathogens isn’t just about temperature, it’s also a function of time. For instance at temperatures above 162 degrees F, Salmonella is destroyed in under 10 seconds, at 150 degrees F it takes 2.7 minutes and at 136 degrees F it tastes 63.3 minutes. So in theory you could cook chicken to 136 degrees (which is the equivalent to a medium rare steak) and provided you held it there for long enough, it would be just as safe to eat as an overcooked piece of chicken registering 180 degrees F.

But with traditional cooking methods, holding chicken at a low temperature for such a long time would have been next to impossible, and certainly out of the reach of most home cooks. This is where cooking sous vide really shines. It’s a technique that allows you to cook food in a waterbath that’s held at a constant temperature. This allows you to cook difficult foods such as chicken breast safely and predictably, which is why the technique has become so popular in restaurants kitchens.

Critics say that sous vide takes the skill out of cooking and that it makes proteins boring because they end up too tender, but I couldn’t disagree more. Like any technique or tool in a chef’s arsenal, the skill is in knowing when and how to use it.

The thing that’s kept it out of most homes has been the high price of the equipment. But over the past couple of years, new home sous vide devices such as the Anova immersion circulator, which goes for less than $200 has made the technique far more accessible than it ever has been.

Because meats cooked sous vide never see the temperatures required to elicit the Maillard reaction, in most cases it’s important to finish the chicken off by browning it. With chicken breasts, you really want to avoid overcooking it, which is why I stay away from ovens and frying pans and opt a torch to finish it off.

For this chicken teriyaki, I glaze the chicken with a mixture of sugar soy sauce and sake before torching it, which preserves the moist tenderness on the interior while giving you a marvelously caramelized exterior. 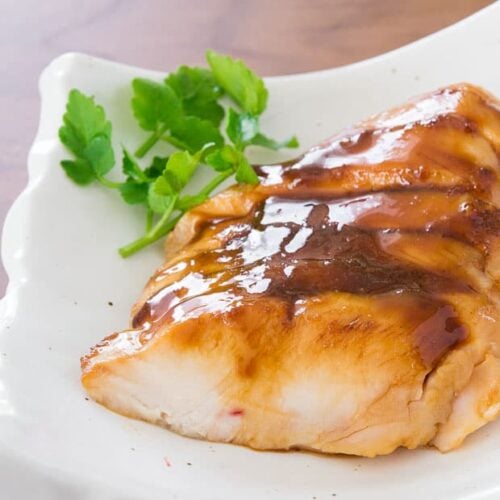