With all the beer cooler sous vide recipes floating about the interwebs I’ve been itching to try it out. Last week after a Fresh Direct event, I was given what was perhaps the best goodie bag I’ve ever received at any press event. It was overflowing with ramps, an awesome banana bread, freshly ground peanut butter, and most importantly, there was a 1.5″ thick porterhouse steak in a vacum sealed bag.

It sat in the fridge for a few days, and when I finally had a chance to make it, I surveyed my closet containing the beer cooler and decided it wasn’t worth getting buried under a avalanche of shoe boxes to have my steak sous vide. Disappointed, I headed back to the kitchen, eyeing the cast iron pan for a minute before refocusing my gaze on my blue enameled dutch oven.

I could feel the excitement surge up from the bottom of my stomach and through my brain to a little lightbulb floating whimsically above my head. I use the dutch oven all the time to do slow cooked eggs at a controlled temperature, so why not use it on the steak as well.

I quickly prepared a 131 degree water bath, dropped the Cryovac sealed steak into the water and put the whole assembly in a 170 degree oven. My oven tends to run cool, and by checking the temperature every 30 minutes, I let just enough heat out to keep the water at a steady temp between 128 and 133. After an hour and half I took out the now rather unappetizing looking pink and grey steak, opened up the bag and was greeting by a ridiculously tender piece of meat that was still bleeding.

Some salt and pepper and a quick sear in the cast iron skillet and I had a normal looking steak on the outside that was impossibly tender and perfectly pink all the way through.

Taking some inspiration from my carne asada recipe, I paired this with a salad of tamed onions, cilantro and lime juice. The crisp, sweet and tangy salad was the perfect counterpoint to the rich fatty slab of caramelized meat on the plate.

To get rid of the strong oniony taste and to make the onions extra crisp, I borrowed a Japanese technique often used with cabbage. First you slice the onions super thin (I used a mandoline), then you drop them in an ice water bath for an hour, changing the water once in the middle. This takes most of the edge off the onions, allowing the natural sweetness to shine through. 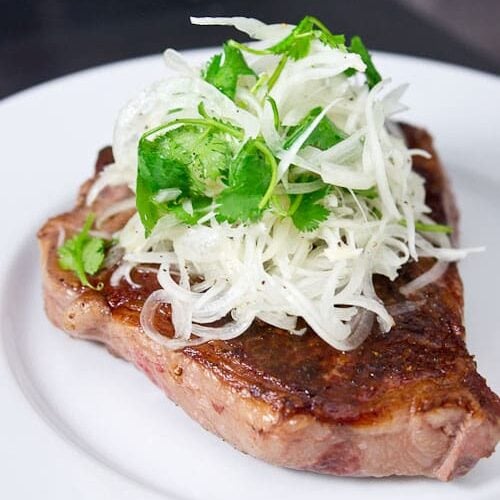