Rich, tangy, and loaded with nutty sesame flavor, this Creamy Sesame Dressing has become a modern classic at Japanese restaurants worldwide. Here in Japan, sesame dressing is known as goma dressing (ごまドレッシング), and you’ll find it on the table at most homes and many casual eateries.

It comes together in minutes and will keep for weeks in the fridge, so I hope you’ll give this easy sesame dressing a try the next time you crave a Japanese salad.

How to Make Sesame Dressing

The first thing you’ll want to do is make some ginger juice by grating some fresh ginger on a rasp or Microplane. Then you can gather up the pulp and squeeze it with your fingers to extract the juice.

Then you just need to add the ginger juice to a bowl along with the sesame paste, mayonnaise, rice vinegar, soy sauce, maple syrup, toasted sesame oil, and salt, and whisk the ingredients together until they form a smooth and creamy dressing. You can also just add all of the ingredients to a bottle with a lid and shake the dressing together.

Stored in the fridge, this sesame salad dressing will last for a few weeks. It’s pretty thick, so I recommend keeping it in a plastic squeeze bottle to make it easy to dispense, but a glass jar will also work.

How to Make a Japanese Salad

There are many different Japanese salads, but the side salads served alongside modern Japanese breakfasts and teishoku lunches tend to have a few things in common.

The lettuce used is usually iceberg lettuce. This is because it tends to have the most crispy texture without the bitter taste of some other lettuce varieties. To get it extra crisp, the lettuce is usually chopped or torn into bite-sized pieces and soaked in cold water. Then it’s drained and dried before being used as the base of the salad.

Another defining trait of Japanese salads is the variety of toppings. It’s not uncommon to top the leafy greens with five or six other vegetables, and the key is to include a variety of textures, tastes, and shapes. This makes it visually appealing while ensuring you’re eating a good variety of nutrients. I’ve used tomato wedges, sliced cucumbers, julienned carrots, broccoli sprouts, and a whole radish for the salad shown in these pictures.

Once your Japanese salad is assembled, you can finish it off with a drizzle of this Creamy Sesame Dressing.

What is Japanese Sesame Dressing?

In Japan, there are several similar sauces made with sesame. The most traditional is a sauce used for boiled vegetables in a dish called Goma-ae made from ground sesame seeds, dashi, soy sauce, and sugar. The sauce used for dipping shabu shabu is called Goma-dare. It’s similar to the sauce for Goma-ae, but it includes sesame paste which makes it more creamy. Finally, Goma Dressing (literally “sesame dressing”) adds mayonnaise and uses vinegar in place of the dashi to make for a thick creamy dressing that’s perfect for Japanese Salads.

How do you pronounce Goma Dressing?

When voiced in  Japanese, Goma Dressing becomes a 7-syllable word and is pronounced as follows (read the italicized parts).

As long as you use plant-based mayonnaise, this sesame dressing recipe is vegan friendly.

How to use Sesame Dressing?

The easiest way to use this Asian Sesame Dressing is to drizzle it on your favorite salad. Japanese salads typically include crisp iceberg lettuce and a rainbow of vegetables, such as shredded carrots, sliced cucumbers, tomatoes, sprouts, corn, etc. The key is to include a wide variety of colors, textures, and shapes. This dressing is also good drizzled on cooked vegetables, poured over soft tofu, or used as a dipping sauce for cold noodles or shabu shabu. 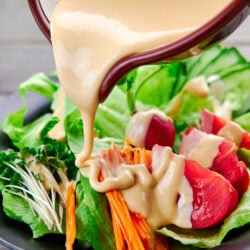