Traditional Japanese meals usually consist of rice and soup, along with a protein, but these are almost always accompanied by a few kobachi (小鉢) or small bowls, which are filled with side dishes. Goma Ae is one of the most common side dishes that can appear on the table for breakfast, lunch, or dinner. The combination of earthy sesame seeds and umami-rich soy sauce can turn almost any vegetable into a mouthwatering side. The veggies bring the vitamins, while the sesame seeds offer loads of protein, fiber, and minerals.

How to Make Goma Ae

Wash the spinach. Spinach is grown in sandy soil, which tends to get trapped where the leaves come together at the roots, so it’s important to wash thoroughly between the leaves. I like to wash it in a large bowl of water because the sand is heavy and will settle to the bottom. This allows you to pull the spinach out of the water without having the sand you just washed out settle on the leaves again.

Boil the spinach in a large pot of water by submerging the stems and roots first and then pressing the leaves in as the stems wilt. This ensures it cooks evenly. When the water comes back to a rolling boil, the spinach should be done. Drain it and chill with cold water. If you’ve left the roots on, you should be able to use them to lift the spinach out of the water, with the leaves all going in the same direction. Squeeze excess water out of the spinach and then cut the spinach into 2-inch lengths. You can discard the roots if you want, but I like using them as a garnish as they have a nice color and tend to be sweet.

To make the sesame dressing, you’ll need to grind the toasted sesame seeds. I usually use a stone mortar and pestle, but a traditional ribbed Japanese one, a clean coffee grinder, food processor, or blender will all work. If you use a machine, be careful not to overdo it, or you’ll end up with tahini. The ground sesame seeds should look like damp sand.

Then you want to mix the ground sesame seeds with the soy sauce and sugar until it forms a crumbly paste.

Now you just need to mix the spinach and sesame sauce to complete your Goma Ae. Once the components are mixed together, I usually like to let it rest for at least fifteen minutes. This gives the flavors a chance to mingle, and the moisture from the spinach hydrates the sesame, giving it a creamy taste.

What is Goma Ae?

Goma Ae (ごま和え or 胡麻和え) literally means “mixed with sesame seeds”. It is part of a class of Japanese side dishes called aemono(和え物) or “mixed thing,” which usually involves two components mixed together. In this case, one component is a sesame sauce, while the other component is typically a vegetable. Spinach (ほうれん草 – hourensou) is the most common vegetable used for making this dish, but it is prepared with other vegetables as well.

Can I make Goma Ae with other vegetables?

Yes, Goma Ae can be made with almost any vegetable. Spinach is the most common, but other vegetables used in Japan include green beans (隠元 – ingen), komatsuna (小松菜), and broccoli (ブロコリ).

What kind of sesame should I use for Goma Ae?

This dish will work with any unhulled toasted sesame seed (white, black, or gold). I don’t recommend using hulled sesame seeds as these only include the seed’s oily endosperm, which lacks the flavor and texture of the whole seed. As for pre-ground sesame, I usually avoid it for the same reasons I don’t buy pre-ground black pepper. The flavors and aromas disappear pretty quickly once ground, so it’s best to grind the sesame seeds yourself as you use them. You can read more about the type of sesame seeds to use in the Ingredients section above.

How do you pronounce Goma Ae?

Goma Ae is for syllables and is pronounced as follows:

This Goma Ae recipe is plant-based, provided you use vegan-friendly sugar. That’s not the case for all versions of this dish, as some include dashi or katsuobushi. 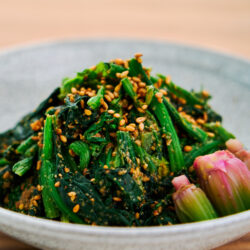