While the word “pudding” tends to refer to a class of egg and starch thickened desserts in the US, in other English speaking regions of the world it can refer to a range of sweet and savory dishes. Sticky Toffee Pudding is one example of the broader definition and is usually made with a date infused cake topped with a rich toffee sauce. While its history only goes back about 40 years, it’s become a modern classic that can be found in restaurants and homes around the UK, Australia and New Zealand.

It’s a supremely comforting dish to eat, but the smell of caramelizing sugar and butter makes it equally comforting to make. I’ve spent this summer travelling around the US, working in kitchens in Colorado and New York. If you follow me on social media you probably know I had a little mishap in Colorado that led to some helicopter rides, a dozen xrays, a CAT scan and a 2 1/2 hour surgery to put the pieces of my right wrist back together. Given the speed at which I was travelling on a 4-wheeler when it rolled, and the fact that I wasn’t wearing a helmet (I know… I’m an idiot), I feel pretty lucky to be alive and relatively unscathed. To make a long story short, I’m finally back home and am definitely in a need of a bit of comfort.

For my first recipe since getting home, I decided to have a little fun and mashup two of my favorite comforting desserts and came up with this sticky toffee bread pudding. By replacing the cake batter with vanilla bean custard drenched sandwich bread and covering it in a sticky toffee sauce made from date syrup and butter it strikes an awesome balance between a traditional bread pudding and a sticky toffee pudding.

“Date syrup is a wonderful ingredient to have in your pantry and can be found in any Middle Eastern grocery store. It’s made by reducing date juice into a thick molasses-like syrup which tastes milder than molasses but has a robust caramel flavor with just a hint of tartness. Aside from using it in this recipe it makes for a flavorful sweetener for sauces and stews and works equally well as a topping on yogurt, pancakes and ice cream.”

To keep the pudding moist on the inside while getting a marvelously crisp topping, I kept it covered with foil through most of its time in the oven. Then, by removing the foil and turning up the heat at the end, you get a rich decadent steamed pudding on the inside with luscious sticky toffee sauce on the bottom and a crisp caramelized top that provides a nice contrast to the dense interior. 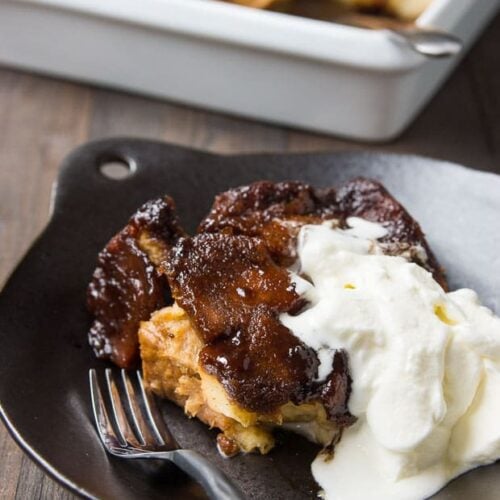