While Sweet and Sour Chicken is best known as a Chinese takeout favorite, there are variations of the classic in other Asian countries, and today I want to show you how to make a Japanese version of this dish.

Popularized by a restaurant called Ootoya, this colorful take on sweet and sour is loaded with a rainbow of colorful vegetables and tender, juicy chunks of chicken marinated in soy sauce and ginger. The sweet and sour sauce combines black vinegar, soy sauce, and sugar to create a sweet, sour, savory glaze that looks beautiful and is lip-smackingly delicious.

How to Make Japanese Sweet and Sour Chicken

You first want to cut up the chicken into largish bite-sized pieces and marinate them in soy sauce, sake, and ginger. Ideally, you want to marinate it in the fridge for a few hours, but even ten minutes is better than nothing.

For the vegetables, I like to cut the cylindrical vegetables (eggplant, sweet potato, and carrot) into an oblique cut, known as rangiri (乱切り) in Japan. This is done by slicing off bite-sized pieces at a 45° angle and then turning it a quarter turn between each cut. You can watch the video below to see how this is done.

Lotus root oxidizes once cut, so you first want to prepare a bowl of acidified water by squeezing some lemon into the water or adding vinegar. Then you can peel and slice the lotus root into 1/4-inch thick wheels before soaking them in the acidic water.

To prep the peppers, I like to slice into the peppers’ indentations, where the seeds and membranes are. Then you can segment the pepper and easily cut away the white membranes and seeds. Once the peppers are trimmed, cut them into bite-sized squares.

Drain and dry off the lotus root just before you fry them, and then toss the vegetables individually with a small amount of potato starch to give them a very thin coating of starch.

The vegetables each take a different amount of time to cook. Once you have a pot of oil preheated to 340°F (170°C), fry them according to the directions below:

Once each vegetable has cooked through, transfer it to a cooling rack lined with paper towels to drain.

While the vegetables are frying, you can prepare the chicken by dusting each piece with a generous potato starch coating. Try and keep the skin on the outside of the chicken while balling the chicken up using your fingertips. This keeps the chicken pieces roughly the same thickness, so they fry up in about the same amount of time.

Fry the chicken in the oil after the vegetables are done for about four to five minutes, turning them over several times. When the chicken is golden brown and crisp, drain them on the paper towel-lined cooling rack.

To finish the sweet and sour chicken, add the sugar, sake, and soy sauce to a large skillet over medium-high heat and bring the mixture to a rolling boil over high heat. When the sugar has dissolved and the sauce no longer smells like alcohol, pour in the two kinds of vinegar along with the fried chicken and vegetables.

Toss to coat the chicken and veggies with the black vinegar sauce. When it’s thickened into a glaze, the Japanese-style sweet and sour chicken is done.

Because it’s so colorful, it doesn’t really need any garnishes, but you can chop up some green onions and sprinkle them on top, or use some toasted sesame seeds if you like.

What is Japanese Sweet and Sour Chicken?

Sweet and sour chicken is a generic term that encompasses several different dishes inspired by Chinese cuisine in Japan. This recipe is for Niwatori To Yasai No Kurozu An (鶏と野菜の黒酢あん), which literally means, “chicken and vegetables with black vinegar gravy.” The dish was initially popularized by the Japanese chain restaurant Ootoya, where it is sold as both a teishouku (meal set) as well as a bento. The chicken is marinated and coated in starch before being deep-fried, along with an accompanying medley of vegetables such as carrots, onions, and potatoes before they’re glazed in a sweet and sour black vinegar sauce.

What is black vinegar?

Black vinegar is an inky black vinegar originating from the city of Zhenjiang in eastern China. The Chinese version uses wheat, rice bran, and glutinous rice. In the mid-1970s, a Japanese brewery began producing black vinegar locally using 100% brown rice and marketed it as a health tonic to be taken by the spoonful. It’s since become a popular ingredient; however, it tends to be milder in flavor than Chinese black vinegar.

How do I make vegan sweet and sour chicken?

Everything except the chicken in this sweet and sour recipe is plant-based, so you can easily make this vegetarian and vegan friendly by replacing the fried chicken with my tofu karaage. The vegetables and black vinegar sweet and sour sauce can be prepared without modifications. 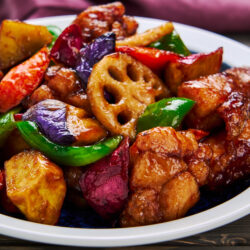