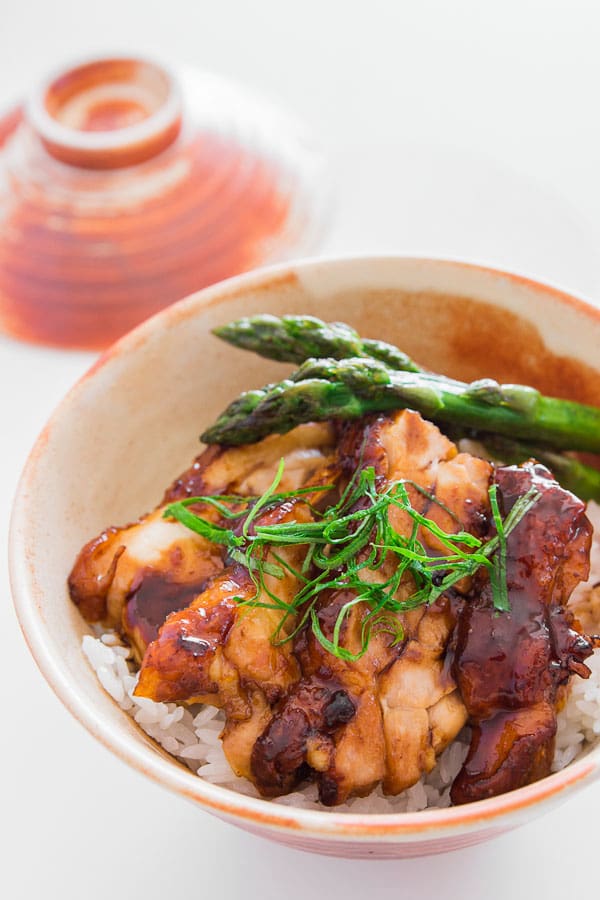 If you’ve been following this blog for long, you probably remember that I’ve posted about chicken teriyaki before. It was a grilled preparation that involved brining, grilling and basting the chicken, and while delicious, it’s a fair amount of work.

While teriyaki may have originally been a grilled dish, these days in Japan, the chicken is pan-fried more often than not due to busy schedules and a lack of charcoal grills. It doesn’t have the smoky flavor that grilled chicken teriyaki has, but pan frying produces chicken that’s more moist and tender. The best part is that the chicken and sauce can be made in the same pan, which not only makes it fast and easy, it means there’s one less pot to wash.

Since discovering this method for easy chicken teriyaki, I’ve honestly been using it more than the grilled method because it produces great results with much less effort, and so I wanted to share it with all of you.

In case you’re wondering why there’s no cornstarch in the sauce, it’s because the soy sauce and sugar caramelize during cooking, naturally thickening the sauce. If you add cornstarch it not only clouds the sauce, your teriyaki sauce will taste flat in comparison because it hasn’t had a chance to caramelize.

This can be made with any cut of chicken, but in Japan the thigh meat is preferred because it has more flavor. In Japan, “chicken thighs” include both the meat from the drumstick and thigh, so one “thigh” ends up making for a large steak-sized fillet of chicken. In the US, you can either buy whole legs and fillet them yourself, or you can just use more of the smaller chicken thighs. Either way, make sure the fillet is as even in thickness as possible otherwise you’ll end up with parts that are undercooked and other parts that are overcooked.

How to Cook Japanese Short-Grain Rice

What do you think?208 Cancel reply