Uni Pasta (ウニパスタ) is a Japanese-style pasta made with spaghetti enrobed in a creamy sea urchin sauce. In Japan, it’s one of those fancy dishes you expect to find on the menu at expensive restaurants, but it’s actually not that difficult to prepare.

In this Uni Pasta recipe, I’m going to show you the fundamental techniques you need to know to prepare this, and these methods can be adapted to make other similar pasta dishes.

Uni (うに, ウニ, or 海胆) is the Japanese word for sea urchin. It’s also the name of the edible orange or yellow roe or “coral” inside of the sea urchin’s shell. Although it’s traditionally been eaten by cultures worldwide, Japan is by far the largest consumer of uni.

Climate change has contributed to a boom in sea urchin populations around the world, and they’ve decimated kelp forests in those areas. Since marine forests can sequester up to 20 times the amount of carbon per acre than their land-based equivalent, this is bad. That’s why this is one delicacy from the sea you don’t have to feel too guilty about eating.

How to Make Uni Pasta

To make the uni cream, mash 3/4 of the uni with a fork or a whisk, and then stir in the cream. You can also do this by pulsing an immersion blender or food processor.

Bring a pot of well-salted water to a boil (1 teaspoon of salt per 10 US cups of water). Boil your pasta for two minutes less than the package directions (we finish cooking the pasta in the sauce). For the spaghetti I used, the boiling time was eleven minutes, so I set the timer for nine minutes.

When the timer is down to three minutes, add the olive oil, garlic, and anchovies to a frying pan over medium-high heat. Sautee the mixture until the garlic is fragrant and cooked through, but don’t let it brown.

Turn down the heat and carefully add the soy sauce. When the soy sauce has mostly evaporated, add the sake. There are two reasons for turning down the heat. The first is that adding a liquid to hot oil will spatter; the second is that the sudden release of alcohol vapors can cause it to ignite.

Turn the heat up to bring the mixture to a boil and cook it until it no longer smells like alcohol.

When the timer goes off, transfer the spaghetti directly to the frying pan with tongs. You also want to get a ladle of the boiling liquid into the pan. Continue cooking the pasta with the garlic and oil, stirring constantly.

Once there is very little liquid left, add another ladleful of boiling liquid to the pan and repeat until the pasta is cooked to your liking. This should take another 2-3 minutes.

To finish the pasta, add the uni cream and toss until the pasta is evenly coated, and the sauce has warmed up.

If the pasta starts to stick together or the sauce seems too thick, just add more boiling liquid to thin it out. Keep in mind that the spaghetti will continue to absorb the sauce as you plate it, so you want it to be fairly juicy.

Twirl the noodles in a bowl with tongs to plate it and garnish the uni pasta with the reserved fresh sea urchin and green shiso.

What is Uni Pasta?

How do you pronounce Uni Pasta?

Uni Pasta is a 5-syllable name pronounced as follows (read the italicized parts).


Like most foods, the taste of uni varies depending on where its from and how it was raised. Generally speaking, uni is creamy, sweet, and briny with a good dose of umami. It should smell like a clean ocean breeze, but it should not smell fishy. Uni that’s been processed with alum can taste bitter, so I recommend looking for one that is untreated.

Is there Uni Pasta in Italy?

Japanese uni pasta was likely inspired by the Italian dish spaghetti ai ricci di mare; it’s a popular summertime dish in the coastal regions of Puglia, Sardinia, and Sicily. Unlike the Japanese version, it’s made without cream, which makes it lighter. 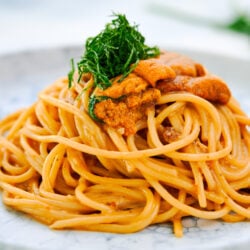