If you’re Italian, you may want to look the other way because you might find this recipe offensive. That being said, Spaghetti Napolitan isn’t an Italian dish as the name would imply, but rather a Japanese creation from a bygone era. In the same way that California rolls and Caterpillar Rolls were created in the West to adapt sushi to Western palates, Spaghetti Napolitan was created in Japan to suit the Japanese palate during a time when Western food first started to appear. It may not be authentically Italian, but it’s been an authentic part of Japanese yōshoku for the past 90 years.

In fact, it’s become such a part of Japanese food lore, Spaghetti Napolitan has been featured in episodes of Midnight Diner and Food Wars. That’s probably why I’ve gotten so many requests for my Napolitan recipe.

Every version of this dish I’ve had before has had too much sugar added, making them too sweet for my tastes. I’ve eliminated the added sugar for my version, as the ketchup has plenty of sweetness on its own. What you get is a tasty agrodolce sauce that’s a perfect counterbalance for the salty cured meat.

To be honest, I’d still prefer a proper Bolognese(takes 3 hours), or even my quick spaghetti (takes 30 minutes), but the appeal for kids —and the nostalgic appeal for grownups— is understandable. As a ridiculously quick fix that can be thrown together when your fridge is almost empty, in about the time it takes to boil a pot of pasta, this Japanese Spaghetti is pretty hard to beat.

How to Make Spaghetti Napolitan

Bring a pot of water to a boil and add a tablespoon of salt for every 5 cups of water. You want to boil the spaghetti for 1-2 minutes less than what the package directions say so we can finish it off in the sauce.

Preheat a frying pan over medium heat, and when the pasta has about 6 minutes remaining, add the olive oil, onions, and mushrooms. Saute these until they are just starting to brown around the edges.

Add the bacon (or whatever cured meat you chose) to the pan and saute the mixture until it’s mostly cooked through. We’re still going to cook this together with the sauce, so you don’t want to overcook it at this point, which can make it tough.

Add the green peppers and give it a few tosses to integrate it. I like my peppers to still be a little crisp and vibrant green, so I don’t cook them for very long, but if you prefer them to be tender, you can add these in with the onions and mushrooms at the beginning.

When the pasta has about a minute left to go, add the ketchup, along with a ladleful of pasta water, and season this with the soy sauce, butter, and black pepper. Give this a vigorous stir to ensure the butter emulsifies with the sauce.

When the timer for the pasta goes off, add it straight into the pan with the sauce. It’s okay if some more pasta liquid goes into the sauce as you want to finish cooking the spaghetti in the sauce.

Serve your Spaghetti Napolitan with a side of parmesan cheese.

What is Spaghetti Napolitan?

Though the name may imply its from Naples, Spaghetti Napolitan was a dish created in Japan and is most commonly attributed to chef Shigetada Irie of the Hotel New Grand in Yokohama who is said to have been inspired by watching American troops mix ketchup into their spaghetti after the second World War.

How do you pronounce Spaghetti Napolitan?

There’s a bit of confusion on the pronunciation of Napolitan because the name is sometimes transliterated back to the Roman alphabet as “Naporitan.” The issue is that the Japanese language does not have distinct “l” and “r” sounds. Instead, the closest equivalent is somewhere in between the two. This is why the Japanese have trouble differentiating “grass” and “glass,” while English speakers have trouble pronouncing “ramen.”

na like knob
po like pole
ri the “ri” sound does not exist in the English language and is like if you tried to pronounce “ream” with the tip of your tongue at the front of your mouth.
tan like tarp plus on

Can I use a different pasta for Napolitan?

Yes. You’d need to change the name, but this method works with any style of pasta. 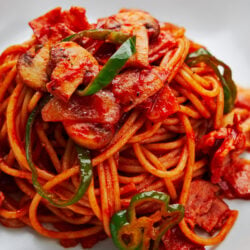