I’ve been seeing a lot of “easy caramel sauces” around the web lately that involve melting brown sugar in cream and reducing it. While they may have the color of caramel, they’re a bit like a cheap iPhone knockoff… a poor imitation of the real thing. That’s because the sugar in these recipes isn’t actually caramelized. Instead, you’re getting a cream based brown sugar syrup which lacks the nuanced flavor and hint of bitterness that makes a real caramel sauce so good. Unlike a dirt cheap iPhone clone though, a fake caramel sauce takes just as much time to make, which leaves me to wonder, “what’s the point?”

Here’s my technique for making an easy vanilla caramel sauce. For your pittance of effort, you’ll be rewarded with about a cup of insanely flavorful vanilla caramel. In my case I had about a cup in the pan, but by the time I transferred it to a jar about a quarter of it had not-so-mysteriously disappeared into my mouth:-)

The addition of a whole vanilla bean really takes this sauce to the next level with a heavenly aroma and little black vanilla seeds that add some visual appeal to the rich brown caramel. Flavorwise, you still get the smoky sweet caramel notes as the silky smooth sauce dissolves on your tongue, followed by the rich cream and butter, but the real treat comes at the end with the long, lingering flavor of vanilla.

I prefer using evaporated cane juice (a.k.a. raw sugar) for the caramel because it has more flavor than the white stuff. Since unprocessed sugar will burn if you take it to the standard 350 degrees F for making caramel, be sure to stop it at 330 degrees F. If you are using regular granulated sugar to make this, be sure to take it all the way up to 350 for the most flavor.

This caramel sauce is delicious on apple pie, ice cream, or pancakes, and makes an incredible dipping sauce for apples and bananas. Store it in the fridge and reheat for a few seconds in the microwave to make it pourable again. 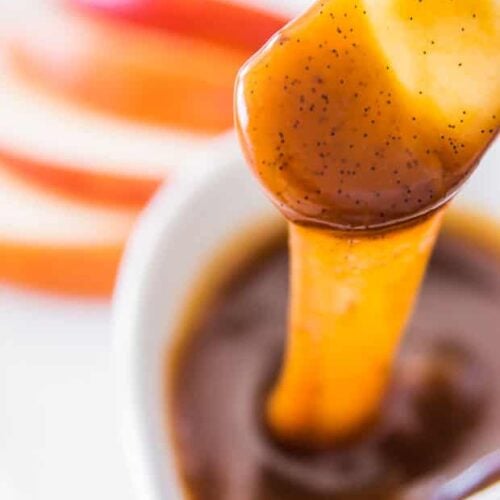