Okonomiyaki (お好み焼き) is a savory Japanese pancake that’s typically made with cabbage, meat or seafood and held together with an egg-based batter. With a few substitutions, it’s easy to make Okonomiyaki plant-based, and I actually prefer the texture of eggless Okonomiyaki.

What does Okonomiyaki mean?

Okonomi (お好み) means “preference” or “personal taste” while yaki (焼き) can mean grilled, griddled, or fried, so Okonomiyaki basically means “cooked as you like it.” 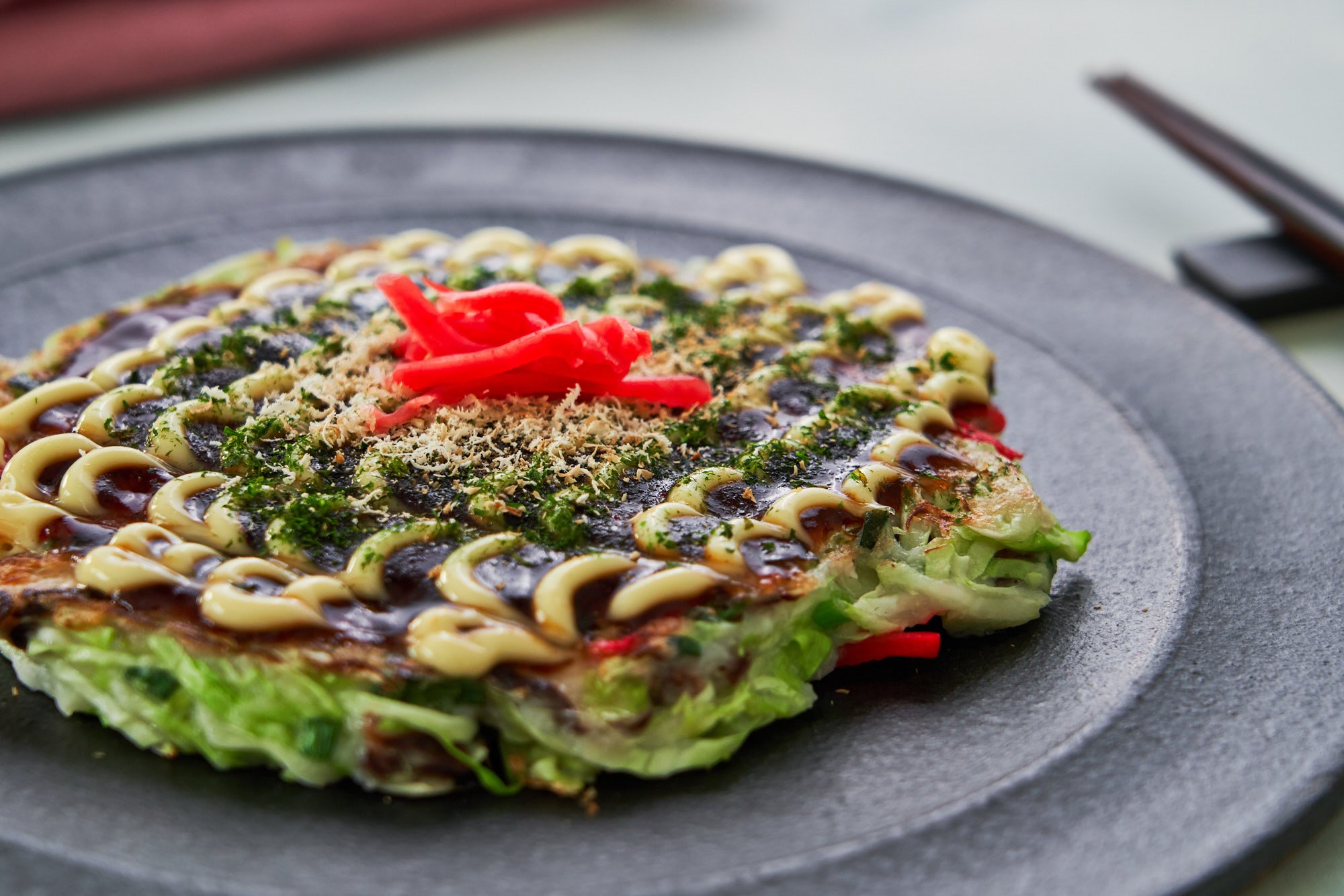 How can I make Okonomiyaki Vegan?

There are three non-vegan components of typical Okonomiyaki. The first is the egg in the batter. The egg is primarily used to bind the ingredients together along with the flour. The second ingredient is the pork belly, which is laid on top of the pancake before flipping it over. The meat serves to add flavor and as well as fat, which helps the Okonomiyaki to brown. The third ingredient is katsuobushi, which is dried, smoked and fermented skip-jack tuna, which is shaved into thin flakes and used as a topping to boost the umami taste of the pancake.

The easiest to replace is the pork, which can be substituted with any plant-based product that is capable of adding flavor to your Okonomiyaki. I’ve used shiitake mushrooms, which not only pack a flavor punch, they also have a nice meaty texture. Other mushrooms or plant-based ham or sausage will work as well.

The katsuobushi can be replaced with any powder that’s packed with umami. I like to shave dried shiitake mushrooms on top with a microplane. This produces little flakes that not only look like katsuobushi, but they’re also packed with naturally occurring glutamates and guanylates which stimulate the umami taste receptors in your mouth.

Finally, the egg substitute is where it gets a little complicated. Eggs not only act as a source of liquid for binding the ingredients together in conjunction with the flour; they also have a viscous consistency that is very good at trapping air bubbles. When the mixture is heated, these air bubbles expand, and when the mixture reaches a specific temperature, the eggs gel, trapping the bubbles permanently. Which creates a fluffy texture.

Typical plant-based solutions like flax meal or chia meal replicate the gooey texture of eggs, but they don’t gel when heated. This is where yamaimo comes in to save the day. 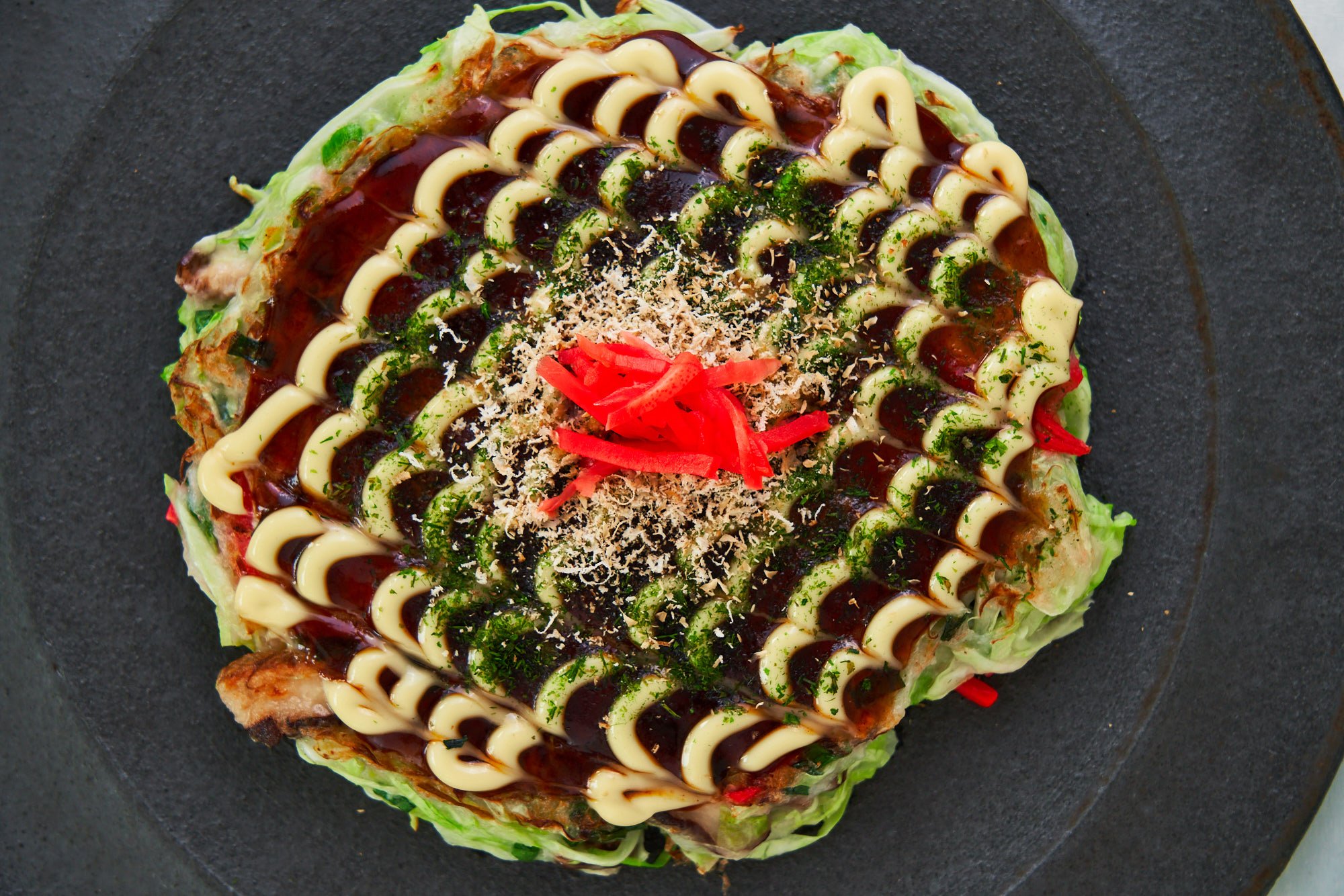 Yamaimo (ヤマノイモ) literally means “mountain potato,” and it’s a member of the yam family which grows a long tuber with whiskers that has tan skin and white flesh. The unique thing about yamaimo is that it has a thick mucilaginous texture when grated raw, which is very similar to raw egg. When heated, the starch in the yam gels, giving it the ability to trap some air as well. This is what makes it such a good egg substitute.

Traditional okonomiyaki recipes usually call for both yamaimo and egg, but yamaimo is perfectly capable of binding the pancake together without the help of egg. The texture does end up a little more dense and moist, but I actually prefer this as it becomes similar to takoyaki.

How can I make Okonomiyaki gluten-free?

Like any pancake, you don’t want to form a lot of gluten in Okonomiyaki; otherwise, it will become dense and chewy. That’s why almost any gluten-free flour substitute containing a sufficient amount of starch will work. Gluten-free all-purpose flour mixes, rice flour, and chickpea flour will all work. Starches such as potato starch will work as well, though I find the Okonomiyaki tends to end up a bit gummy. I don’t recommend using flours that don’t contain much starch, such as coconut flour, and nut flours.

Hiroshima and Kansai (Osaka) are two regions of Japan that each has a unique style of making Okonomiyaki. In Hiroshima, batter, cabbage, pork, seafood, and yakisoba are stacked on a griddle, which creates layers within the pancake. In Kansai, everything is mixed together before being poured onto the griddle, and the ingredients typically don’t include noodles. This recipe is for a Kansai-style (Osaka-style) Okonomiyaki?

What goes into a traditional Osaka-style Okonomiyaki?

As the name implies, there is a great deal of flexibility in what you can add to Okonomiyaki, but a very basic Kansai-style Okonomiyaki typically includes a batter, cabbage, pork belly, scallions, and benishoga (pickled red ginger). From there, people customize it to suit their own tastes adding everything from other vegetables to seafood, to cheese, to mochi. Some ideas of things I like to add to vegan Okonomiyaki include red cabbage, avocado, maitake mushrooms, shredded carrots, bean sprouts, edamame, and fried tofu. 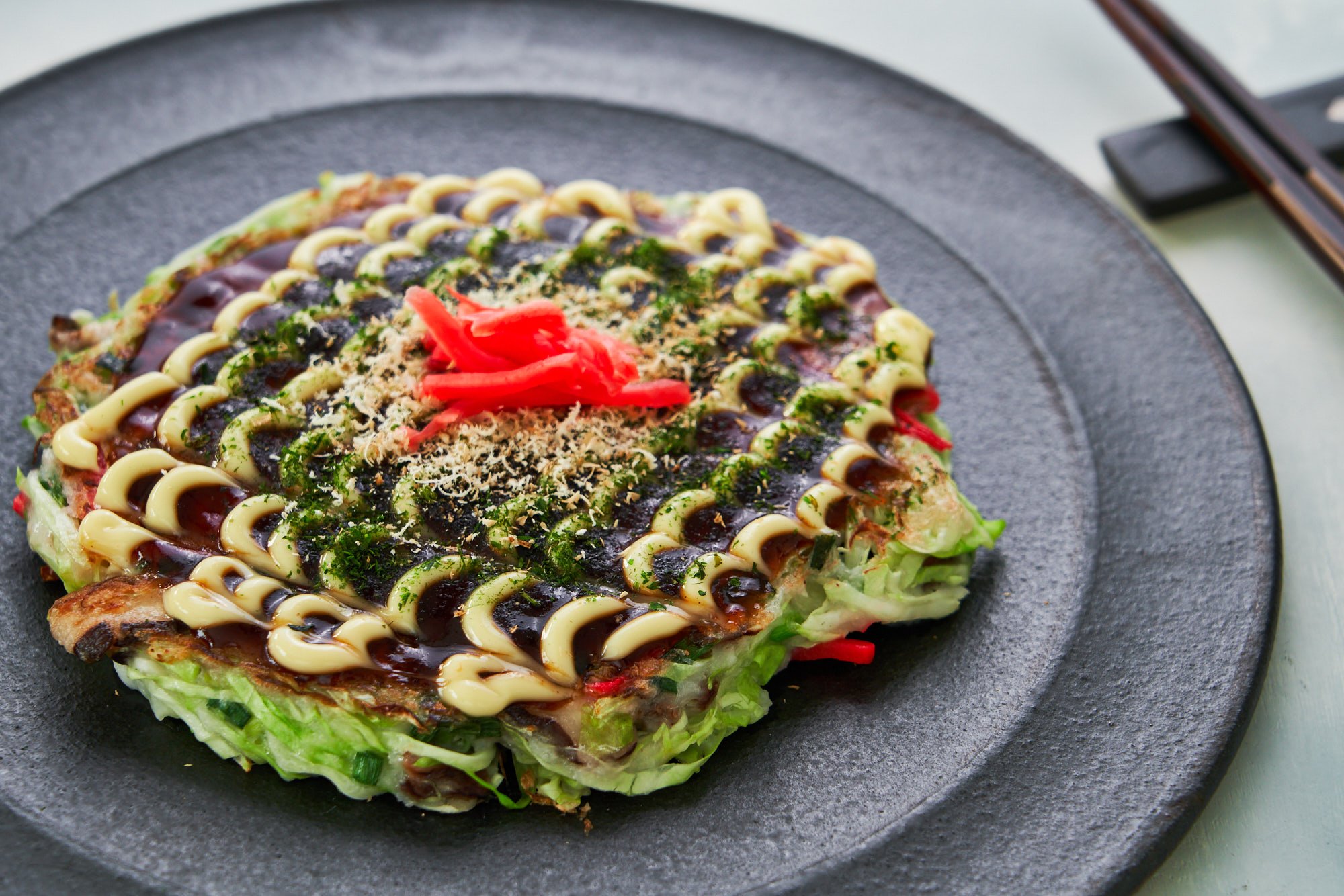 Should the cabbage be shredded or chopped?

How the cabbage is cut is mostly a matter of personal preference. Shredding the cabbage creates long, thin strands that tend to hold the pancake together better while giving it a more crisp texture. Chopping the cabbage makes it fall apart more easily, but the larger pieces of cabbage tend to be more crunchy.

How do I serve Okonomiyaki?

In a restaurant, Okonomiyaki is typically prepared and eaten straight off of a tabletop griddle. Since this isn’t particularly practical at home, I usually cook it on the stove on a griddle and then keep them covered in aluminum foil in the oven to keep them warm.

Topping the Okonomiyaki is another area to exercise your creativity. Traditionally Okonomiyaki is covered in a thick layer of Okonomiyaki sauce before being drizzled with mayonnaise, sprinkled with aonori (green nori flakes), and then topped with katsuobushi. But since this dish is all about customization, I often make the toppings match what I mixed into the Okonomiyaki.

For instance, if I mix in plant-based chorizo, jalapenos, and cilantro into the pancake, I might top it with guacamole and pico de gallo. Okonomiyaki filled with “pulled pork” jackfruit might get topped with barbecue sauce and plant-based mayo (which makes the cabbage inside taste like coleslaw). The sky’s the limit here in terms of creativity, so have fun making your Okonomiyaki! 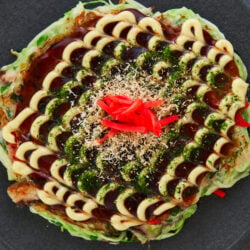