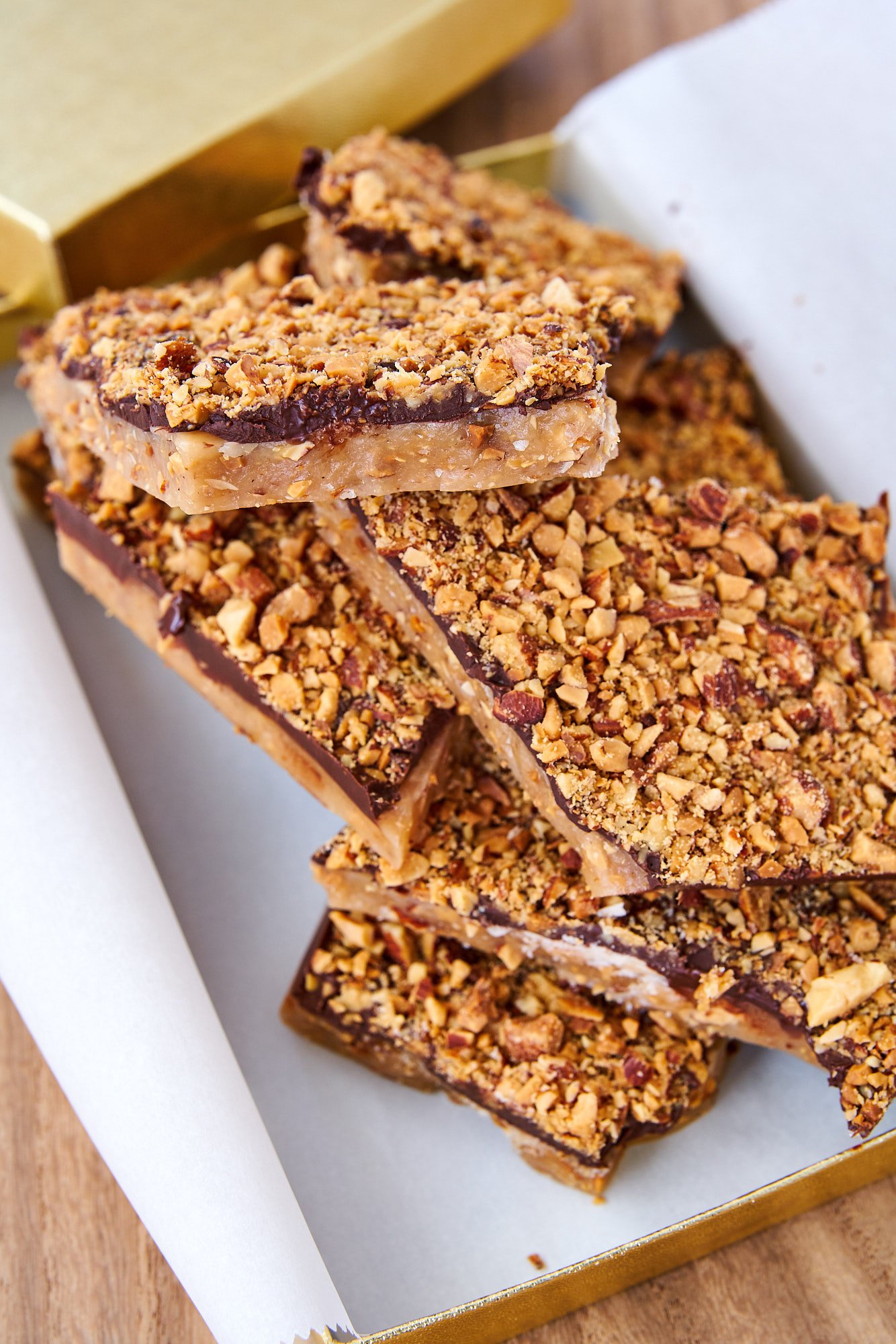 I know it’s not exactly holiday baking season yet, but I picked up a box of Ruth’s Toffee while I was in Colorado a few weeks ago and it was good… like hide-in-a-closet-and-eat-the-whole-box good. As with anything so tasty, it didn’t last long, so I’ve spent the week making mistakes and perfecting this almond toffee recipe so that it’s nearly impossible to mess up.

Although it often goes by the name of “English Toffee” in the US, this is just one of the many styles of toffee in the UK, and it’s more commonly known as Buttercrunch over there. The main difference with other styles of toffee is the copious addition of butter, which gives it the flavor of a soft caramel, yet because the sugar is only brought to the hard crack stage, it has a crunchy texture that’s indescribably addicting.

Brittles are another type of candy which involves cooking sugar to the hard crack stage and adding nuts, but butter toffee has a significantly different texture due to the addition of copious amounts of butter. Brittles tend to be very hard and crunchy, while butter toffee is hard at first, but almost immediately melts into a glorious pool of sweet buttery goodness. 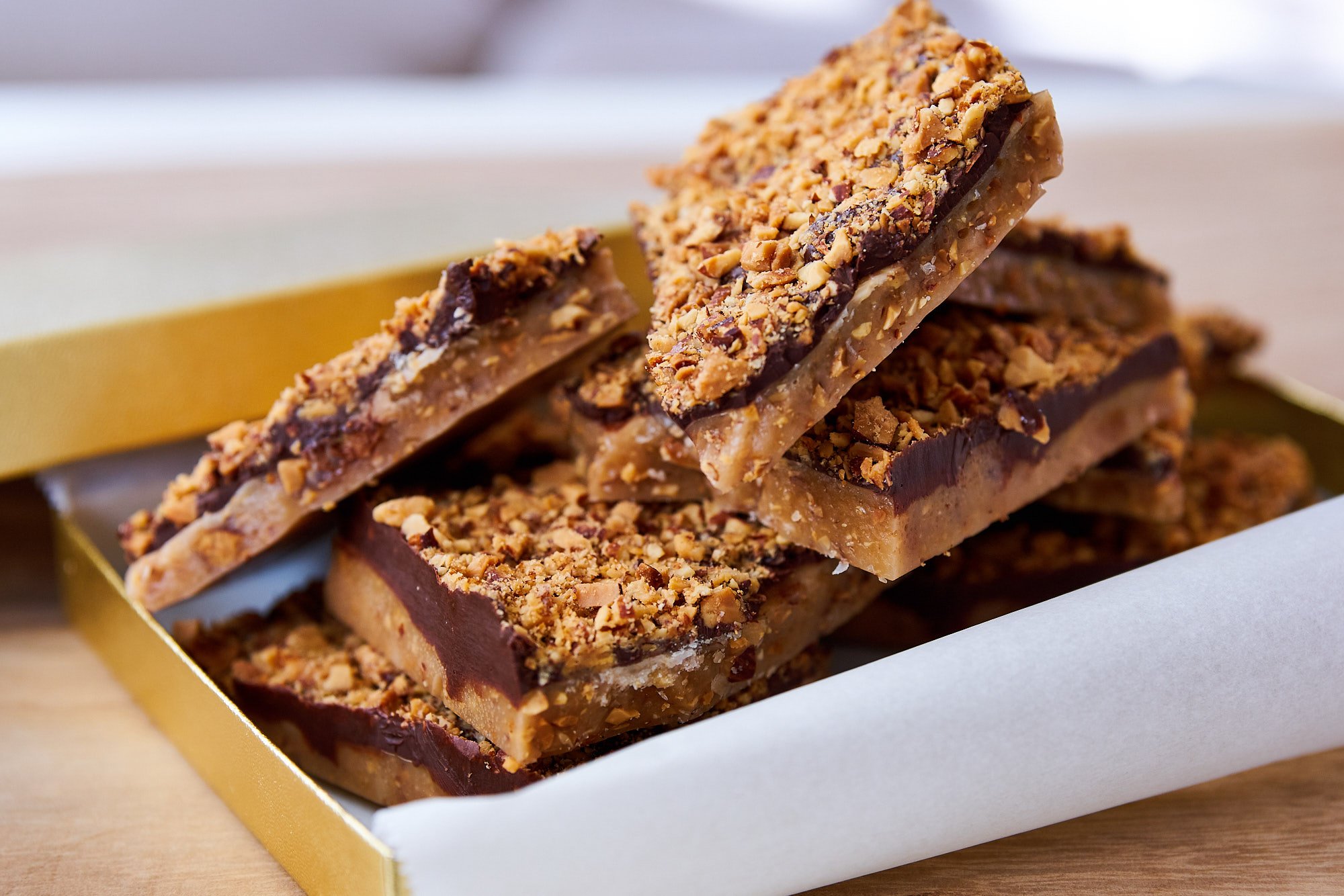 If you’re not sold yet, the best part of this almond butter toffee is that it’s ridiculously easy to make. Butter, water, corn syrup and sugar just get boiled together until they reach 300 degrees F at which point some vanilla and roasted almonds are added. This gets dumped on a non-stick surface to cool. You don’t even need to worry about melting the chocolate separately as it melts itself on the warm sheet of toffee!

The only place that you could get hung up on is having the sugar crystalize on you part of the way through, in which case the sugar and butter separate when it finally melts again. To avoid this, I’ve made two alterations to the traditional recipe that makes it almost impossible to fail. The first trick is to add an invert sugar such as corn syrup or honey. Unlike table sugar, which consists fructose and glucose molecules bound together to form sucrose, invert sugars consist of free glucose and fructose molecules. The small molecules are like throwing an off-brand of blocks into a box of Legos, making it very difficult for the sucrose to crystalize because the different sugar molecules don’t fit together neatly.

The second trick is to add the sugar in the center of the pot, covering it with a lid, and boiling it with the butter mixture without stirring it at first. This prevents granules of sugar from sticking to the sides of the pan, which can later fall back into the toffee causing it to crystalize. Once the sugar is fully melted you can uncover it and stir it continuously to ensure that it browns evenly.

After the toffee has cooled it easily snaps into pieces by hand, but if you want to cut the toffee into bite-size pieces, a hammer and a clean wide chisel works great. Just be careful not to smack it too hard or you’ll have pieces of toffee flying all over your kitchen! I like to store my butter toffee in the fridge because it gives it a better texture, and it also has the added benefit of making it keep longer (not that this would ever be a problem given how quickly it will disappear). 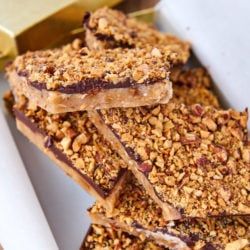