I had a lot of great food in Singapore and while I couldn’t pick a favorite, there were some dishes that stood out: like Biryani at Tanjong Pagar Railway Station, or Hainanese Chicken Rice at Maxwell Hawker Center. One dish that stuck with me throughout the rest of my sojourn in Asia was something I had early one morning at Changi Airport as I was leaving for Japan. I had dreams about it, and all I could think about upon returning home was picking up some spareribs so I could recreate it, before my taste memory faded away.

Bak Kut Teh (肉骨茶) is a spare rib soup that’s popular all over Southeast Asia, with several countries claiming to be the originator. The name literally means “meat bone tea”, and the generally accepted creation legend is of a laborer from southern China bringing the dish to Klang, Malaysia, where it spread to neighboring Singapore and Indonesia.

I made the Teochew style Bak Kut Teh which seems to be more popular in Singapore (see Davina’s comment below). Unlike the Hokkien style Bak Kut Teh, which is darker in color and more heavily spiced, the Teochew variety is prized for its clear peppery broth. For my version I added green papaya and fried shallots, which I realize isn’t very traditional, but they add a nice textural and flavor element to the dish.

In a glass cup to demonstrate the clarity

The small number of ingredients and clear soup belies the robust flavour in this breakfast dish. If anything, I’ve found that clear broths carry the pure essence of the meat, whether it’s Bak Kut Teh, chicken soup or Bulalo, because impurities that cloud the color can also muddy the flavor.

Getting a soup such a Bak Kut Teh clear isn’t complicated, but there are some steps that need to be followed in order to end up with a clear, rich soup. The trick is to give the bones a cleansing first boil, followed by a scrub, and long simmer in fresh water. Stocks get cloudy from the blood and coagulated proteins that come from the meat and bones as it cooks. By giving it an initial boil to set the proteins and a wash and scrub with clean water, only a small amount of this gunk will come out once you put the meat and bones back into a clean pot of water. The long simmer releases all the flavor trapped in the meat and bones without any of the broth clouding components. 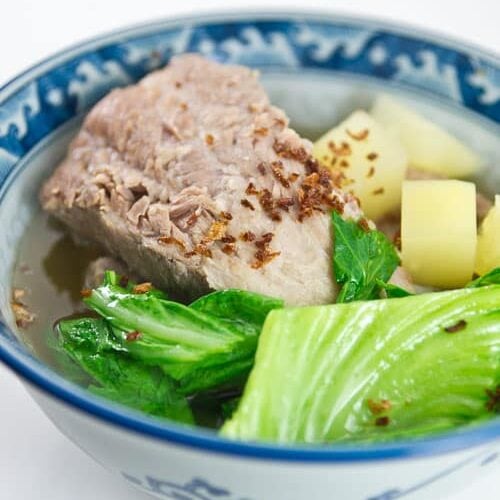 What do you think?24 Cancel reply