A few months ago, I got an email from a reader who’d made my Best Pork Chops and was wondering what my version of a “Best Burger” would be. My response was that there really isn’t a such thing as a best burger since there are so many styles of hamburgers. Change the meat, seasonings, toppings, and condiments and you can come up with all sorts of awesome combos. I’ve written before about some of my favorite burger variations like my Hoisin Burger and this Lamb Burger, but after getting Tim’s email, it occurred to me that I’ve never written about my perfect cheeseburger.

I suppose making a cheeseburger seemed like a such a no-brainer it didn’t really seem worthy of getting a dedicated post. But this blog is all about technique, and making a good burger is almost 100% in your technique. That’s why I decided to outline my framework for creating the best cheeseburger along with a recipe for my hamburger sauce.

Ingredients for the Best Hamburger 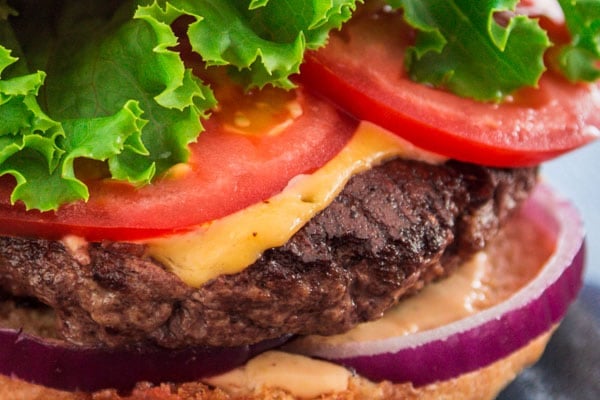 This is one area where everyone’s an expert and no one agrees. Some people will tell you that the secret to a good burger is all about the cheapest chuck you can find, while others will argue for wagyu short ribs. Like most points of contention, I think the truth lies somewhere in the middle. First, I should start off by saying that I judge the meat in a burger by its flavor, moistness and texture.

Flavor is affected by everything from how the cow was raised and what it was fed, to the cut of meat, and the amount of fat it contains. While wagyu may win on marbling and tenderness, grass-fed beef beats out corn-fed wagyu any day in the flavor department. Since tenderness and marbling aren’t really factors when you’re grinding the meat, if you’re buying expensive beef for your burgers, go with grass-fed. That said, even commodity beef sold in supermarkets across America can have decent flavor if you chose the right cuts.

As a general rule, muscles that get more work are tougher but have more flavor. Chuck taken from the shoulder is a well worked muscle that’s full of flavor, but can be tough and fibrous. At the other end of the spectrum you have tenderloin, which is very tender, but because the muscle(which lies under the ribs) sees little exertion, it’s a little weak in the flavor department. For making hamburgers, a blend of the tough cuts is not only cheaper it tastes better as well.

The problem is that really well worked muscles can be lean. You’ve probably heard the saying that “fat=flavor”. While this might be overgeneralizing, when it comes to meat, it’s generally true. The fat is also what gives a hamburger its moistness, especially if you are going to be cooking it well done. That’s why I like to make my hamburger with a blend of a few cuts of beef to get a good balance of flavor and fat.

The blend I chose depends on what looks good when I head to the butcher, but I generally use a mix of chuck, short ribs and hanger steak. Chuck and short ribs provide a good deal of fat. Hanger steak on the other hand tends to be lean, but it’s the most flavorful cut of meat from the cow. I don’t fuss over the ratio too much, but you want the ground beef to contain about 25% fat. This sometimes involves having the butcher add some extra fat when he’s grinding your chosen meats.

That leaves us with the final criteria: texture. For me, the perfect burger is crumbly and tender with a bit of crispness around the edges. To achieve this texture, it’s important not to handle the meat too much after it’s been ground. If you mix it together with seasonings, you start losing the small air pockets, which is what makes the burger crumbly. That’s why it’s best to avoid the temptation of mixing things into the burger patty itself. If you must mix something in, do it gently and don’t overmix it. Chopsticks work pretty well for this as the long thin rods prevents the pieces of meat from getting mashed together.

Another component of burger making that’s hotly contested is the cheese. A food snob might argue for an aged clothbound cheddar, while a hamburger purist might argue for processed cheese.

Personally, I think there’s a time and a place to use fancy cheeses, but if you want a real American cheeseburger, you have to use American Cheese. You know, the stuff that glows orange, and comes shrink-wrapped in individual slices. I know I’m always harping on about reducing your intake of processed foods, but this is one guilty pleasure I permit myself from time to time. Natural cheeses just don’t melt into a gooey creamy sauce the same way, and there’s something about the flavor profile of the pseudo-cheese that’s uniquely suited to mating with the caramelized surface of your hamburger patty.

I’m mostly a traditionalist when it comes to all the other aspects of a hamburger, but I have to concede on the bun. Those unnaturally airy buns with their collapsing domes, haphazardly speckled with albino sesame seeds used for most burgers just don’t cut it.

Call me a traitor, but I have to defer to the French on the bread making. Specifically, I can’t think of anything better than brioche for sticking a hamburger on. These tender pillows of buttery bread, with just a hint of sweetness, holds each patty in its embrace, absorbing the glorious burger juices without getting soggy. Besides, with loads of butter and sugar, it seems that we have more in common with the French than we’d like to admit!

You can find my recipe for a quick whole wheat brioche bun over at PBS Food.

The rest of the hamburger is up to you. For me, it all depends on my mood. Sometimes I’m feeling traditional and go with crisp pungent onions, sweet juicy tomatoes, fresh verdant lettuce and a smattering of condiments such as ketchup mayonnaise and mustard. Other times, when I’m feeling carnivorous, I’ll omit all the veggies in favor of my hamburger sauce mixed with some caramelized onions.

How to Make the Best Burger

Aside from the ingredients, the rest is all about technique. My trick to getting the perfect burger with crisp caramelized meat juices on the outside with a tender juicy interior is to use what I call the “Skillet Smash”. By forming the patties into thick pucks and then smashing them into the griddle with a heavy cast-iron skillet, you can get your burger to your desired thickness while ensuring the hamburger has excellent contact with the hot pan. This creates an unbeatable crust of browned beef on both sides of the burger while cooking the meat quickly and effortlessly. Then it’s just a matter of putting the thing together with your favorite toppings. 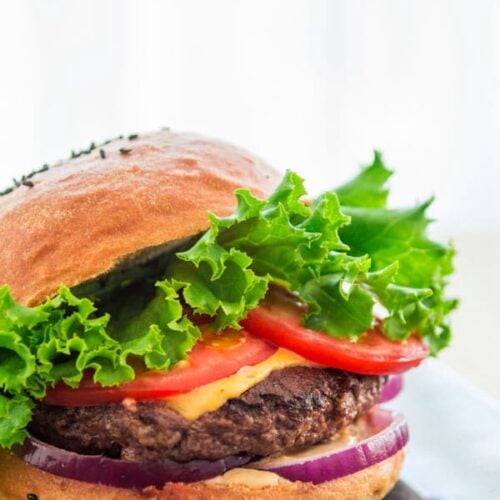 What do you think?27 Cancel reply