If you’ve ever “accidentally” poured maple syrup on your sausage, or ordered pigs in a blanket at your local greasy spoon, you know the gustatory pleasures where sweet and savory intersect. Like jumping into an ice-cold lake after a stint in the sauna or leaping from a plane with nothing but a sheet of silk strapped to your back, there’s something about contrasts that heightens your senses and makes you feel alive.

I love bread puddings because they use up stale bread and are ridiculously simple to prepare. Depending on what you put into them they’re versatile enough to make the transition from dessert to dinner side dish. I’ve even been known to serve a savory bread pudding for brunch. But I’ve never done breakfast bread pudding, an oversight I knew I’d have to correct the moment it registered.

Gears set in motion, I started to contemplate what a breakfast bread pudding would be like? French toast immediately came to mind as the closest breakfast proxy. It doesn’t take a stretch of the imagination to start thinking of all the tasty variations on french toast you could do with scraps of bread and a casserole dish. Vanilla beans, dried cranberries, and candied orange peels all seemed like safe bets, but for me, breakfast is about a balance of sweet and savory and this was starting to sound like a recipe for dessert.

Thats when I started thinking about the components in my perfect breakfast. Eggs? Sausage? Maple syrup? Check! Check! Check! Then I remembered a french toast I once made with cheese bread. Sweet, savory and with crisp bits of cheese oozing out around the edges. CHECK!

Concept finished, I set about making it happen. It’s not effortless, but there’s nothing complicated about it, and with a little forethought on a Saturday night, you can wake up to this delight on Sunday morning.

At the surface it looks like an ordinary bread pudding with a crusty top marked with fountains of crisp cheese bubbling up from beneath, like cooling lava. But dig in and you’ll reveal something more magical. Custardy chunks of french toast with meaty nuggets of sausage and veins of sharp golden cheddar coursing through it. Sweet and savory, creamy yet sharp, crisp but tender; it’s like a symphony of contrasts that’s so wrong and yet so right. 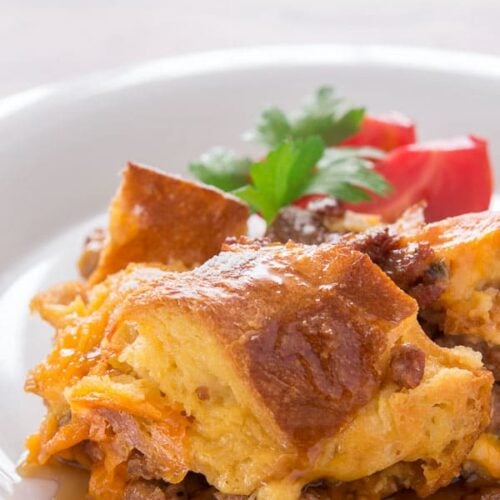