I’ve shared many Japanese dishes from my childhood here, but there are none with as many memories tied to it as Hiyajiru, a cold miso soup that’s a regional specialty of

I spent many childhood summers visiting my grandparents in a rural part of Miyazaki, Japan. Summer in Japan can be oppressively hot and humid; it’s the kind of humidity that smacks you in the face like a lukewarm mop.

The excitement of being in a new place always had me up before dawn, and the early morning hours provided a welcomed respite from the oppressive heat. This was also when ojiichan (grandpa) would take me fishing off a stone outcropping in the local bay and when hi-obaachan (great-grandmother) took me to her fields to harvest the bounties of summer for our first meal.

As the sun rose, and with it, the mercury, we’d head back to the shelter of home for breakfast. My grandparents have all passed, and Kadogawa is no longer quite as rural as it used to be, but this cold miso soup is a favorite that always reminds me of those magical summers. Hiyajiru (冷や汁), which means “chilled soup” in Japanese, is a regional specialty of the Miyazaki region. With chilled crunchy cucumbers in a cold sesame miso soup, it’s the kind of breakfast that can get your appetite going on even the most sweltering of days.

How to Make Cold Miso Soup

To prepare the cucumbers, trim one end off and slice them about 1/16th of an inch thick (1.6mm). If you’re in a rush, you can cut them thinner, making the salting step go faster, but I like the texture of these slightly thicker slices. If you have a mandoline, this is the fastest way to get consistent pieces, but be careful not to cut your fingers.

Once the cucumbers are sliced up, toss them with the salt so that each slice of cucumber is coated, and then let them rest for about twenty minutes. This allows the salt to soak into the cucumbers, starting the process of osmosis.

For the soup, you want to start by coarsely grinding the toasted sesame seeds. I like doing this with a mortar and pestle because it gives you more control over the grind’s coarseness, but you can also use a blender, food processor, or spice grinder.

Next, you want to add the sugar continue grinding the mixture until it resembles damp sand.

Assuming you’re using a mortar and pestle, add the miso and continue grinding until the ingredients are well incorporated. Then you want to add about a quarter of the dashi and mix this together. This step prevents the miso from forming blobs that are hard to dissolve. Once the mixture is nice and smooth, you can add the rest of the dashi and combine.

If you’re using a blender or food processor, you can add the miso and dashi in one step and pulse until the soup is mixed. If you used a spice grinder, dump the sesame mixture into a bowl and whisk in the miso and dashi.

Keep the soup in the refrigerator until you’re ready to serve it.

For the cucumbers, give them a good massage with your hand to release their excess water. They should be fully translucent when they’ve released enough water. Then you want to squeeze them with your hands until you can’t get any more water out of them.

To assemble the Hiyajiru, break up the clumps of cucumber into a serving bowl and then top with the cold miso soup. Garnish with shiso and myoga to taste. I also like to serve this with a side of shichimi togarashi for sprinkling.

How to Eat Cold Miso Soup

Hiyajiru is most commonly served along with a bowl of rice. You can eat them separately, but most people chose to spoon the soup and cucumbers over the rice. I usually like to rinse the freshly cooked rice in cold water to chill it and remove excess starch from the surface of the rice. This prevents it from getting gloppy and lukewarm when you mix it with the cold miso soup.

If you’re using day-old rice, I recommend reheating it once before washing it as older rice tends to retrograde, making it hard. By reheating it, you can rehydrate the starches before chilling (which doesn’t give it enough time to retrograde).

The turquoise serving bowl and rice bowl, as well as the gold leaf chopstick rest and condiment plate pictured above were sent over by Musubi Kiln. They have a fantastic selection of both classic and modern Japanese ceramics and tableware and they ship around the world. Get 5% off your order by using coupon code “NORECIPES” at checkout.

Hiyajiru ( 冷や汁) literally means “chilled soup,” and it’s a dish with a history that spans back over 700 years. It’s a popular dish in several regions of Japan, including Saitama and Yamagata, but Miyazaki prefecture is the most commonly associated area. There are many variations, but it’s most commonly a broth made with dashi seasoned with ground toasted sesame seeds and miso. In addition, it can include ingredients such as cucumbers, shiso, myogo, tofu, and grilled white-meat fish.

How do you pronounce Hiyajiru?

Hiyajiru is a four-syllable name pronounced as follows:

hi like heal
ya like yacht
ji like jeep
ru like the “ru” sound does not exist in the English language ,and the best way to make it is to say the word “ruse” with the tip of your tongue at the front of your mouth.

Can I serve Hiyajiru as a cold noodle soup?

Hiyajiru is traditionally served with rice, but it’s delicious with chilled udon, soba, or sōmen noodles. If you want to go for a low-carb alternative, it’s also delicious on silken tofu. 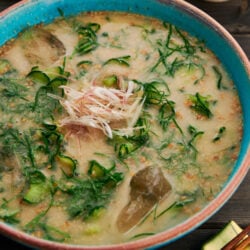