This easy egg toast recipe is packed with protein and can be thrown together in about 6 minutes, thanks to an easy kitchen hack. The trick is to use a tube of Japanese mayonnaise to pipe a border around the toast, creating a well you can fill with an egg and any other toppings you like. I used bacon, but cheddar cheese, gruyere, tomatoes, asparagus, or corn are all great options. Once the mayonnaise is toasted, it releases its oil into the bread, imparting a buttery richness, while the mayo on top solidifies, making it less creamy and more like cheese.

How to Make Japanese Egg Toast

Use a large spoon to compress the center of the bread, creating an indentation for the egg to rest. Next, unscrew the red top off your bottle of Kewpie mayonnaise and pipe out a border of mayonnaise around the edges of the bread.

Break an egg into the center of the bread and then season it with salt and pepper. Scatter some chopped bacon on top of the egg and then put it in a toaster oven for four to five minutes. You want the bread to toast up nice and crisp with the mayonnaise turning golden brown. At this point you should have a runny yolk, but carry over cooking will thicken it up a bit. If you want to a firmer yolk, you can turn off the toaster and let the egg yolk continue to cook with residual heat for a few more minutes.

Garnish your egg toast with scallions or herbs and serve immediately. 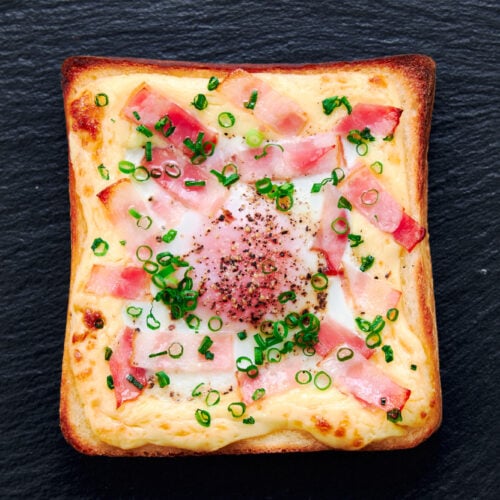