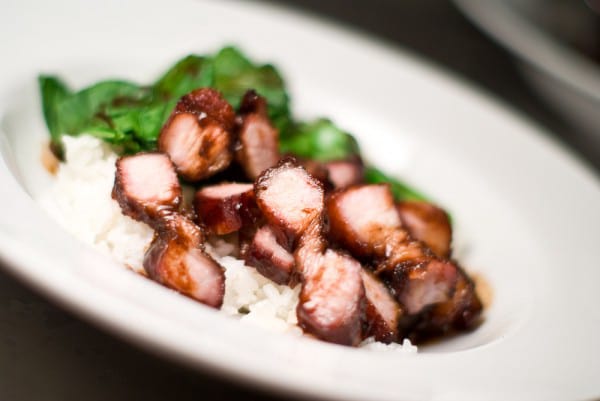 Take a stroll through any Chinatown in the world and you’re bound to see restaurants with strips of red char siu hanging from hooks in the windows. Char siu literally means “fork burned” which is a reference to the traditional preparation, skewered and barbecued over a fire. While you may not have had a chance to try it over rice or in noodle soup, you’ve probably had it chopped up in pork buns (char siu bao) at one point or other.

At its best, char siu is moist and flavorful on the inside and caramelized and slightly chewy on the outside, with a sweet aroma redolent of five-spice and garlic. Unfortunately, at many establishments (in the NY Chinatown), it’s overly sweet, grisly, artificially colored meat that’s been hanging under a heatlamp for hours.

In an effort to right the injustice done to this dish at many places, I set out to make my own Char Siu at home. Not some vaguely char-siu-like impostor, but a moist flavorful hunk of meat with the trademark deep mahogany color. I also wanted to do it without the addition of any weird additives like food coloring, msg, or ketchup.

I started by making my own 5 spice powder last week. Then I let my first batch marinate for 3 days and did a 2 temperature roast with the skin still on. This was a good start, but despite the very long soak, it wasn’t as well seasoned as I would have liked and the glaze wasn’t quite sweet enough. The skin also started burning before it has a chance to crisp, so I decided it needed a second pass before I posted. I fixed it on the second attempt by removing the skin, adding more soy sauce and maltose and roasting at a lower temperature before raising the temperature to char the edges.

Here are a few notes/tips on the ingredients:

What do you think?112 Cancel reply