Coconut shrimp is a delectable finger food that’s super easy to prepare and addictively delicious. Each bite is like a tropical beach vacation for your mouth with succulent shrimp covered in crispy shredded coconut. Most of the prep can be done in advance, making this the perfect way to wow your guests for game days and parties.

How  to Make Coconut Shrimp Sauce

Mix equal parts marmalade and Thai sweet chili sauce and squeeze in some lemon juice to taste. It’s that simple!

How to Clean and Devein Shrimp

I have an easy technique for deveining shrimp without slicing it open with a knife. The method uses a toothpick to pry the vein out of the shrimp, and you can watch the video below to see how to do it. You can also check out my post on How to Clean Shrimp for a more detailed step-by-step tutorial.

I also recommend removing the telson (sharp spike in the middle of the tail) and using scissors to cut the tips of the tails off. This is because the tail has a tendency to hold a pocket of water which turns to steam and causes it to pop. Cutting the tips off the tails lets you dry them off more thoroughly while giving the steam an escape route so the tails don’t explode.

How to Make Coconut Shrimp

You want to start by cleaning the shrimp (see above) and then brining it for about 10 minutes in a solution of 2 teaspoons table salt dissolved in 1 cup of water. This not only seasons the shrimp, but it also firms it up.

While you wait for the shrimp to brine, make the batter by whisking the egg and water together in a small bowl. When the mixture is uniform in color, add the flour and continue whisking it until there are no lumps in the batter.

Add 1-inch of oil to a heavy-bottomed pot with sides that come up at least 4-inches. Preheat the oil to 360° F (180° C). Line a wire rack with two paper towels to drain the fried shrimp.

Rinse the brined shrimp under cold water until it runs clear and drain them well. Use paper towels to dry the shrimp as thoroughly as possible. Pay particular attention to the tails, which tend to trap water.

Hold the shrimp by its tail and dip it in the batter to coat everything except for the tail. Put the battered shrimp on the shredded coconut and scoop some of it on top of the shrimp. Gently pat the top and sides to get the coconut to adhere and then transfer it to a tray. Repeat with the rest of the shrimp.

The coated shrimp can be prepared a few hours in advance and stored in the refrigerator until you are ready to fry and serve them.

Fry the shrimp in batches by lowering them into the oil and frying them until the coconut has crisped and browned, which should take about two to three minutes. Be sure to flip them once to ensure they brown evenly.

Drain the coconut fried shrimp on the paper towel-lined rack and serve them as soon as possible with the chili orange sauce.

What is Coconut Shrimp?

Coconut Shrimp is a dish made by “breading” shrimp with dried coconut instead of breadcrumbs. This gives the fried shrimp a lasting crispy texture and the sweet tropical flavor of coconuts. It’s usually served with a sweet and spicy sauce to dip the shrimp in.

Can I make this Coconut Shrimp gluten-free?

The recipe can easily be made gluten-free by replacing the flour in the batter with any gluten-free flour with enough starch to make the batter sticky. Rice flour, chickpea flour, and gluten-free AP flour are all suitable alternatives.

Can I air-fry coconut shrimp?

I don’t recommend it. I haven’t tried it with this recipe, but battered foods typically don’t work well in an air-fryer (basically a countertop convection oven).

What to serve with Coconut Shrimp?

Coconut shrimp makes for a delicious appetizer or finger food, but it can also be served on salads or as a main dish with sides. If you decide to serve it as an entre, I suggest serving this with some Garlic Rice or Garlic Noodles. It’s also delicious with Japanese Potato Salad or my No-Mayo Coleslaw. 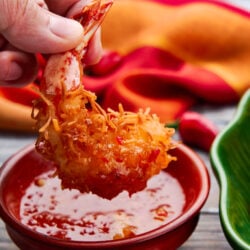