Why should I clean my own shrimp?

Peeling and deveining your own shrimp not only saves money, but the shrimp will taste better as unpeeled shrimp tends to be less processed and less prone to freezer burn than peeled shrimp.

What is the difference between shrimp, prawns, and scampi?

“Shrimp” and “prawn” are common names and do not correlate with scientific taxa. Although some claim that the term “prawn” refers to suborder Dendrobranchiata while “shrimp” refers to the suborder Caridea, the terms are not used that way in common parlance. Adding to the complexities is that there are geographical differences in the use of the two terms. In commonwealth countries such as the UK and Australia, the word for these Decapods is “prawn,” while in the US, smaller Decapods are called shrimp, while larger ones are often (though not always) called prawns. The bottom line is that the terms are used interchangeably, so there’s no real difference between the two names.

Scampi, on the other hand, is the name used for Nephrops Norvegicus, which is also known as Dublin Bay prawn and Langoustine. They look like a cross between a shrimp and lobster, having long thing pincers. The confusion here is that in North America, there is a dish called “Scampi” which is made with shrimp cooked in butter with garlic.

How to select fresh shrimp

Before you even start cleaning it, it’s important to select high-quality fresh shrimp, and there are few factors to consider here.

Head-On vs., Unpeeled vs. Peeled and Deveined

Raw shrimp come in one of three ways. Head-on shrimp have not been processed, and as the name implies, they include the head. Unless the shrimp have never been frozen, and are very fresh, I usually don’t like buying head-on shrimp as the heads can smell bad, and do not defrost well.

Unpeeled shrimp have had their heads removed, but they have not had their shells removed. I usually buy my shrimp like this for a few reasons. The first is that they tend to be cheaper. The second is that they are less likely to have been processed with chemicals to plump them up. Finally, the shell protects the meat when they’re frozen, so they’re also less likely to be freezer burned.

Peeled and deveined shrimp have had their shells removed, and have been split down the back so the vein can be removed. These shrimp are almost always processed with sodium tripolyphosphate, which makes the shrimp retain water, making them bigger and heavier than they actually are. Aside from the potential health consequences of the chemical additives, I find these shrimp to have the least amount of flavor and an unpleasant texture.

If you’re in the US, you’ve probably seen shrimp being sold with numbers such as U/12, 26/30, etc. These numbers correspond to the number of shrimp per pound. The larger the shrimp, the less there are going to be in one pound, so the number will be lower while higher numbers represent smaller shrimp.

Because the idea of shrimp per pound as a sizing measurement requires some explanation, some retailers have taken to assigning an adjective, such as “small,” “medium,” “large” to describe the size of the shrimp. Unfortunately, there is no official definition for these words, but here is the sizing guidance that the American Shrimp Processors Association publishes:

It’s worth noting that bigger isn’t necessarily better, and I usually select the size of the shrimp depending on how I plan to use them. Very large shrimp, for example, can be unbalanced in a pasta dish, but they’re great for sauteing and using whole.

Most shrimp you buy in the store is going to have been frozen at one point. Therefore, freshness is affected by three factors: how fresh they were when they were frozen, and how long they were frozen for, and how long it’s been since they were defrosted. By this measure, it is usually best to buy the shrimp still frozen as they’re marked with a packaging date, so you shouldn’t have to worry about the last two factors, and if it’s a reputable brand, they should have flash-frozen the shrimp shortly after harvest.

If for some reason, your fish market actually has fresh shrimp that have never been frozen, the two criteria you should look at are the appearance and smell. Shrimp will always have a briny smell, but they should not stink or smell like ammonia. The shells should be hard, and they should not be slimy. Color is not a great indicator of freshness, as some shrimp are processed in chemicals to help them retain a good color.

There are hundreds of varieties of shrimp in the oceans, but the most common types sold in stores in the US are Brown, White, Pink, and Tiger.

How do you defrost shrimp?

It is important to defrost your shrimp before you cook it. The best way to do this is to add the shrimp to a bowl of ice water. This minimizes the amount of damage done to the shrimp as it thaws, which results in better flavor and texture when you cook it.

How do you peel shrimp?

First, hold the shrimp with the legs facing up.

Grab ahold of the legs with your fingers and then pull them towards you, which should allow you to peel the bottom part of the shell as though you’re unwrapping a piece of candy.

Now repeat the same maneuver with the top part of the shell towards the tail.

To remove the tail, fan the tail out and pinch it between your thumb and forefinger.

This should squeeze the meat in the tail out, allowing you to pull the shrimp out from the tail with your other hand.

You can discard the shrimp shells or use them to make a stock.

How do you devein shrimp?

The “vein” running through the back side of the shrimp is actually its digestive tract, so it can contain sand and other undesirable things. There are two ways to devein shrimp. The most common method is to cut a slit down the back of the shrimp with a paring knife, which exposes the vein making it easy to remove. The problem with this method is that it splits open the shrimp, causing it to lose its shape and making it easier to dry out.

The best way to devein shrimp is to remove the vein with a toothpick. Once you get good at it, it’s much faster than the slitting method, and it leaves the shape of the shrimp intact. Here’s how to do it:

First, you want to hold the shrimp, so the back-side is facing you with the tail on top.

Insert a toothpick about two-thirds of the way up the shrimp, just to the right of center.

Now you should be able to pull the vein up and out of the shrimp using the tip of the toothpick. You can use your fingers to pluck the vein out, and then deposit it on a paper towel.

If the shrimp is dirty, rinse it off under running water and repeat with the rest of the shrimp.

Why should I brine shrimp?

Brining shrimp in an alkaline solution is a common trick used in Chinese cooking to give the shrimp a firm texture that snaps when you bite into it like a good sausage.  They even have a word for it (爽脆 – Shuǎng cuì).

I haven’t been able to find any information about the science of why this works, but brining the shrimp in a solution of baking soda and water for about 30 minutes makes a significant improvement in the texture of most shrimp.

The second advantage of raising the pH of the shrimp is that it makes it easier to brown, which allows you to get the most flavor out of the shrimp without overcooking it.

How do I brine shrimp?

Add 2 cups of cold water and a 1/2 tablespoon of baking soda to a bowl.

Stir the mixture to dissolve the baking soda.

Add the  shrimp and make sure it’s fully submerged under the liquid. Let this brine for at least 30 minutes.

Drain the shrimp and then rinse it thoroughly with cold water. 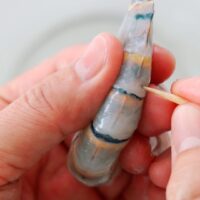 How to Clean Shrimp

How to Clean Shrimp

How to Clean Shrimp Video

This video is a recipe for shrimp and grits, but it shows how to peel, devein and brine the shrimp.