Edamame is the Japanese name for immature soybeans, and they’re most commonly prepared as a snack or appetizer by boiling them in their pods in well-salted water until they are tender. Once cooked, the beans can be popped out of the pods as you eat them, or they can be shelled and tossed into salads, rice dishes, or stir fries.

Aside from being delicious and colorful, edamame is packed full of nutrients, so this is one snack you can munch on without feeling an ounce of guilt.

Edamame is high in fiber and protein and contains loads of vitamins and minerals. Here are five reasons why edamame is so good for you:

Packed with 16.9 grams of protein per 1 cup serving, edamame isn’t just high in protein. Soy protein is also a complete protein, loaded with the nine essential amino acids that our bodies require to function. These include histidine, isoleucine, leucine, lysine, methionine, phenylalanine, threonine, tryptophan, and valine. Unlike the other amino acids, the human body can’t produce these ones, so we need to get them from food in order to survive.

Soybeans are a legume, and like most legumes, edamame contains loads of fiber, 8.1 grams per serving to be specific.

Edamame contains significant amounts of Vitamin C, Vitamin K, Thiamin, and Riboflavin, but where it really shines is in its Folate content (a serving contains 121% of the recommended daily value). Also known as Vitamin B9, Folate is essential in the production of blood cells and the synthesis of DNA.

With over 20% of the recommended daily values of iron, magnesium, phosphorus, copper, and manganese, edamame is also a good source of calcium and potassium.

Soybeans are a rich source of phytonutrients like isoflavones, saponins, phytosterols, and carotenoids.

Edamame (枝豆) is the Japanese name for immature soybeans and literally means “stem beans,” presumably because they were traditionally sold with the stems still attached. Like most beans, soybeans are sweeter and have more umami due to higher concentrations of sucrose and amino acids before they are fully mature. While it’s unclear who first started eating soybeans before they were fully ripened, the taste probably played a big part in enjoying the beans young.

These days, the most common method of preparation is to boil them in salted water and enjoy them straight from the pods, but these lime green beans can be used in everything from soups such as Kenchinjiru to sweets such as Zundamochi.

How do you pronounce edamame?

Edamame is a four syllable Japanese word and is pronounced eh-da-ma-meh. 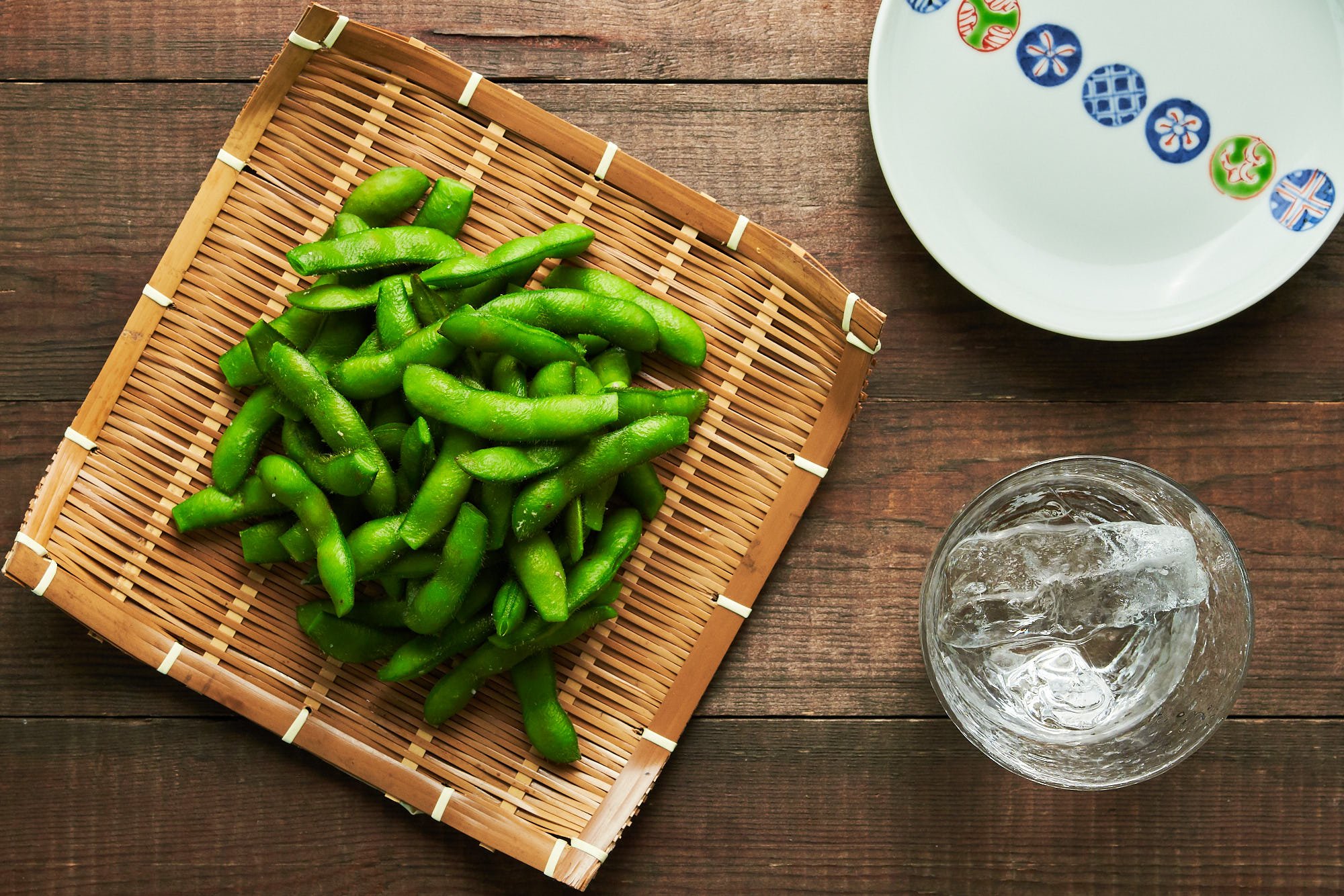 Why is edamame so nutritious?

Edamame is one of the few plant-based foods that can be considered a complete protein, meaning it contains adequate portions of the nine essential amino acids, humans need to survive. This makes it an excellent source of protein for people trying to reduce their meat intake.

Soybeans are low in carbs relative to their protein content, and they have a low glycemic index, which allows them to give you energy without raising your blood sugar.

As if that weren’t enough, edamame is also a good source of dietary fiber, vitamin K, and B vitamins such as folate, thiamine and riboflavin and they are full of minerals such as manganese, phosphorus, magnesium, iron, and calcium. 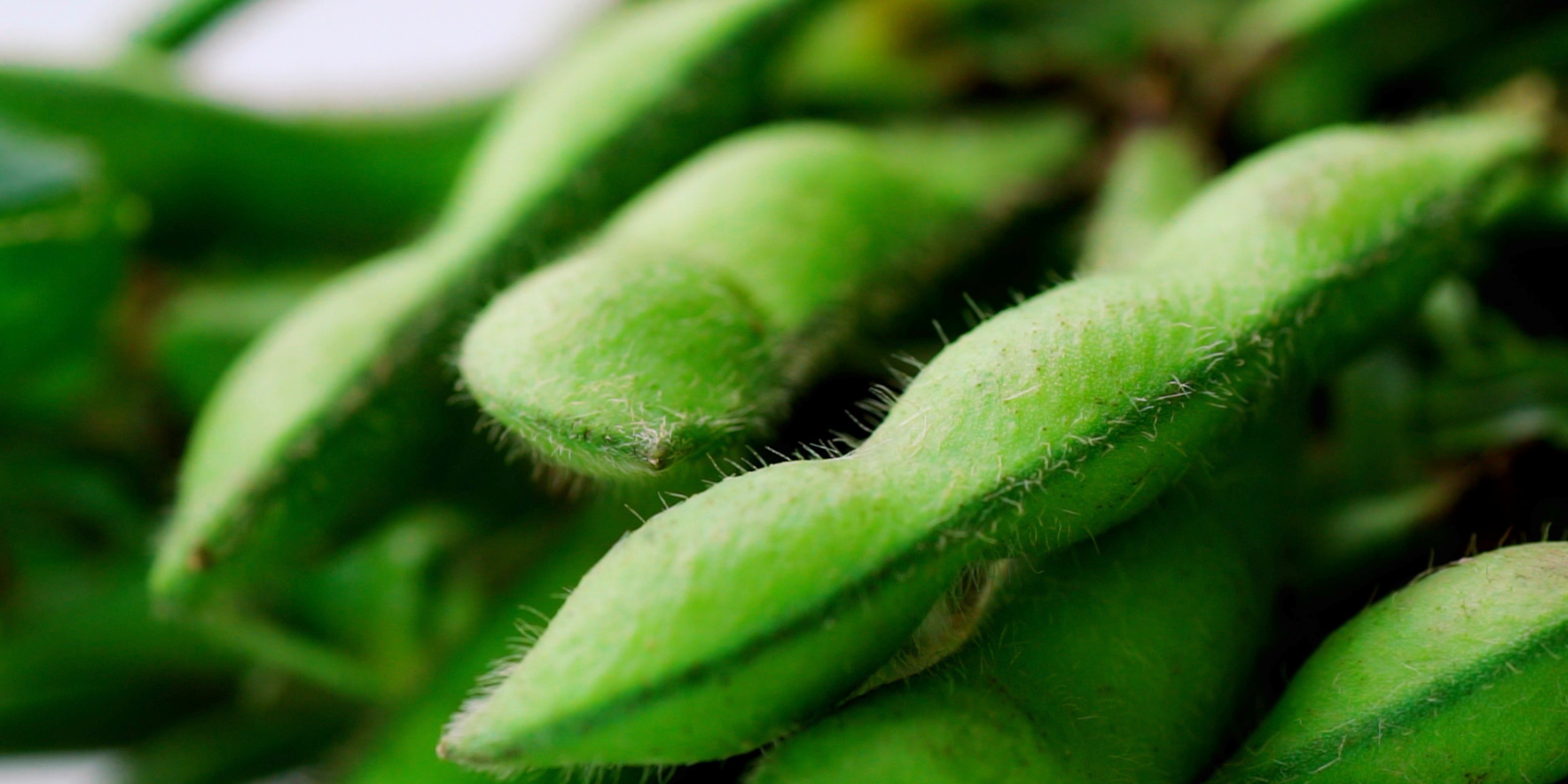 What are the benefits of edamame?

There’s a lot of misleading information on the Internet saying that soy products do everything from lowering the risk of heart disease to preventing cancer. The truth is, many of these assertions are backed by observational studies, which can only establish correlation. For example, this study finds a correlation between the consumption of soy and a reduced risk of prostate cancer. But it doesn’t mean anything because it does not identify the mechanism by which the risk is reduced. Perhaps the reduction in risk is because people who eat soy also eat less meat, or maybe people who eat soy tend to exercise more. Basically, observational studies are only useful for identifying areas that should be further researched, and they are not a good way for people to decide what to eat.

The bottom line is that you should eat edamame because it’s nutritious and delicious, not because you think it might cure or prevent some ailment.

How do you to select edamame?

Like many vegetables, sugars in edamame start turning to starches the moment they are picked, so it’s important to use fresh beans. The best way to get them is to buy the whole plant with the leaves and roots still attached, but if you can’t find them whole, try looking for pods that have a thick layer of fuzz on the pods, without any discoloring such as scratches and bruises on the pods.

If you can’t find fresh edamame near you, frozen ones can be a good option as they tend to be frozen shortly after being picked to preserve their freshness. The frozen ones come in two varieties: precooked, which makes them ready to eat, and raw which need to be boiled. 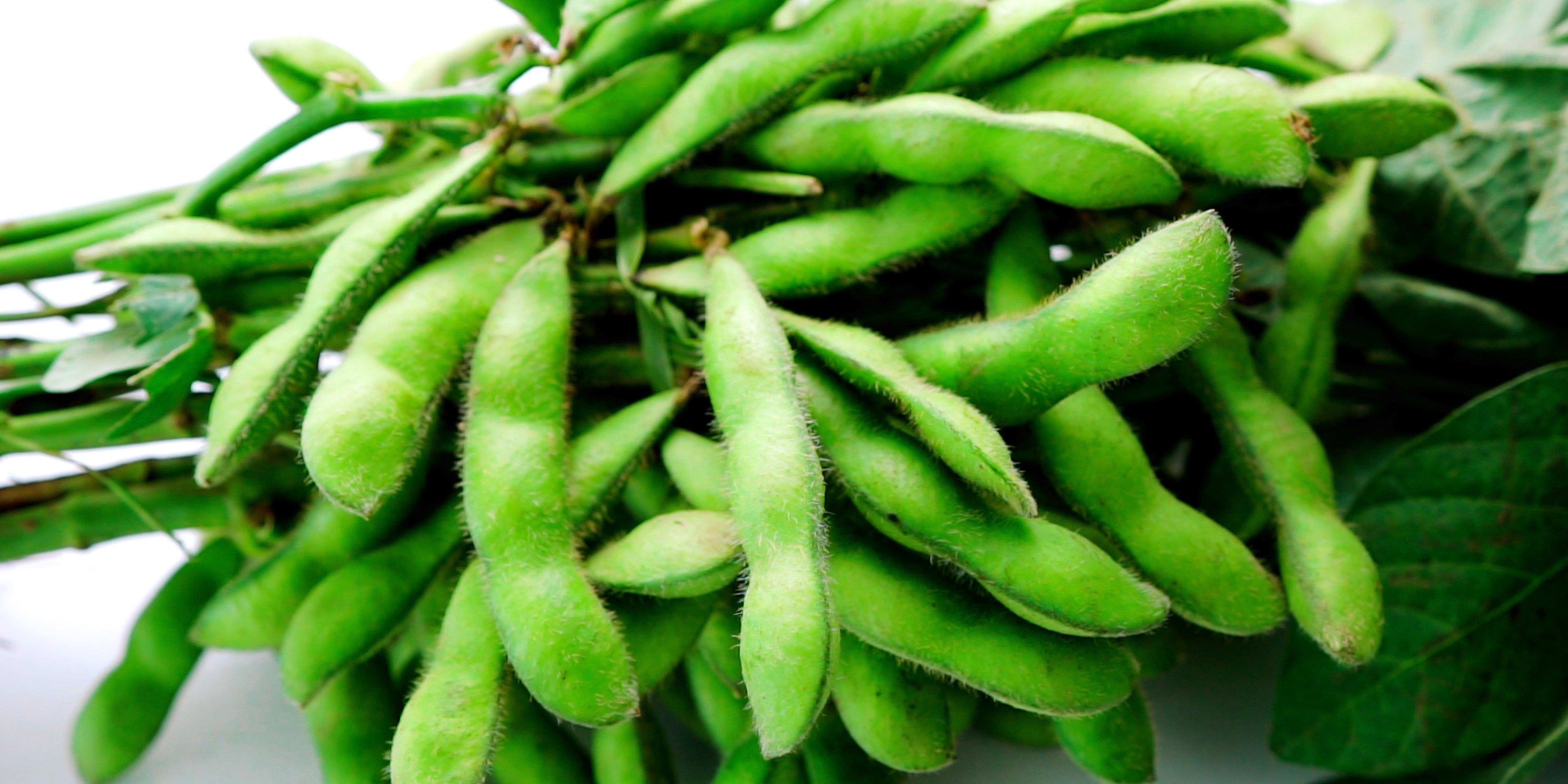 How do you prepare edamame?

For precooked frozen edamame, all you need to do is defrost them, and you can eat them cold. If you want them hot, you can warm them up in the microwave. The boiled ones are also typically salted, so you don’t even need to season them.

For frozen raw edamame, you can follow the directions below for making fresh edamame as all of my tricks apply to the frozen ones as well.

For fresh edamame, the first thing I like to do is to cut the tips of the pods off. If the pods are still attached to the stems, you need to do this to get them off the stems anyway, but I do this even for edamame that have already been removed from the stems. The reason is that by cutting the top of the pod off, you open a small hole that allows the salt water you boil the edamame in to penetrate the pod and season the beans inside.

The next step is to scrub the soybeans with salt and a bit of water to remove all the fine hairs on the pods. This isn’t necessary, but it makes for a more pleasant eating experience as you won’t end up with fuzz in your mouth. Then you just rinse the salt off the pods, and they’re ready to cook

How long do you boil edamame?

I usually boil fresh edamame for six to nine minutes in water that has enough salt added to make it taste like the ocean (about 4% salt). The length of time will depend on the size and thickness of your pods, so I usually start testing them around the six minutes. The pods should easily release the beans into your mouth when you bite down, but the pods themselves shouldn’t disintegrate as they don’t taste very good. 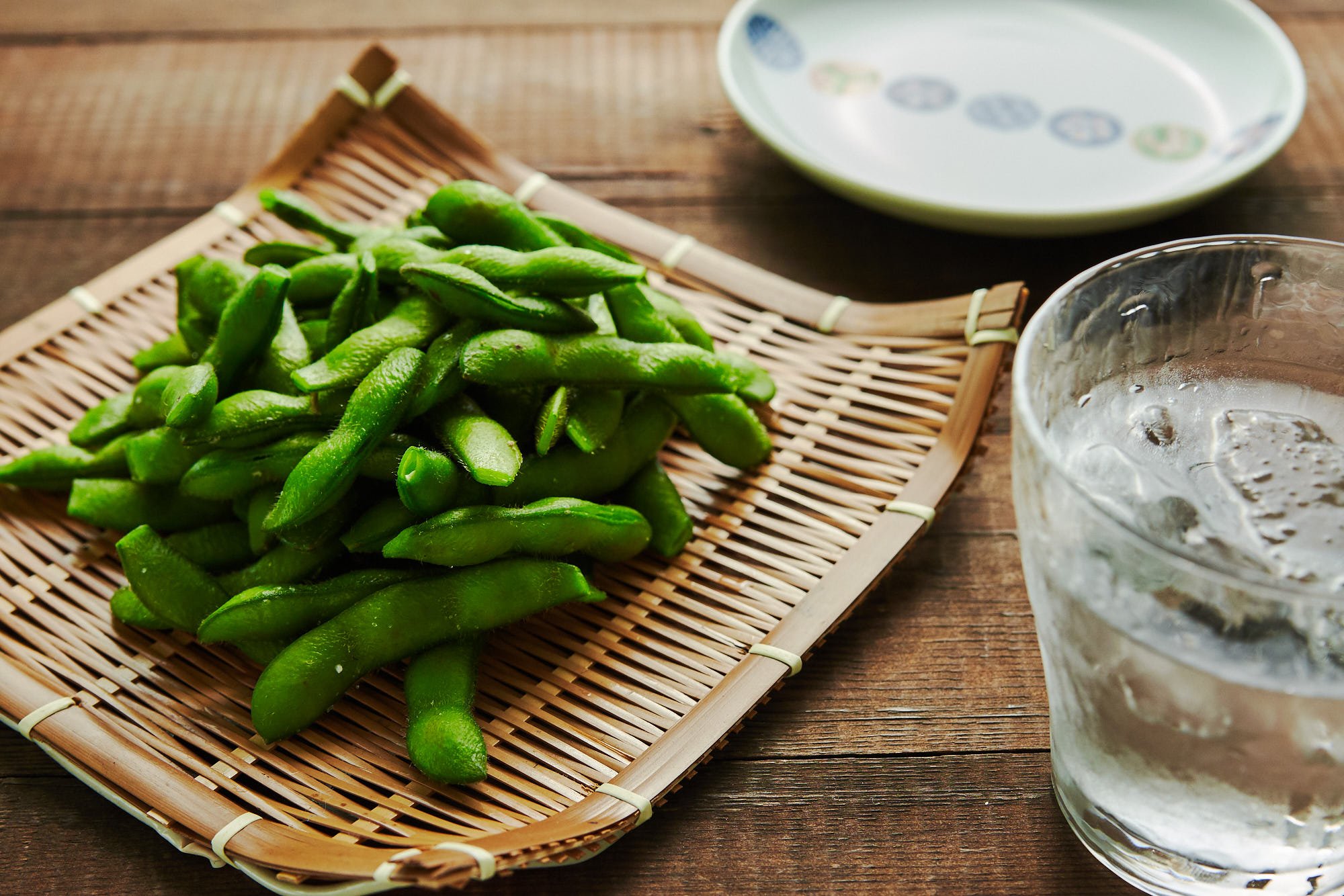 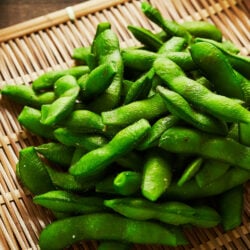 How to Cook Edamame

How to Cook Edamame Video