Hokkaido, is Japan’s northernmost island and was my home for my first 3 years back in Japan. With wide open pastures and coastal waters loaded with some of the best seafood in Japan, it’s the landscape looks more European than Japanese, and as the field would suggest, it’s also the breadbasket of Japan. Hokkaido is the largest producer of staples, like rice, wheat, corn, potatoes, and dairy products in Japan, and despite the large quantities produced, it’s also among the best from a taste perspective.

While many of you may know it for the beer, Sapporo, the capital of Hokkaido is famous for being the home of miso ramen. With a rich pork base, seasoned with umami-rich miso, and noodles that are thick and curly, the style of ramen is perfect for the long snowy season and bone-chilling sub zero temperatures.

Nissin RAOH Umami Miso Ramen is loaded with the wonderful earthy flavor of miso and comes with broad noodles typical of a Hokkaido-style ramen. It only has 1 gram of saturated fat, though, so while it’s great for those watching their diet, it’s not quite as rich as the ramen I came to love during my stint up north. That’s why I’ve come up with a technique for fortifying the broth by sauteing some ground pork with miso before making the soup. This is a quick way to get the rich meaty flavor of the pork, as well as some fat into the soup.

To finish it off, I’ve topped this with a few ingredients commonly paired with miso ramen, such as bean sprouts, corn, and scallions before adding a pat of butter. Yes, you read that right, it’s not uncommon to find butter on a bowl of ramen up north. As ridiculous as it sounds, it adds some marvelous flavor while lending some body to the soup.

This isn’t a difficult recipe, but it is important to time things so that the toppings are all ready and the soup and noodles finish at the same time, otherwise, the noodles will get soggy, or the soup will become salty. Be sure to have all the ingredients prepped and at the ready before starting to cook anything.

In addition to Umami Miso, RAOH also has Umami Tonkotsu and Umami Soy Sauce flavors, so be sure to check those out as well.

P.S. This post was sponsored by our friends at Nissin, but as always, the opinions expressed are my own. 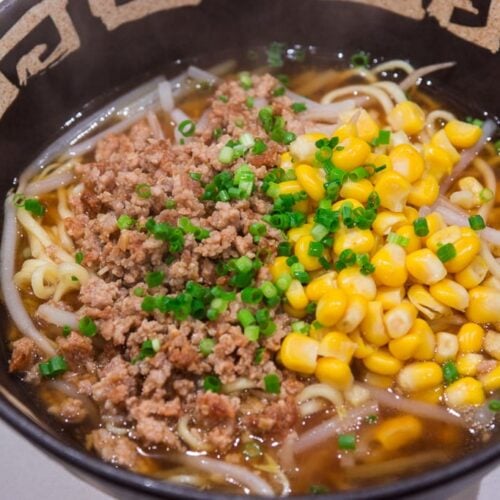