Tsukemono literally translates to “pickled thing,” and it’s the Japanese umbrella term for pickles. Unlike many Western pickles, Tsukemono are pickled in some combination of salt, soy sauce, miso, sake lees, or rice bran and don’t include any vinegar. Any tartness in the pickle is a result of lacto-fermentation, which converts the sugars in the vegetables into lactic acid, giving them a sour taste. These are known collectively as Furuzuke (古漬け), or “old pickles.”

Japanese pickles are inherently salty as the process is not only intended to preserve the vegetables, Tsukemono are eaten as a condiment for plain rice.

Given the long tradition of pickling vegetables as a method of preservation, there are hundreds of varieties of pickles in Japan with styles and ingredients specific to unique regions of Japan. Needless to say, there are enough varieties of Tsukemono to fill up a series of books, but in this post, I want to show you how to make three of the most common types of homemade pickles.

Referring to the time, rather than the ingredients used to make this pickle, Asazuke literally means “lightly pickled.” Although the name is usually used for pickles made with salt, the label could be used for any pickle that hasn’t started to ferment.

Shiozuke just means “salt pickle,” and it’s used to refer to any pickle that’s made using either salt or a brine made with salt.

Shoyuzuke means “soy sauce pickle,” and it’s used to describe food that has been pickled in soy sauce. This usually includes root vegetables such as carrots, burdock, and garlic, but it can also include other foods like salmon roe or mushrooms.

Why these Japanese Pickle recipes work

Depending on the region and season, pickles are made for a large variety of vegetables in Japan. The list below is far from exhaustive, but hopefully, it gives you some ideas on how to use vegetables you might have on hand.

How to make Tsukemono

While it’s possible to make Asazuke with a variety of vegetables, I like to make mine with either cabbage or napa cabbage along with a variety of other cut vegetables to add texture, color, and flavor. To ensure the vegetables pickle quickly, I julienne harder ingredients like carrots and mince the ginger. The cabbage itself gets cut into bite-sized pieces.

Once you have all of the vegetables prepared, weight them to calculate how much salt you need to add. In my case, I had 685 grams of vegetables, and I wanted to add 3% of the weight of the veggies in salt, so I added about 20 grams of salt.

Now you can add any flavorings you want, such as konbu and chili peppers, and then mix everything together.

Then I like to press the mixture with weights to speed the process up. The easiest way to do this is to pack the Asazuke into a zipper bag, and then sandwich the bag between two trays that are weighted down with cans.

The pickles are ready to eat when the vegetables have wilted and the cabbage has gone from opaque to translucent.

For my Shiozuke, I like to use a brine made from salt, sugar, water, and just a bit of sake. These ingredients get added to a zipper bag, along with a piece of konbu, and swished around to dissolve the salt.

I used baby cucumbers, so I didn’t cut them, but if you are using large cucumbers with big seeds, you may want to splice them in half lengthwise to remove the seeds and cut the halves into lengths that will fit in your bag.

Once you’ve added your cucumbers to the brine, it’s important to press out as much air from the bag as you can to ensure the cucumbers are fully submerged in the liquid.

Then you can let them pickle in the refrigerator. During the first week, they will retain their color and taste like salty fresh cucumbers. As they ferment, lactic acid bacteria will make the pickles increasingly sour, which will make them lose their color. As long as they are not slimy and don’t smell bad, they are safe to eat.

For the Shoyuzuke, you need to dilute the soy sauce with water in order to create a brine that’s not too salty. For dryer denser vegetables like carrots, I usually dilute the soy sauce down to about 10% salt, but for less dense vegetables like celery or cucumbers, you will want to bring the salinity down to 4-5%. I also add some sugar and konbu to the brine to balance out the saltiness while adding umami.

Soy sauce tends to stain the skin of carrots a dark color, which is why I like to peel the carrots before adding them to the brine. If you’re using smaller carrots, you can pickle them whole, but if they are thicker, you may want to halve or quarter them, so they pickle faster.

Add the brine and carrots to a zipper bag, and press out as much air as you can, and then seal the bag and let the carrots pickle for at least a few days. 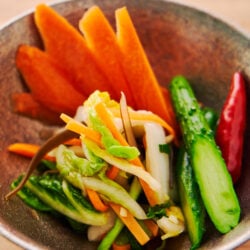 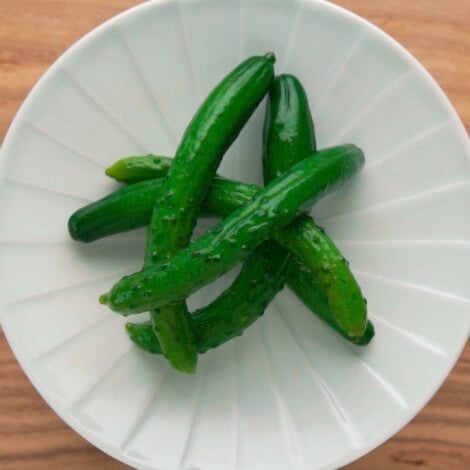 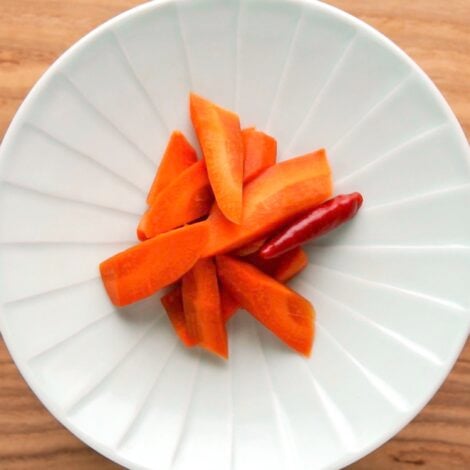