Throughout most of its history, Japan was an agrarian society centered on producing rice and vegetables. That’s why it’s no surprise that traditional Japanese food focuses on white rice, along with foods that go along with rice to season it. Japanese pickled cucumber is a popular summertime side dish; in my opinion, this is the easiest and most flavorful way of preparing it.

How to Make Wasabi

To prepare it, you first want to use a paring knife to trim away any dark areas. It’s necessary to pulverize the wasabi to get the most flavor from it. This releases an enzyme that activates the aromatic allyl isothiocyanate in the wasabi giving it its pungent flavor. This is traditionally achieved by grating wasabi on a sharkskin grater. You can also get a ceramic grater with burs that achieves a similar effect. I do not recommend using a rasp-type grater like a Microplane as this is not as effective at rupturing the cells.

When preparing wasabi, keep in mind that the rhizome grows from the bottom up. The area closest to the stems is the youngest and, therefore, more tender and flavorful. The opposite end is the oldest and tends to be more stringy. I recommend using the older side for these pickles and saving the good side for use with sashimi or sushi.

Fresh wasabi doesn’t keep for very long, so you can grate all of it and then pack the paste in a plastic freezer bag before flattening it out and freezing it. This makes it easy to break off and defrost portions of wasabi as you need it.

How to Make Japanese Pickled Cucumber

Wash the cucumbers well and then trim both ends off of each one. Next, slice the cucumbers into an oblique shape by holding your knife at a forty-five-degree angle to the cucumber and rotating it a quarter turn after each cut. The extra surface area of this cut helps pickle the cucumber quickly while preserving its crunchy texture.

Add the cut cucumbers to a non-reactive container or bowl along with the salt, sugar, beer, wasabi, and chili peppers. Stir the the mixture together until the salt and sugar have dissolved.

Cover, and let the cucumbers pickle in the refrigerator overnight.

What makes these pickled cucumbers Japanese?

Western pickles tend to be tangy because they either undergo lacto-fermentation or they’re brined in vinegar. In Japan, we have many styles of pickled vegetables or tsukemono (literally “pickled thing”), and drying and fermentation are two methods used to preserve fresh vegetables for winter. In summer, “lightly pickled” vegetables called asazuke are preferred because it allows you to enjoy the freshness of summer vegetables like cucumbers. In this style, the vegetables are soaked in a saltwater brine for a relatively short amount of time and are consumed before they start to ferment.

How do you pronounce Tsukemono?

Do these pickles contain alcohol?

Since the beer is not cooked, the pickles will contain some alcohol, but it is not a noticeable amount for most people. If you are worried about this, you can boil the alcohol off the beer before using it in this recipe.

Do I have to use beer?

It will not taste the same, but you can substitute water and a pinch of MSG for the beer to make these Japanese pickles.

Can the pickling brine be reused?

The brine can be reused, but because cucumbers release a lot of water into the brine, you will need to add more salt and sugar. Another option is to use the diluted brine as is and serve the pickles with soy sauce. 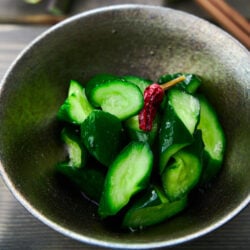 The nutrition information takes into the account the brine (which you won’t eat) so the values presented for calories, sugar and sodium are much higher than what you will actually consume.