Pickled sushi ginger or Gari (ガリ) is a Japanese pickle made by brining thin slices of young ginger in vinegar, sugar, and salt. It has a refreshing sweet and sour taste with a hint of spiciness, making it a popular side dish to serve with sushi.

How to Make Sushi Ginger

After you’ve washed the ginger well, cut off any pink shoots and set them aside. Then you want to segment the ginger into manageable pieces. Next, use a spoon to scrape off the skin. This is the best way to peel ginger because it allows you to get into the nooks and crannies around the nodes.

To slice the ginger, I like using a mandoline because it’s faster and more consistent, but you can do it with a sharp knife as well. The thinner you slice the ginger, the less spicy it will be. The thicker you slice it, the crunchier the texture will be. I like going with a thickness that’s about 1.5mm (.06 inches), which is about the thickness of a penny.

Boil a pot of water, and then add the ginger. Allow the water to return to a boil, and then cook the ginger for one to two minutes. The longer you boil it, the less spicy it will be, but the ginger will get soft if you let it go too long. Next, drain the ginger and set it aside. By the way, the liquid you drain off from the ginger is essentially shogayu (ginger tea), so if you like ginger, I recommend hanging onto it. It’s delicious warm or makes a refreshing herbal iced tea along with some mint and lemon.

To make the pickling brine, add the vinegar, sugar, salt, konbu, and pink ginger shoots to a non-reactive saucepan and heat it just long enough to dissolve the sugar and salt. Don’t let it boil, or you’ll lose too much acidity.

Put the ginger in a glass container or jar and pour the hot pickling brine over it. Stir everything together to make sure it’s well distributed, and then pat the ginger down, so it’s fully submerged. Let the sushi ginger pickle in the refrigerator for at least a day. It gets better for about a week though, so I recommend letting the ginger pickle for longer. Gari will keep for months in the fridge, so make a big batch and enjoy!

The grey bowl and gold chopstick rest shown in the photos above were sent over by Musubi Kiln. They have a fantastic selection of both classic and modern Japanese ceramics and tableware and they ship around the world. Get 5% off your order by using coupon code “NORECIPES” at checkout.

Gari (ガリ) is a type of Japanese pickled ginger that’s often served as a side dish for sushi. It’s made by pickling young ginger in a brine made out of rice vinegar, sugar, and salt, giving it a refreshing sweet and sour taste. The Japanese name “gari” is an onomatopoeia for the sound the ginger makes when you bite into it.

How do you pronounce Gari?

Gari is a two-syllable name that is pronounced as follows:

ga like gone
ri the “ri” sound does not exist in the English language, and the best way to make it is to say the word “ream” with the tip of your tongue at the front of your mouth.

Why is ginger served with sushi?

Although it’s often rumored that sushi ginger is supposed to prevent food poisoning from eating raw fish, this claim is highly unlikely. Various compounds found in ginger, such as Gingerol and Paradol, demonstrate anti-microbial activity, but this is unlikely to make much of a difference if you end up getting some bad fish. Instead, the more likely reason for serving gari with sushi is that it acts as a palate cleanser, allowing you to enjoy the next bite of sushi without having the taste of the last one linger in your mouth.

Why is Sushi Ginger pink?

Most commercially available sushi ginger has food coloring added to make it pink; however, Gari prepared the traditional way will have a coral pink hue. The color comes from the pink ginger shoots that are usually still attached to young ginger rhizomes. The vinegar extracts pH sensitive anthocyanins from the shoots and gives the sushi ginger a naturally pink color.

Can I use regular ginger for making Gari?

Young ginger is milder, more tender, and less fibrous than fully matured ginger, which is why it’s used for making Gari. If you can’t find it, you can still make it with fully matured ginger; however, you’ll want to slice it thinner, and I recommend boiling it a second time using fresh water.

As long as the sugar you use is plant-based, your gari will be too. 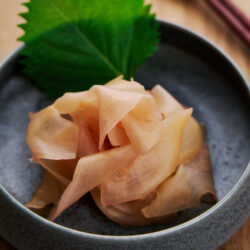