In Japan, the seasons play a central role in determining the flavors and colors of the food. While greenhouses and modern transportation networks allow “seasonal” produce to be had all year round, there’s an irresistible draw to the fleeting seasonality of ingredients. That’s why there’s still a great emphasis placed on the seasons.

Matsutake mushrooms are the embodiment of this fixation on seasonality with a primary season lasting just a few short weeks during fall. They have a bouncy, almost crunchy texture when cooked, and exude a clean earthy aroma reminiscent of cedar.

Like porcini’s and truffles, Matsutake mushrooms are difficult to cultivate, which means the ones you buy in the store where most likely foraged by hand by someone. Combined with their relative rarity and high demand and you have yourself one pricey fungus. Just one mushroom can fetch several hundred dollars in Japan and boxes can go for thousands of dollars.

Luckily for those of us in the North America, they’re pretty abundant in the Pacific Northwest and because they’re relatively unknown there isn’t a ton of consumer demand. I’ve seen them at farmers markets and upscale grocers for as little as $15 per pound, comparable to other foraged mushrooms.

While we don’t really think of rice as being new or old in the States, Shinmai (新米), or “new rice” is another hallmark of fall in Japan. Because fresh rice has a higher water content, it has a better texture and flavor than rice that’s been sitting on a shelf for a year.

Matsutake gohan (松茸ご飯) or “pine mushroom rice” combines these two seasonal delicacies into a uniquely fragrant rice dish that exemplifies the essence of Japanese cuisine. It’s simplicity belies the depth of complex flavours that come together in this humble bowl of rice, and its presence on menus heralds the coming of fall.

I like to cook the rice in konbu dashi because it boosts the level of umami in the dish without getting in the way of the mushrooms. This allows the Matsutakes to take center stage in this dish showcasing their unique texture and flavor.

Like a solo performance without a backing track, matsutake rice is made synergistically better with the addition of some mitsuba and sudachi zest to help accent the bold flavor of the mushroom. Mitsuba, which literally means “3 leaves” is an herb that looks a bit like giant cilantro, but it’s flavor profile is quite different with a fresh woody flavor that’s somewhere between carrot tops and celery. Sudachi, is a small green citrus that’s available in fall with a flavor profile that’s like a cross between green mandarins and grapefruit.

Both can be a little tough to find in the US, but they should be available in large Japanese grocery stores. If you can’t find them, you can certainly make matsutake gohan without them and you could try substituting other green citrus zest for the sudachi. 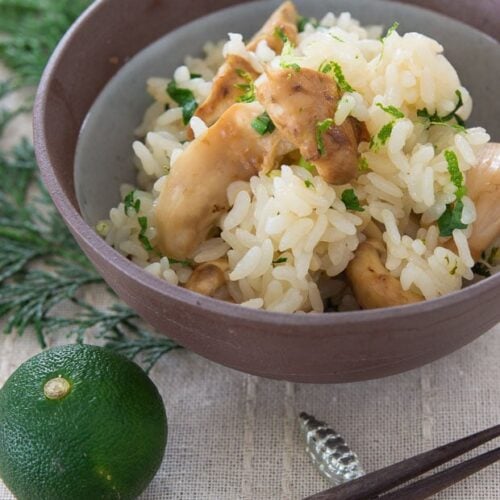