Although mentaiko is most commonly stuffed into onigiri or served with a bowl of rice in Japan, it’s a flavorful ingredient that can season dishes such as pasta or potato salad. Many bakeries in Japan sell mentaikopan (明太子パン), which is bread, that’s been slathered in mentaiko mixed with cheese, butter, or mayonnaise.

I’ve taken a slightly different approach for my version by turning this into a spread that doubles as a dip. This allows you to use it to make mentaiko bread, but you can also use it as a spread or dip for veggies.

How to Make Mentaiko Bread Spread

Add the mascarpone to a bowl, and then use a Microplane to grate in the garlic.

Zest in about a quarter of the lemon zest and then squeeze in about two teaspoons of lemon juice.

Mentaiko is held together in a skein by a membrane, similar to a sausage. To get the roe out of the skein, just cut one end open and press the roe out using your fingers or chopsticks.

Stir everything together until it’s evenly combined, and then you can adjust the tartness by adding more lemon juice if you like.

Garnish the mentaiko bread spread with chervil or flat-leaf parsley and serve with crusty bread and vegetables for dipping.

Mentaiko (明太子), also sometimes known as karashi mentaiko (辛子明太子), is cod roe that’s been salted and cured in a spicy brine. It originated in Korea, where it’s known as myeongtae (명태). Before myeongtae’s introduction to Japan, cod roe was most commonly cured in a salt-based brine to make tarako (鱈子). To this day, cured cod roe that is not spicy is known as tarako, whereas mentaiko refers to the spicy variety. It’s most commonly eaten as a condiment for rice, but it’s also delicious tossed with pasta or potatoes.

How do I make mentaiko bread?

Toasted mentaiko bread can be made by spreading this mentaiko bread spread onto a slice of sandwich bread or a small baguette cut lengthwise and then toasting it in an oven until the spread is lightly browned.

What is Mentaiko Bread Spread?

In Japan, mentaiko is often mixed with dairy products such as cheese or butter and spread on bread before being toasted. This bread spread recipe made with mascarpone, mentaiko, garlic, and lemon can be used as both a spread and a dip. It’s also delicious toasted on bread or served with a crusty baguette.

Can I make this spread with another type of roe?

I’ve only tried this with mentaiko, but any small and salty roe such as tobiko or bottarga should work in theory. Caviar could also work tastewise, but I think the color won’t be very nice. I would not recommend using larger roe like ikura.

What can I substitute for the mascarpone?

Cream cheese makes for a suitable substitute for the mascarpone in this recipe. One thing to keep in mind is that cream cheese includes more salt and is generally slightly more acidic than mascarpone. You may need to slightly reduce the amount of mentaiko and just the amount of lemon juice if you decide to use cream cheese. It is also much firmer than mascarpone, so you’ll want to bring it up to room temperature to be able to mix it. Sour cream can also be a suitable substitute, but you will want to omit the lemon juice and just use the zest. 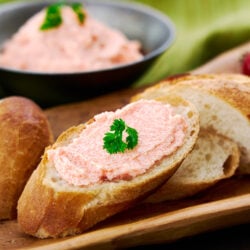