Despite its relatively short history, Mentaiko Pasta has become a classic home-cooked meal in Japan because of its favorable taste to effort ratio. It’s typically prepared by tossing boiled spaghetti with mentaiko (spicy cod roe) and cream. Although I’ve posted a cream-based recipe in the past, I personally prefer making this modern Japanese classic without adding cream.

How to Make Mentaiko Pasta

First, you need to make the sauce by removing the cod roe from the roe sac and whisking it together with olive oil and black pepper.

Then you boil the pasta in a small amount of salted water until it’s fully cooked.

Finally, the pasta is added to the bowl with the mentaiko sauce and tossed together with the butter until everything is well combined. The key here is to transfer the spaghetti directly from the pot into the sauce. This ensures some of the starchy boiling liquid makes it over into the sauce. Then you’ll want to ladle some of the water into the pasta as you toss it to keep the noodles nice and lubricated.

What is Mentaiko Pasta?

Mentaiko Pasta (明太子パスタ) is a Japanese pasta dish made by tossing spaghetti together with a sauce made using spicy cod roe (mentaiko). It was created in the 1960s at a restaurant in Shibuya called Kabé No Ana, which literally means “hole in the wall.” According to the creation story, a regular patron brought the chef a jar of caviar after a trip and asked him to prepare something with it. The pasta the chef came up with was so delicious that he wanted to add it to the menu, but caviar was not available in Japan at the time, so he turned to mentaiko instead. Today, mentaiko spaghetti is one of the most popular types of Japanese-style pasta, and there are even instant sauce packets that can be tossed with boiled noodles. Making it from scratch is easy, though, and once you do it, you won’t want to go back to the packs.

What’s the difference between Mentaiko and Tarako?

The word mentaiko (明太子) is a mashup of the Korean name for the fish myeongtae (명태) with the Japanese word ko (子), which means “child.” It’s typically used to refer to cod roe cured in a spicy brine, similar to how myeongnanjeot is prepared in Korea. Tarako (鱈子) literally means “cod roe” and can refer to any roe coming from cod, but it is most commonly used to describe brined cod roe that is not spicy.

Technically, it is cod roe as the fish it comes from, suketoudara (スケトウダラ), which is in the genus Gadus (cod). However, the common English name for the fish is “Alaska Pollock,” which is where the confusion comes from as pollock is usually used to refer to fish in the genus Pollachius.

How do you pronounce Mentaiko Pasta?

Both mentaiko and pasta are three-syllable words and are pronounced as follows in Japanese:

Is it possible to make Mentaiko Pasta with other types of roe?

I haven’t found a good alternative to mentaiko for this. Ikura is too big, and roe like tobiko (flying fish roe), masago(capelin roe), and kazunoko (herring roe) have a poppy texture that doesn’t work great for this. Bottarga made from mullet roe will work if it has not been dried, but you will need to change the ratio of ingredients if you use dried and grated bottarga. 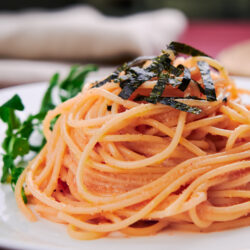