What is Orange Chicken?

Orange chicken is an American Chinese dish that’s made by battering and deep-frying pieces of chicken before coating them in an orange-flavored sauce. Like many Chinese-American dishes, Orange Chicken does have distant roots in China; however, it is not an authentic Chinese dish. That doesn’t mean it’s inherently bad, but unfortunately, many take-out shops go overboard on the batter and use artificial colors and ingredients.  The thing is, Orange Chicken is easy to make from scratch. Once you make it at home, you’ll never go back to the red pagoda clad paper boxes again.

Where was Orange Chicken Created?

Although orange chicken is a relatively recent creation, it’s unclear who invented it. What is reasonably certain is that it was developed in North America as a variant of General Tso’s Chicken or Sweet and Sour Chicken. The American fast-casual chain Panda Express claims to have invented it, and while this is difficult to prove, it is generally credited with popularizing the dish. 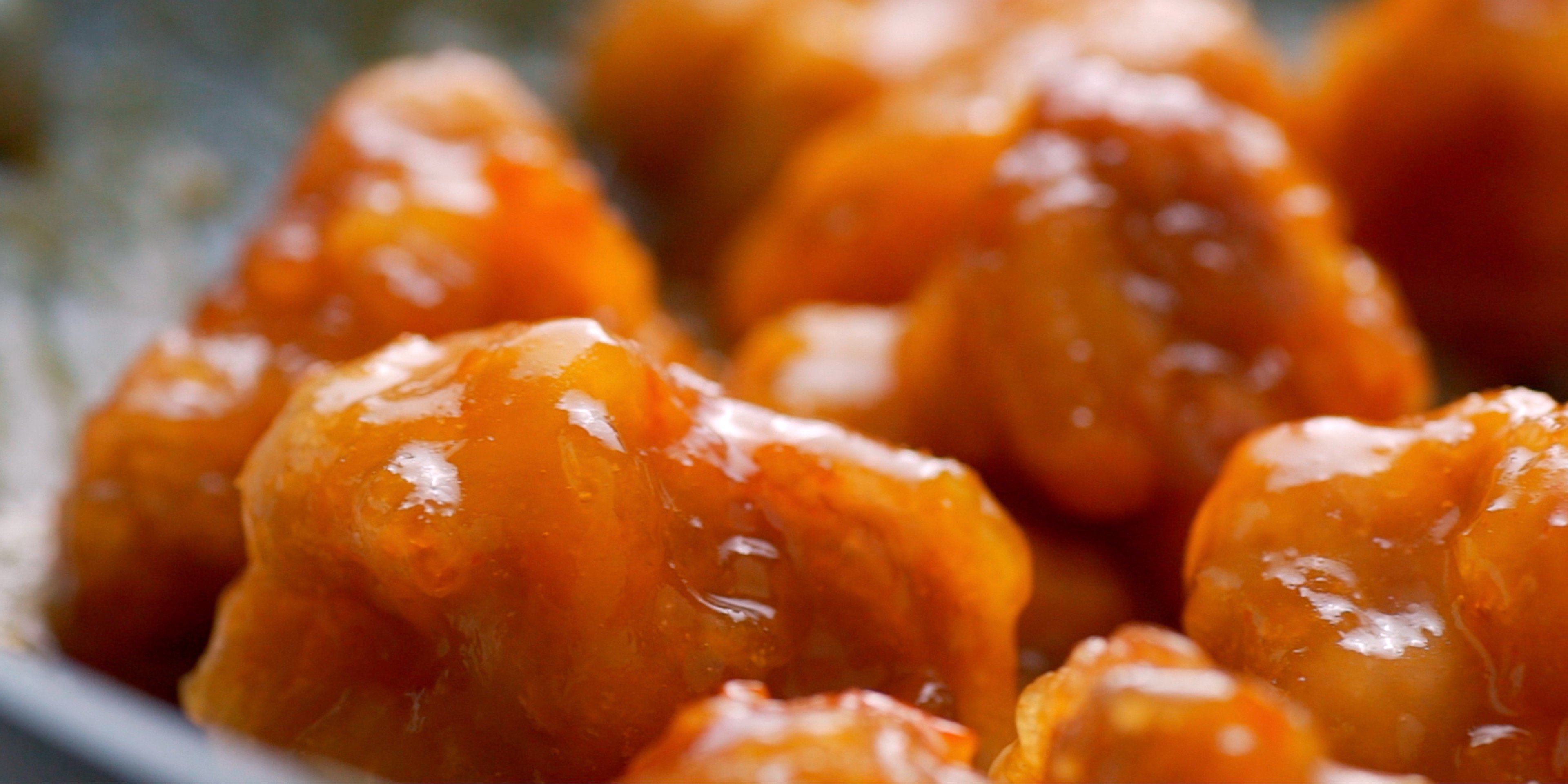 How do you make Orange Chicken?

For my take on Orange Chicken, I like to marinate the chicken in a combination of soy sauce, sake, and ginger. This not only seasons the chicken, imparting loads of umami, but it also gives it a pleasant ginger kick that complements the orange flavor in the sauce. I usually throw the chicken in the marinade in the morning, so that it’s well seasoned by the time I’m ready to make it for dinner. If you’re in a rush, you could get away with a marination time as short as fifteen minutes.

Next, I dust my marinated chicken in a thin coating of potato starch before frying it. This is essentially how I make my Karaage, so the fried chicken is pretty awesome on its own, and you may be tempted to snack on a few bites before throwing it into the sauce. I prefer this method as opposed to using a batter because it’s easier, and it creates a thin crust without becoming greasy and cloying. I know someone is going to ask, so I’ll address it now. You can substitute cornstarch for the potato starch, but it will not be the same. Cornstarch has smaller granules, which leads to a denser coating, and it also has a higher ratio of amylose to amylopectin which gives it an unpleasant texture as it cools. Bob’s Red Mill produces a potato starch that’s sold in most upscale grocery stores.

To finish the dish, the fried chicken just gets tossed with the orange sauce until it forms a glossy orange glaze around each morsel of juicy chicken. 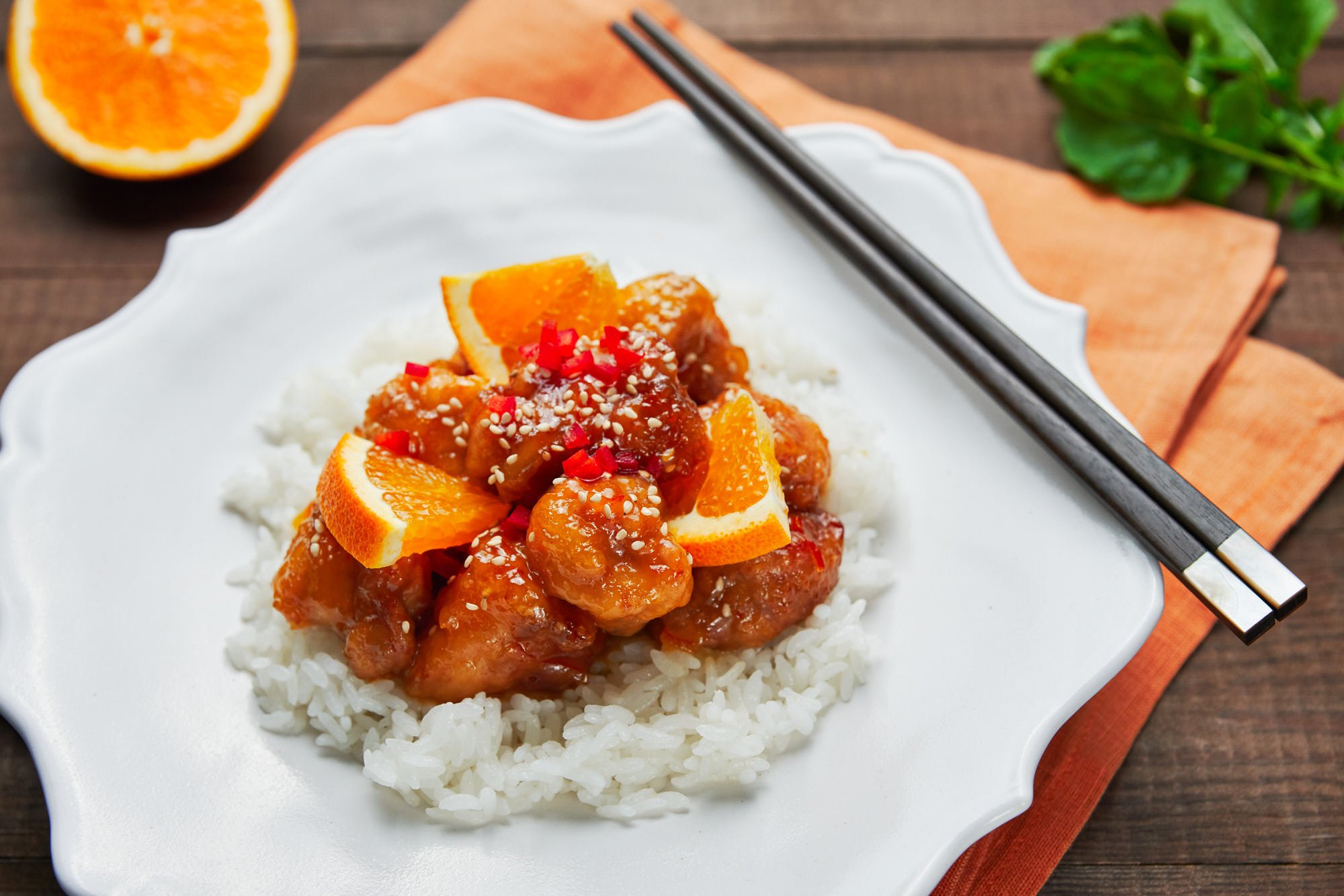 How do you make Orange Chicken Sauce?

For the sauce itself, I wanted there to be no mistake that it’s Orange Chicken you’re eating, so I hit it with a triple dose of orange. First, there’s marmalade, which is nice because it not only has an intense orange flavor, it’s sweet enough to balance out the tanginess of the second form of orange: orange juice. Finally, there’s some fresh orange zest, which adds a zingy pop of orange flavor without using any artificial flavorings.

For the marmalade, I like to use a cheap one because they tend to be sweeter and less bitter than the fancy ones. If you insist on getting fancy ingredients, put the money towards buying great chicken instead. As for the orange juice, you need to use a fresh orange anyway for the zest, and you should easily get 1/3 cup of juice from the orange you took the zest from.

What dishes go with Orange Chicken?

If you’re going to do a Chinese take-out night at home I usually like to make a batch of long grain white rice, along with some Chicken Chow Mein, Mongolian Beef, and a Green Bean Stir-Fry.