Boiling eggs may sound like the simplest thing you could possibly cook, but if you’ve ever boiled an egg you’ve probably run into problems at one time or another. The challenges with boiling an egg generally fall into two categories: cooking the egg and peeling the egg. Despite following a set of directions precisely you might have found your eggs under/overcooked, or perhaps when you tried to peel the egg it ended up looking like the surface of the moon.

The good news is that both of these problems are easily resolved with a little understanding of the science of eggs. Read on and you’ll be boiling perfect oval eggs whether you prefer them hard-boiled or soft in the center.

Setting Temperatures of Yolks and Albumen

The first thing you have to understand is that the egg yolk sets at a much lower temperature than the egg white (70 degrees C vs 80 degrees C). Since the heat source (boiling water) is outside the egg, the egg cooks from the outside in. In theory, this means that by the time yolk is set, the white has also reached its higher setting temperature.

The problem is that since the boiling water is significantly hotter than the setting temperature of the egg, it’s very easy to zoom past the desired temperature. Because the temperature is rising so fast, it’s difficult to pinpoint exactly when to stop the cooking to get the egg exactly how you like it. The problem with most boiled egg instructions is that they create a formula (put eggs in cold water, bring to boil, boil for X minutes) assuming you put the exact same size and temperature of egg into the same amount of water in the same pan on the same stove… Well, you get the idea.

How Do You Cook the Perfect Boiled Egg?

The best way to figure out what works for your setup is to boil a dozen eggs and start pulling the eggs out of the water in thirty-second increments after about 3 minutes. But who wants to waste that many eggs? Well, luckily I have a friend that farms eggs and I’ve been busy experimenting in my lab to come up with an (almost) foolproof method of boiling eggs.

Since the main problem with boiling an egg is the narrow window of time during which the egg is perfect, I asked myself how I could slow the cooking down to expand that window of perfection. I found my answer in the way I cook my chicken for chicken soup

This is how I adapted the technique for eggs. Put refrigerated eggs in a heavy bottomed pot and cover with cold tap water so they’re covered by about 1″ (2.5cm) of water. Bring the water to a full boil (100 degrees C) over high heat, and then remove the pot from the heat. Let the eggs cook the rest of the way using the residual heat in the water. As the temperature of the egg rises, the temperature of the water will fall, which will give you a much wider window when your egg is perfectly cooked.

Before I give you cooking times for the eggs though, you need to know that there are many other factors that will affect the cooking time of the egg and I’ve outlined some of the major ones below along with what I did in my kitchen.

With all that in mind, here are the cooking times for various types of boiled eggs. The times start after the water has come to a boil and you’ve turned off the heat.

What’s The Best Way to Peel an Egg?

If you do a search on google for “peel an egg” there are literally dozens of purported ways to make peeling an egg easy. Most of them don’t work with fresh eggs, and while aging an egg for 2 weeks works pretty well, who wants to wait that long to make a boiled egg?

The good news is, after some experimentation, I’ve come up with a method that works every time, no matter how fresh the egg is. The secret is to put a small crack in the bottom of the egg(the fat side) BEFORE you boil it. The crack needs to extend all the way through the hard shell, but it must not rupture the soft inner membrane (otherwise you’ll end up with egg white spewing out of the crack as it boils). I use a small curved object (like the end of a pestle or back of a spoon) to crack the egg on because it creates a more predictable circular crack rather than a linear crack that could spread and rupture the membrane.

So why does this work? To understand this, it would help to understand why older eggs are easier to peel than fresh eggs. Unfortunately, there is no scientific consensus on why an aged egg is easier to peel than a fresh egg. One thing we do know is that the albumen in a fresh egg contains more carbon dioxide, which means it has a lower pH (more acidic). This leads to one popular theory: that the acidity somehow makes the albumen adhere to the membrane more than an older egg with a higher pH.

As an egg ages, the moisture in the albumen seeps through the membrane and evaporates through small pores in the shell. This is what makes the air pocket inside an egg, and why it grows larger as the egg ages. Here’s where another theory comes into play: that the larger air pocket somehow makes the albumen adhere less to the membrane.

Personally, I don’t buy either one of these theories because they don’t fit with my observations. My theory is that the membrane absorbs more moisture as the egg gets older, keeping the albumen from sticking to the membrane, and thus making it easier to peel.

By putting a small crack in the shell, it allows water to enter the egg and saturate the membrane, mimicking the membrane of an older egg. If any scientists out there want to compare some cross sections of the albumen-membrane interface under a scanning electron microscope it would be awesome to finally put this mystery to rest.

Now that you’ve mastered the art of boiling eggs how you like them, how about becoming a becoming a poached egg pro, or a sunny-side up superstar? To help you along, I’ve put together a short digital cookbook where I walk you through my techniques for making the perfect egg every time! 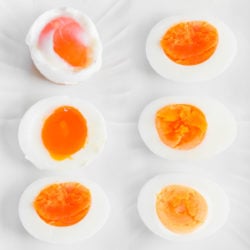 What do you think?253 Cancel reply