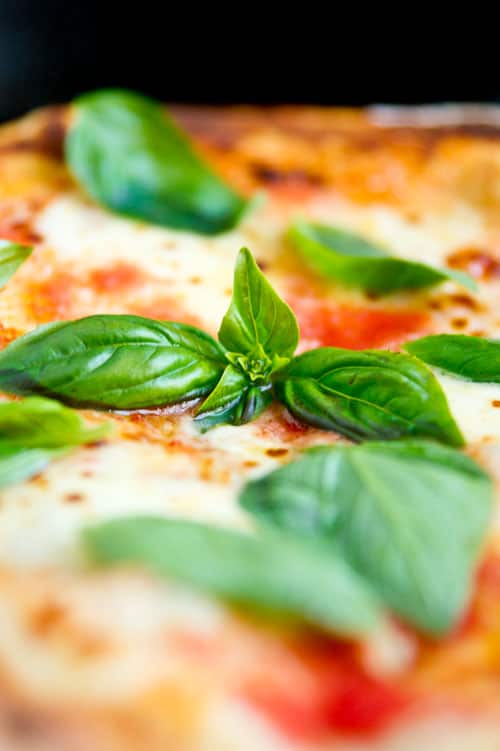 In preparing for the second challenge of Project Food Blog, I came across a line in the prompt that says “We’re bypassing the French and Italian standards in favor of more challenging cuisines.”. The problem is, I’m Japanese, so cooking an “exotic” Asian dish felt like it was cheating. That’s why I decided to make a dish that’s ubiquitous and utterly simple, and yet it’s something that is made wrong ninety-nine times out of a hundred. Yep, that’s right, I’m making a classic pizza.

Not Chicago deep-dish, or even a New York-style fold-in-half thin crust, and most certainly not some new-fangled California-style pizza with, ohh… say some blasphemous combo like kimchi and pork belly on it. Since I’ve never set foot in Naples, this meant hitting stacks of bound fiber inscribed with contrasting pigment. Yes my friends, this food blogger, walked over to a bookshelf and used a table of contents to research the history of a true Neapolitan pizza.

As it turns out, none of the ingredients in pizza comes from Italy. Tomatoes are from Peru by way of Spain, Basil from Southeast Asia by way of India, and flour is a product of Jarmo cultivation in Mesopotamia (modern day Iraq). This might be reaching a bit too far back in time, but I thought it illustrates an interesting point: that “fusion” cuisine is nothing new.

Back to the present, my goal was to make a proper Pizza Margherita. The type of pizza that Queen Consort, Margherita of Savoy may have had during her visit to Naples in 1889. That’s right; no canned tomato sauce, no boboli, and certainly no fancy kitchen gadgets like a stand mixer or food processor. I wanted to roll old-school, you know, cooking using your head, hands and heat.

If you’ve ever wondered why Pita and Pizza sound similar, wonder no more. Both flatbreads share a common history with the Greek word for pitch: πίσσα (písa). It’s no surprise that people in port cities near the Mediterranean figured out that you could put stuff on this flat bread. This included Naples, which is traditionally credited with the creation of the modern day pizza.

To get the characteristic snap on the exterior, with a soft pillowy interior, pizza needs to be cooked quickly at a very high temperature. Traditionally, wood-fired brick ovens are used, achieving temperatures as high as 900 degres F. In addition to cooking with radient heat, the bricks under the pizza are extremely hot, cooking the pizza from both above and below. The rapidly vaporizing steam creates big bubbles in the dough giving the pizza loft, and its characteristic ring of puffy crust.

Since I don’t have a brick pizza oven in my 550 square foot apartment, I knew I’d have to tap my right brain for ideas. This challenge reminded me of my dilema while making naan. I don’t have a clay tandoor in my kitchen, and yet I’m able to make lightly charred, soft, puffy naan at home using a very hot cast iron skillet. It seemed reasonable that I could achieve a similar result for my Pizza Margherita using the skillet. The problem is that unlike naan, pizza has toppings and cannot be flipped over to cook the other side. That’s where the broiler comes in. A minute or two spent a few inches from the broiler is enough to puff the crust like a blimp while melting the cheese into a hot bubbly mess.

I’ve adapted Jim Lahey’s no-knead dough using a little extra salt, and weight measures, which work better for this pizza. For the tomatoes, I wanted the fresh taste of raw tomatoes, but I didn’t want to puree it in a blender, so I steamed them first to make them easier to get through a strainer. Just make sure you use summer sweet vine ripened tomatoes, or the sauce will be a bland watery mess.

As with most pizzas of the time, Margherita pizzas are simple. Like tomatoes, basil, mozzarella, olive oil and salt simple. Yep, that’s all I put on it, and it was delicious.

What do you think?59 Cancel reply