Niku(肉) means “meat” in Japanese, and jaga is short for jagaimo(ジャガイモ) which means “potatoes”. Put the two together, and you have yourself a Japanese stew featuring meat and potatoes! Despite the uninspired name, the dish itself is a brilliant remix of traditional western stew ingredients prepared in a Japanese way.
It’s flavorful and delicious, and yet it’s hearty enough to feed the troops… quite literally. Like Japanese curry rice Nikujaga was created by cooks in the Japanese Imperial Navy to feed a lot of hungry mouths. Despite its less than savory origins, it’s gone on to become a household staple, particularly for families with growing kids.

Instead of including big chunks of meat, the beef in this stew is sliced thinly. This was probably done initially to cut back on the cost of the stew, but it works great for this dish, as the meat cooks to a fall-apart consistency in far less time than a traditional stew. Also, because the meat gets better dispersed, it also means that you get a bite of beef with every mouthful of Nikujaga. 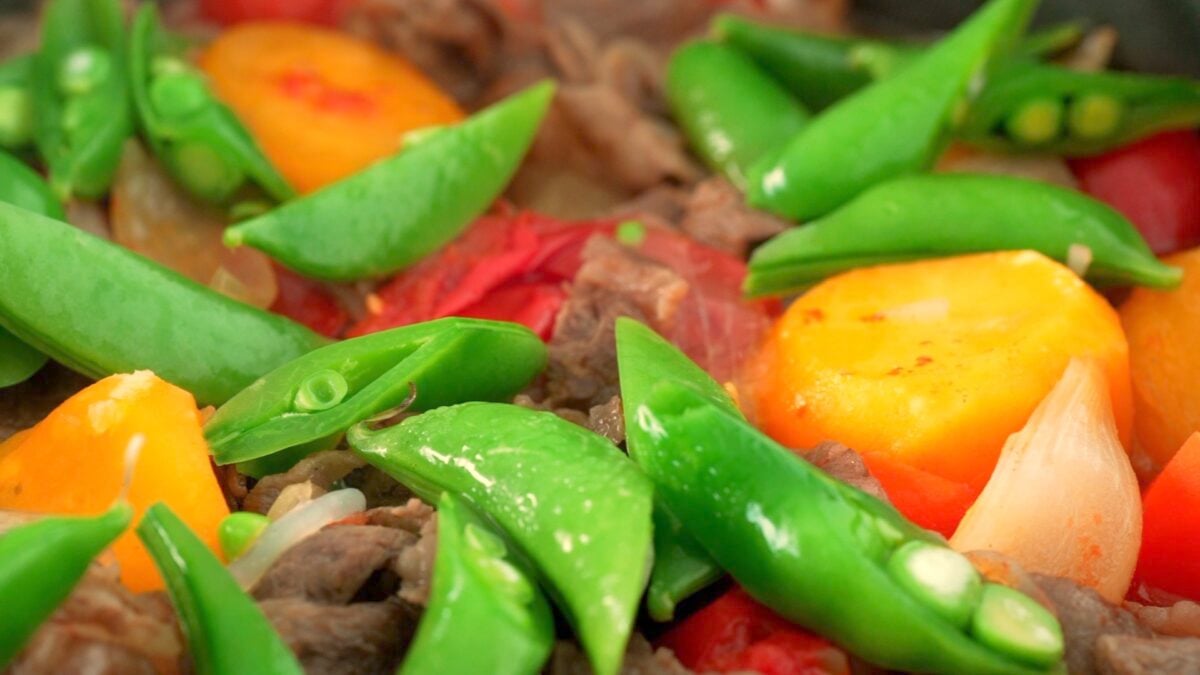 There are no hard-and-fast rules here, and this is a fun dish to experiment with, but here are some guidelines to get you headed in the right direction.

The most common type of meat used for Nikujaga is beef, but I’ve also seen it done with pork. The meat is almost always thinly sliced which helps it cook faster while releasing its flavors to intermingle with the other ingredients. Whichever you decide to go with, be sure to select a cheaper cut that’s not too lean; otherwise the meat will end up dried out. For beef, I like using short rib or chuck and if it’s pork I’ll go with pork belly or shoulder.

As for other proteins, the term “niku” refers to red meat, so it’s technically not nikujaga if you make this with another protein such as chicken(torijaga) or tofu(tofujaga). That being said, this recipe works beautifully with either of the above. For chicken, I’d use thigh meat cut into bigger chunks, and if you’re using a plant-based protein, you’ll probably want to increase the amount of soy sauce or add a little salt. 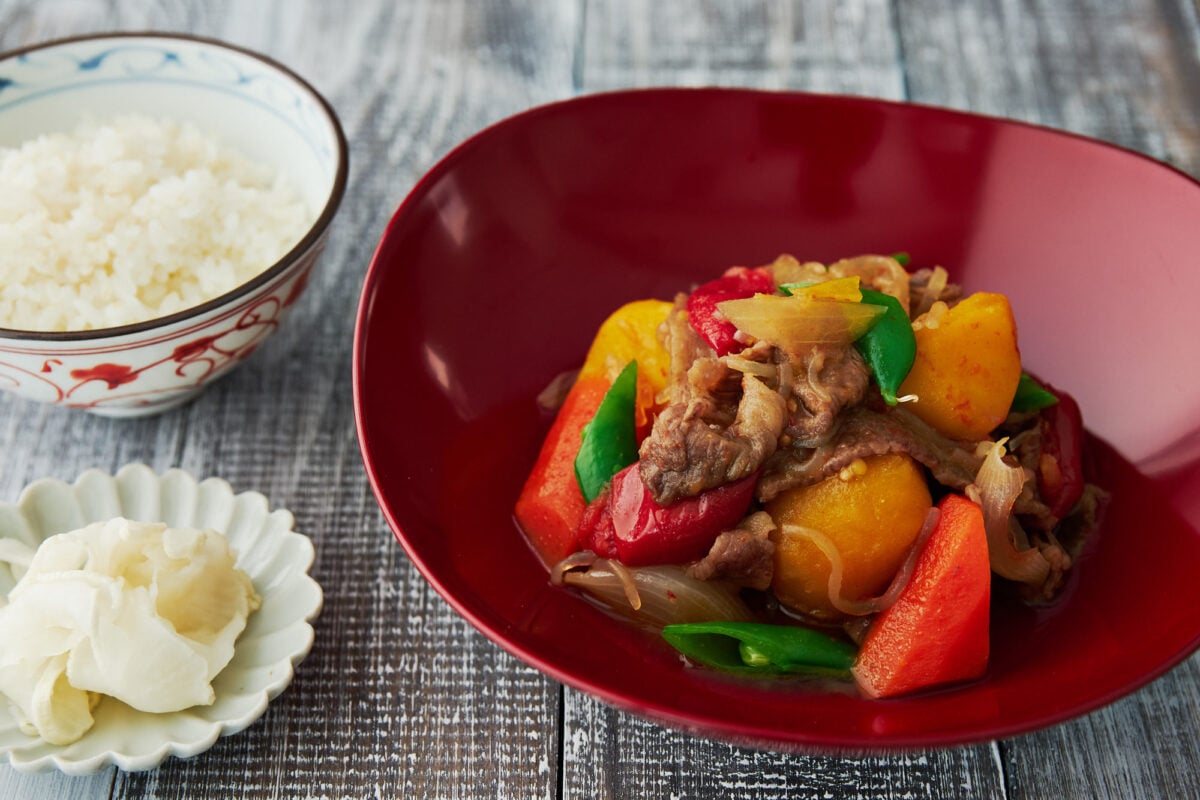 As the name implies, potatoes are an integral part of this dish, and while any potato will do, I like using new potatoes (i.e., freshly dug potatoes), which tend to be creamier than the ones that have been cured. It’s purely cosmetic, but I like to bevel the edges of the potatoes (check out the video for how to do it), because gives them a nicer shape, and helps keep them from crumbling as they cook.

The other vegetables that get stewed with the meat and potatoes are onions, carrots, and tomatoes, and I like cutting all of these on the large side. More on the addition of tomatoes later…

Shirataki noodles aren’t technically a veggie, but they’re a great zero-carb zero-calorie way to add some more substance to the stew, More importantly, the noodles have the ability to suck up all the flavor of the broth without going mushy, which is why I love adding them to my Nikujaga. Just be sure you chop them up a bit so you don’t end up with a tangled mess on your hands.

Finally, I like to add something green in the end. Usually, this means snap peas, but snow peas, green beans, and broccoli are all legit alternatives.

Nikujaga is traditionally cooked in dashi seasoned with soy sauce, sugar and sake. In that sense, it’s quite similar to a traditional Nimono. For my version, I’ve cut out the dashi in favor of cooking this with tomatoes. This substitution not only cuts back on effort, but I also like what it does to the flavor profile of the dish. The tomatoes release a lot of liquid, and together with the soy sauce and sake, they produce plenty of lip-smacking umami. I also like the fact that the tomatoes add a natural sweetness and balancing tang to the stew. Finally, the use of tomatoes instead of dashi makes it fairly easy to make this vegan by swapping out the meat for a plant-based protein.

If you want a more traditional version, check out my original nikujaga recipe here. 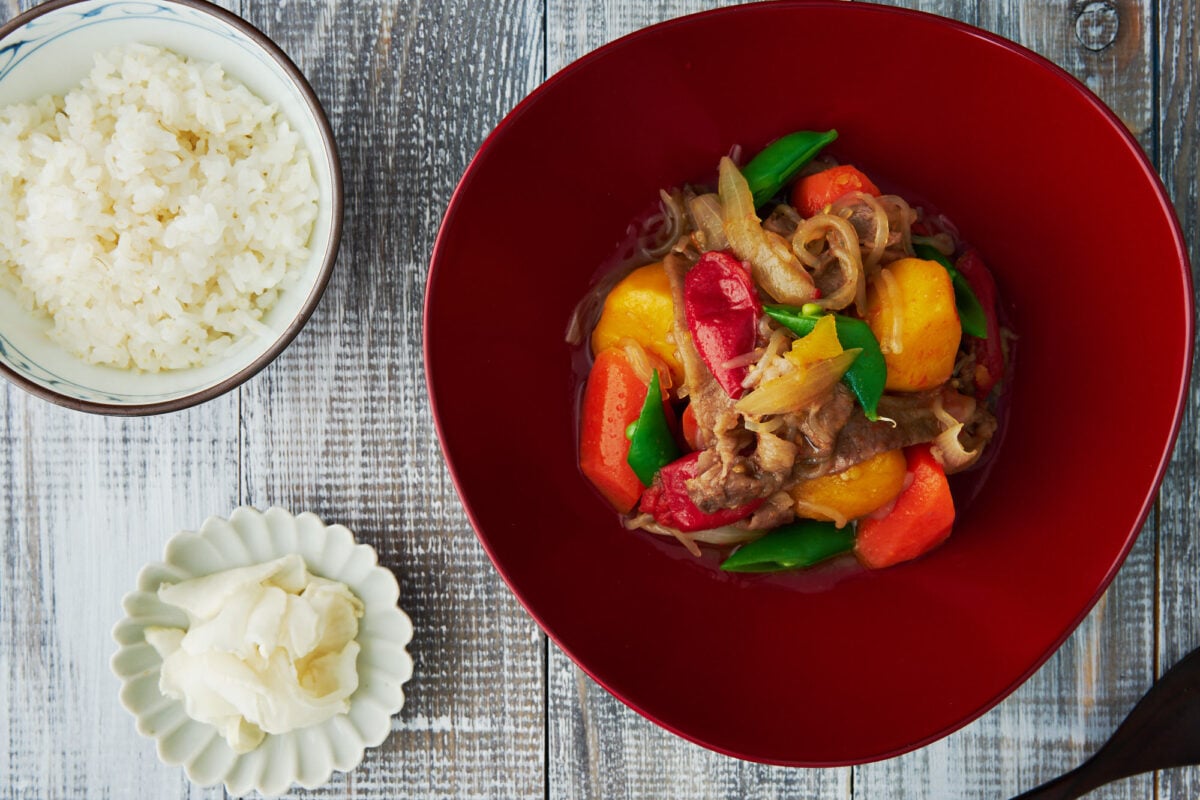 How to Make Nikujaga

Depending on how large you cut the veggies, Nikujaga can take up to an hour to cook. That’s still considerably less than a Western beef stew, but it’s too long to make the roster on a weeknight. To address this shortcoming, I’ve come up with a shortcut that cuts the cooking time by more than half, putting this well within reach as a weeknight option. The trick is to give the potatoes and carrots a head start by microwaving them for a bit. Since everything else cooks fairly quickly, this reduces the simmering time to 20 minutes.

I’ve also cut back on the amount of effort involved by cooking this in layers with a drop lid. All you have to do is bring the sake, soy sauce and sugar to a boil, and then layer in the potatoes, carrots, meat, onions, tomatoes, and shirataki. Cover that with a lid and stir it once in the middle, and by the time your rice is cooked, the Nikujaga will be perfect! 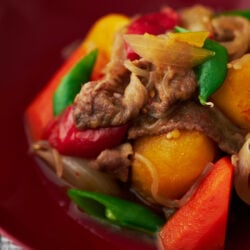 If you enjoyed watching this, please let me know by heading to my YouTube Channel and giving this a like👍🏽, Subscribing to my channel, and leaving a comment to let me know what else you’d like me to make a video for. These videos take a ton of time to produce and hearing from you guys is the best motivation to keep me going!