Cheap yet satisfying, Korokke is both literally and figuratively a meat and potatoes dish that’s long been a staple of Japanese home cooking. Growing up, my mom used to make her version of these potato croquettes with ground beef, onions, and canned corn, and the smell of the meat and onions always drew me out of my room to give the filling a taste.

You can read more about the history of Korokke in the FAQ below, but in short, the dish evolved from European Croquettes substituting mashed potatoes for bechamel because dairy products weren’t widely available in Japan at the time of the dish’s introduction in the late 19th century. These days, Korokke ranks up along with tonkatsu and curry rice in terms of Japan’s most popular Western-style dishes.

I’ve used a few culinary techniques I’ve learned over my years in the kitchen to make the filling velvety smooth and creamy with enough flavor to be eaten with a side of rice or stuffed into a roll to make a Korokke Sando.

How to Make Korokke (Potato Croquette)

The first thing you need to do is boil potatoes whole. Make sure you scrub them well to remove any dirt, and add them to a pot before covering them with a few inches of water. Next, cover the pot with a lid and bring the water to a boil. Once it’s boiling, you can remove the lid and turn down the heat to maintain a gentle simmer; this keeps them from falling apart. Depending on the size of the spuds, they may take anywhere from thirty to forty minutes to cook through.

For the pork, you want to mince it up by hand. I usually slice the block into 1/8-inch thick slices and then cut the pieces into 1/8-inch wide strips. Then you can turn the strips 90° and cut them into small cubes. Mix the oyster sauce into the pork to season it.

To make the gravy, add the potato starch, chicken stock, salt, and white pepper to a bowl, and use a Microplane to grate in about 1/8 of a teaspoon of nutmeg. Ground nutmeg will work, but I find the fragrance is always better when it’s freshly grated. Whisk the ingredients together until the starch has evenly dispersed

When the potatoes are done, remove them from the water and mash them. I usually just toss them into the hopper of a potato ricer. This makes it easy because you don’t need to peel them first, and it does a great job of mashing them smoothly. If you don’t have one, you can wait for them to cool enough to handle and peel them before using a potato masher or fork to mash them up.

To make the filling, saute the onions in a tablespoon of oil for about four minutes or until they start to brown. Add the minced pork and continue sauteing until the meat starts to brown around the edges (another 4-5 minutes). Stir the gravy mixture again and pour it into the pan. It will thicken into a paste quickly, so mix it into the pork and onions as fast as possible.

To fry the potato croquettes, heat 2-inches of vegetable oil in a high-sided pot to 320°F (160°C) and line a wire rack with a few sheets of paper towels.

Divide the rested potato mixture into eight to twelve equally sized blocks using a pastry knife. Then you want to shape each block into a round or oval patty that’s no thicker than one inch. Next, slap the patties back and forth between your hands to get rid of any air pockets or cracks in the Korokke, which can cause them to burst when you fry them.

To bread the Korokke, prepare a bowl of flour, a bowl with a beaten egg, and a tray or shallow bowl with the panko breadcrumbs.

The first thing you want to do is dust all of the patties with a thin, even layer of flour.

Next, you want to coat one patty with an even layer of egg with one hand. Then you can transfer it to the panko and switch hands to cover it with the breadcrumbs. I usually like to scoop panko onto the patty and use a gentle squeezing and patting motion to ensure you have good adhesion of the panko with the patty. Repeat these steps for the rest of the potato patties.

Once the oil is up to temperature, carefully lower the Korokke into the oil and deep fry them in batches until they’re golden brown and crisp (about 6 minutes). Be sure to flip them over periodically so that they brown evenly.

Drain the potato croquettes well as you take them out of the oil and then transfer them onto the prepared cooling rack to continue draining.

Korokke (コロッケ) is the Japanese transliteration of the French word Croquette. It refers to a class of yōshoku (Western-style food) dishes made by breading and deep frying a starch-based dumpling. When Croquettes were first introduced to Japan in the 1870s, dairy products such as milk and butter were not widely available, so mashed potatoes were substituted for the bechamel filling traditionally used in European versions of the dish.

The first written reference I could find for these Japanese potato croquettes was in a book published around 1888 called “Simple Cooking Methods of Western Cuisine” (軽便西洋料理法指南 – Keiben Seiyō Ryōri-hō Shinan). You can see the title page and recipe below.


According to this book, there were two ways of preparing Korokke at the time. One method uses a mix of minced meat that’s breaded and fried like what is now known as menchikatsu. The other method is a potato croquette filled with mashed potatoes, onions, and minced meat.

Nowadays, there is a wide variety of Korokke, but the two major categories are potato croquettes known simply as “Korokke” and bechamel-based croquettes, known as “cream Korokke.” 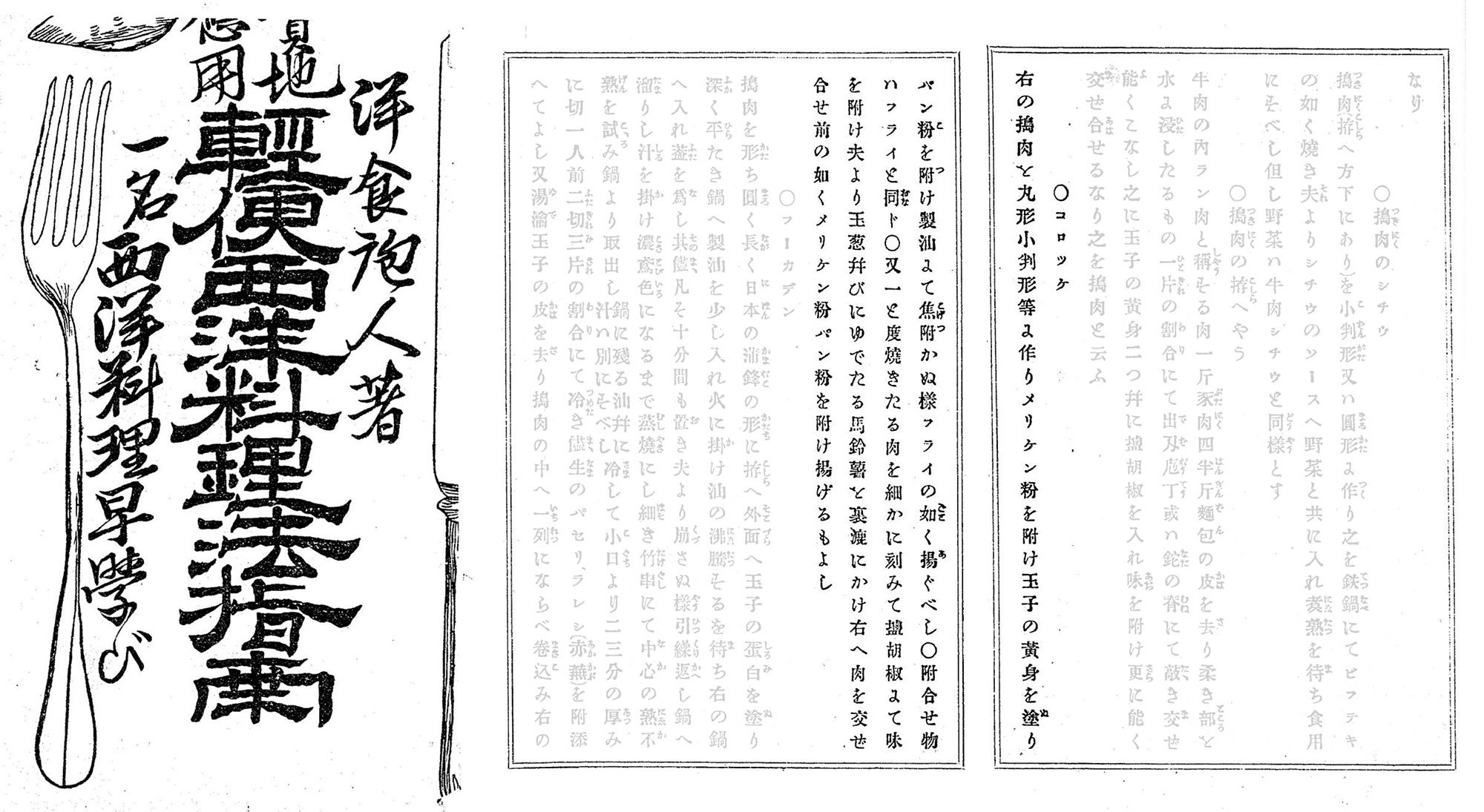 How do you pronounce Korokke?

Korokke is a 3-syllable name pronounced as follows (read the italicized parts).

ko like corner
ro the “ro” sound does not exist in the English language, and the best way to make it is to say the word “roll” with the tip of your tongue at the front of your mouth.
‘ The ッ in Korokke is a glottal stop, which means there is an unvoiced portion of the word where you pause for a beat.
ke like kept

This recipe is not vegan; however, it can easily be converted into a vegan and vegetarian friendly Korokke by substituting minced mushrooms for the pork shoulder and vegetable stock for the chicken stock. You’ll also need to find a plant-based oyster sauce or substitute 2 teaspoons of soy sauce + 1 teaspoon of sugar.

Can you prepare Korokke in advance?

I recommend preparing the filling the day before you plan to eat the Korokke. If you want to make them further in advance, you can prepare the filling, shape, and bread them. These can then be frozen on a sheet pan. Once fully frozen, they can be packed in a container and stored in the freezer for up to a month. If you plan on freezing them, I recommend making 12 smaller Korokke so that they heat up properly when you fry them. One final possibility is to prepare the Korokke all the way through the frying step. These will keep for a few days in the refrigerator and while they won’t be quite as nice as a freshly fried batch, they can be reheated in the oven to crisp.

What kind of sauce do you serve with Korokke?

This Korokke recipe has enough seasoning and flavor to be served without a sauce, but it goes well with any sweet and tangy sauce, such as chunou sauce, tonkatsu sauce, or okonomiyaki sauce. It’s also nice with something tangier like Worcestershire sauce or simply a squeeze of lemon. 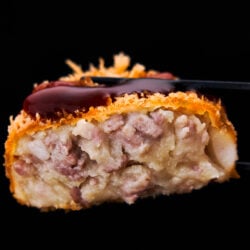