Ramen Carbonara is a quick meal I’ve been making for myself since before ramen hacks were a thing. The idea is to use quick-cooking ramen and toss it together with a carbonara sauce made from egg yolks, cheese, and black pepper. Since I first posted about it, Ramen Carbonara seems to have taken on a life of its own, and I wanted to revisit the concept with a new recipe that’s even simpler.

How to Make Ramen Carbonara

The first thing you want to do is add the ramen, water, and chopped bacon to a pot that’s just large enough to fit the brick of noodles. If your pot is too big, the water won’t cover the noodles, and it will evaporate before your noodles are cooked. Put the pot on the stove and bring the water to a boil.

Once the water is at a full boil, flip the brick of ramen over a few times until it starts to fall apart. Then you want to stir the noodles until there are no clumps of noodles remaining.

Set a timer for 2 minutes and turn off the heat. You’ll want to stir the noodles once or twice during that time to make sure they’re absorbing the water evenly.

While you’re waiting for the noodles to finish cooking, add the egg yolk, cheese, and a few cracks of black pepper to a bowl and whisk this together until it forms a smooth sauce.

When your noodles are cooked, dump the noodles and any remaining starchy water into the egg yolk mixture and quickly stir everything together until you have a thick sauce coating the noodles.

Plate the noodles and dust the top with more parmesan cheese and black pepper. Garnish with some scallion greens and serve immediately.

What is Ramen Carbonara?

Ramen Carbonara is a hack that uses instant ramen noodles in place of Italian pasta. The main advantage is that it comes together in about a third of the time of a more traditional Pasta alla Carbonara due to the faster cooking noodles. Guanciale is replaced with bacon (which is more widely available), and Pecorino Romano is replaced with pre-grated parmesan cheese to save time.

Would it be better to fry the bacon?

You will undoubtedly get more flavor from the bacon by browning it first in a frying pan, this adds another step and requires another pan. Also, by boiling the bacon with the noodles, the flavor of the bacon permeates the noodles.

What brands of instant noodles work for this?

This recipe should work with almost any brand of instant noodles that include flash-fried noodles. Flash-fried noodles usually come in a brick with curly noodles, which tend to be light in color and opaque. Some brands that should work include Sapporo Ichiban, Top Ramen, Maruchan, and Indo Mie. Some brands have thicker or thinner noodles that the ones I used, so you may need to make minor adjustments in the amount of time they rest for after you take the pot off the heat.

I’ve been making versions of this dish since having a craving for carbonara after a night of drinking in the mid 2000’s. I first posted a recipe for it in 2015 on this blog as a collaboration with Nissin Food’s Raoh brand of ramen and then reimagined it as a Japanese dish for PBS in 2017. I’m sure someone probably thought of this idea before I did, but I couldn’t find any credible reference that predated my discovery. In any case, I created mine independently, so I’ll take credit for it until someone proves otherwise. 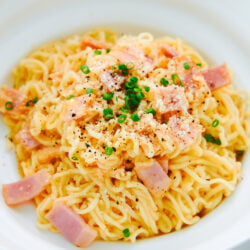