Growing up, a steaming bowl of ramen was my panacea to mend a cold, the balm demanded to sooth my angst, and the pick-me-up needed after a rough day at school. Those perfect bowls of creamy porcine soup brimming with curly noodles were, for me, the quintessential comfort food. This is probably why I took it with such great offense when hipster New York ramen joints started offering meatless abominations on their menus.

To me, a ramen broth made without bones, cartilage and fat was not ramen at all, but some impotent hack undeserving of the title “ramen”. My thinking at the time was that since chicken noodle soup without chicken would just be a vegetable noodle soup, who gave these plant-wielding cretans permission to call their soulless creations ramen?

Well, I’m here today to apologize for being an elitist douchebag and for being wrong. Perhaps it’s my Kyushu roots, where “ramen” is synonymous with tonkotsu (pork bone) broth, or the fact that I’ve seen far too many misrepresentations paraded around as Japanese food, but what I failed to realize is that the essence of ramen isn’t about meat, bones and fat, it’s about the intense umami, richness and aroma that comes from them.

In my defense, most attempts at vegan ramen I’ve seen to date have been vapid bowls of vaguely Asian noodle soup, but after realizing my error, I figured the only way to make up for my sins was to make a better plant-based ramen.

So how do you create a rich broth laden with umami without using meat? Well… it’s not as hard as you might think and it’s actually a good deal faster than simmering a pot of bones for hours

The first challenge is to create a rich milky soup to mimic the sort of broth you’d get from the breakdown of collagen and fat. The keyword here is “milky” because while you can spend hours boiling cartilage and fat to create an emulsion, there’s a more direct route by adding milk… in this case, soy milk. I know, it sounds crazy, but trust me it works

While soy milk will give us the rich creamy texture, it’s woefully devoid of the kinds of flavors we want in a really great ramen. Building a concentrated vegetable and mushroom stock will get us the umami and may even give us the hint of porky funk that we need, but the problem is that the soy milk will attenuate the flavor and umami in the stock, while the stock will water down the richness of the soy milk…. a lose-lose proposition.

My solution is to use a 100% soy milk for the stock, and then make a concentrated taré (sauce) that can be used to add all the other flavors and tastes. Rather than spend the time to make a vegetable stock and then reduce it, I decided to start with concentrates. Namely amino acid rich liquids such as soy sauce and sake, along with amino acid rich dried foods like vegetables, kelp and mushrooms.

By powderizing the dried ingredients and reducing them with the liquids, you end up with an ultra-concentrated sauce that packs a stunning amount of umami into just a fraction of a drop. Combined with the soy milk, you’ll have a broth that will have even the most jaded ramen critics scratching their heads in disbelief that there’s no meat, dairy, fish or MSG in it.

Lastly to capture the savory sweet aromas of the caramelized aromatics in a great tonkotsu broth, I opted for an oil infused with burnt garlic, ginger, and scallions. I know I probably lost a few of you at soymilk, and a few more of you have your mouse pointers hovering over the “x” on your browser, but hear me out. Thanks to the Maillard reaction, the more you caramelize aromatics, the more complex the flavors become. At some point though, as the sugars turn to carbon, the mixture will become bitter. This is a bad thing if all you’re eating are the aromatics, but with ramen, that’s not the case. The burnt oil is just a small fraction of the liquid and the creamy broth paves over any bitterness in the oil, allowing the fully realized potential of the aromatics to shine through. If you’re still not convinced, consider this: Mayu (burnt garlic oil) is a legitimate topping in Kagoshima-style ramen, and it’s the charred aromatics that give a great pho its characteristic flavor.

So how does this vegan tonkotsu ramen taste? Unctuous, with a lip coating stickiness that helps the blast of umami linger on your tongue as you contemplate its deliciousness. Put simply, it’s nothing short of miraculous, and it’s proof positive that even the meatiest of dishes can be made from plants. Mind you, it’s not going to taste exactly like a pork-based tonkotsu ramen since it doesn’t actually have pork in it. But does it capture the spirit and essence of ramen? Absolutely!

Perhaps the most compelling reason that should get non-vegans excited about making this plant-based alternative is the fact that this ramen can be put together in about 45 minutes. I’d like to see someone pull that off with a bag of bones. 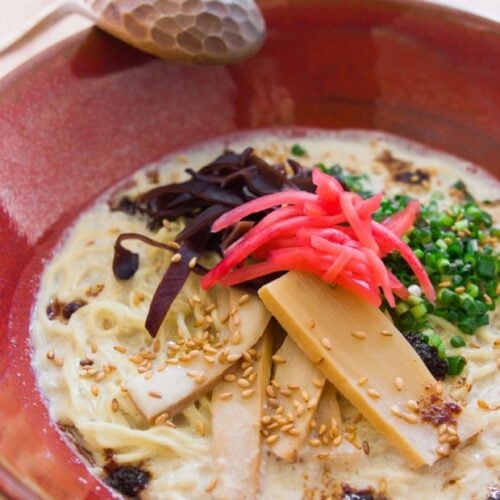 Nerigoma is made by grinding whole toasted sesame seed into a butter. Tahini is made by removing the hulls from unroasted sesame seeds and then grinding into a butter. They are similar but not the same. I recommend looking for nerigoma at a Japanese grocery store, but if you can't find it, use Al Wadi brand Tahini (do not use Joyva brand, it will make you ramen taste off).
Course Entree, Soups & Stews
Cuisine Japanese
Diet Dairy-Free, Low Sugar, Pescatarian, Vegan, Vegetarian

What do you think?48 Cancel reply