Tebasaki(手羽先) literally translates to “wingtips” and refers to the cut of chicken as well as a specific dish that’s made with them. The dish hails from Nagoya and is made by glazing crisp fried wings in a sweet and savory sauce.

Unlike the other Japanese fried chicken, Tebasaki is always made with bone-in chicken wings, has no breading, and is seasoned after it’s fried. Despite the absence of any significant crust, the wings end up rice cracker crisp thanks to a double-dip into the fryer. Think of these as the Japanese cousin of Buffalo wings, and Korean fried chicken.

How do you get chicken wings crispy?

Getting something crispy without batter or breading and keeping them crispy after a dunk in a sauce is no easy feat, but there are a few techniques you can use to get restaurant-quality results without a commercial fryer. If you’ve ever worked on making crispy french fries, you already know a few of the tricks to make chicken wings crispy.

The thing that you’ve got going for you is that chicken wings are covered in skin, which is mostly fat and collagen. As the chicken fries, the fat renders out, and the collagen puffs up and crisps. This is how cracklins are made from pig skin. But before any of this magic can happen, you need to get rid of the water in the surface of the chicken.

There are a couple of steps to achieve this, and it starts by salting the chicken and letting it rest. This causes any excess moisture to leech out of the skin, thanks to osmosis. The next thing you want to do is to use paper towels to thoroughly dry the surface of the wings, before frying them.

Then, you want to double fry the chicken. The first fry is done at a lower temperature for a longer period of time, which allows the moisture to evenly escape from the chicken. Then, the wings are removed from the oil and left to rest while the temperature of the oil is raised. While the chicken rests, the moisture remaining in the center of the chicken spreads out into the crisp outer layers until it eventually reaches equilibrium. Then, when you fry it again at a higher temperature, you’re able to quickly vaporize that moisture, which puffs up the skin for a lasting crispness. 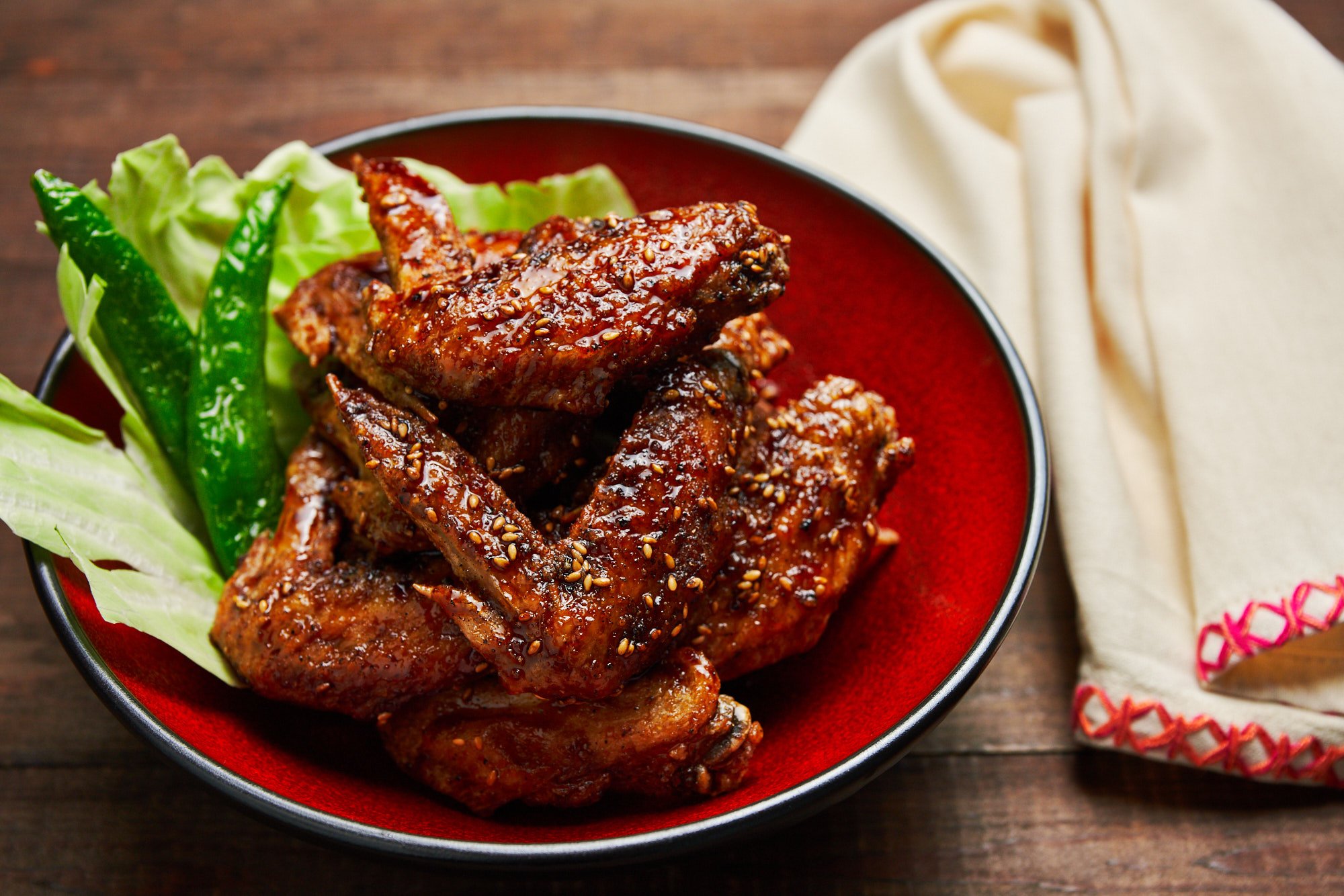 What goes into Tebasaki sauce?

The sweet and savory glaze used to coat tebasaki makes for a delicious condiment. The base is similar to teriyaki sauce, but it’s flavored-up with ginger and garlic and boiled until it’s nice and thick. Then, a splash of black vinegar gets thrown in at the very end to add just a hint of balancing tartness that keeps the sweetness in check. While it doesn’t go directly into the sauce, I love adding loads of black pepper as I toss the chicken in the sauce, which not only gives it a spicy kick, it also adds a marvelous fragrance.

How do you get the sauce to stick to chicken wings?

By coating the chicken wings in a very thin layer of potato starch, it gives the sauce something to cling to without creating a noticeable crust that can get in the way of the skin.

How do you sauce chicken wings without making the skin soggy?

The trick is to dunk the wings in the glaze as they come out of the hot oil. This does two things. The first is that there’s still hot steam escaping from the chicken, preventing too much glaze from seeping into the crust and making it soggy. The second is that the hot wing caramelizes some of the sauce around the chicken, giving it a ton of flavor without soaking up much moisture from the sauce.

Can Tebasaki be made in advance?

If you don’t pile the wings too high, these wings will retain their crispness for at least half an hour, but nothing beats the crispness of the wings hot out of the fryer. That’s why if I’m serving these at a party, I’ll do the first fry ahead of time, and then do the second fry just before I serve them.

That being said, these are still very good at room temperature, or even cold out of the fridge, which makes leftovers a wonderful addition to a bento box lunch. 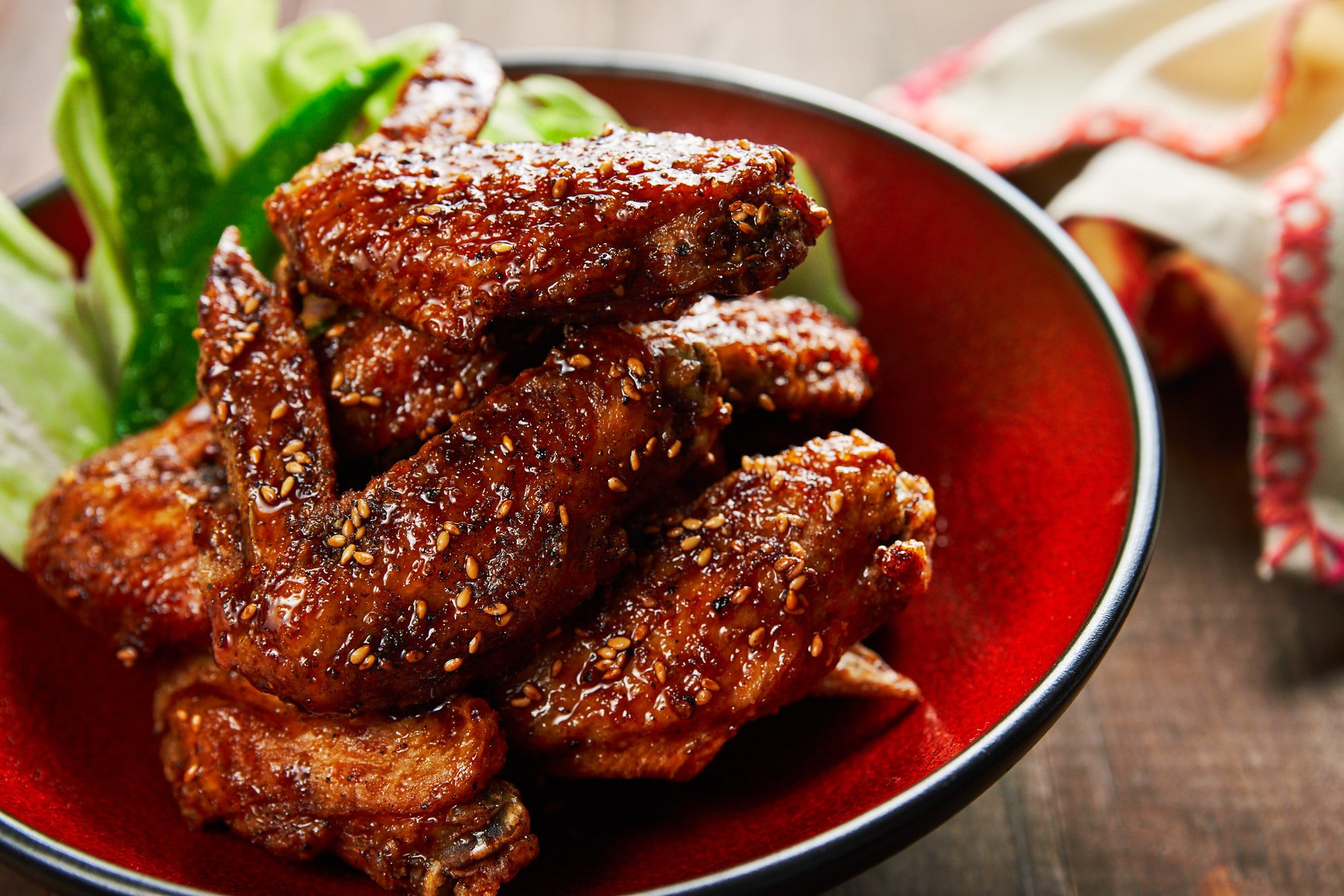 What do you serve with Tebasaki?

Beer! Seriously, beer and tebasaki are such a good match; it might even turn a beer hater into a beer lover. Other than that, you often see tebasaki served with tender cabbage leaves, but other veggies like cucumbers or celery sticks should go great with them. You can also experiment with topping the tebasaki with things like shichimi togarashi or sansho pepper for a little variation. 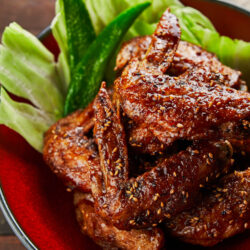 What do you think?42 Cancel reply