Lately, I’ve been seeing a lot of recipes claiming to be “authentic” chicken teriyaki yet many of them seem to miss the whole point of the dish. So here it is, the definitive chicken teriyaki recipe written by a Japanese guy.

What is Chicken Teriyaki

This may sound like an obvious question, but to understand what Teriyaki chicken (照り焼きチキン) is about, it helps to know what the name means. Teri (照り) is Japanese for shiny or lustrous while yaki means grilled or griddled (I’ll explain more about this later). Translated literally, the name means “shiny grilled chicken”, and it refers to the clear lacquer-like glaze that’s created when the sugars in the teriyaki sauce caramelize.

Although the name “Teriyaki” is relatively recent nomenclature, the practice of cooking meat and fish in a mixture of soy sauce and sugar has a long history going back hundreds of years. Historical names for teriyaki include: Amakarayaki (甘辛焼き, sweet and salty grilled) Kannroni (甘露煮, literally simmered in sweet nectar), and Yamatoni (大和煮, simmered Yamato-style).

I know there are probably a few of you asking “What about mirin?”. Mirin is a sweet alcoholic beverage made in a similar fashion to sake and then aged. It’s traditionally added to teriyaki sauce to boost the umami and shine in the sauce. The problem is that real mirin is hard to find, even in Japan. Most “mirin” is just grain alcohol with corn syrup, colorings, and flavorings. That’s why I prefer making the sauce with real brewed sake and sugar.

Don’t use these in Teriyaki Sauce

Most teriyaki sauce recipes include a lot more than 3 ingredients. Here are a few examples and why I don’t recommend using them.

I usually mix the ingredients for the sauce straight into the pan, but if you want to save even more time, you can premix a large quantity of soy sauce, sugar, and sake in equal parts and stir it until the sugar is dissolved (heat it if need be). Then you can put your homemade teriyaki sauce in a glass bottle and store it in the fridge where it will keep for months.

Cut of Chicken for Teriyaki

The traditional cut of chicken for teriyaki is boneless skin-on chicken legs (both the thigh and the drumstick). If you can’t find whole legs where you are, skin-on chicken thighs will work just fine.

When made properly, the fat renders out and the skin crisps, while keeping the meat tender and moist. If you really hate having skin on your chicken, you can remove it after you’ve browned the chicken, but before you add the sauce.

As for chicken breasts, it’s worth mentioning that teriyaki chicken is not traditionally made with white meat. That being said, if you prefer it, then there’s nothing wrong with using it. Just be aware that breast meat is much leaner than thigh meat, which makes it susceptible to drying out. My recommendation would be to pan-fry it until it’s just barely cooked through and then transfer it to a plate while you caramelize the sauce. Once the sauce is nice and thick, you can add the breast back in to glaze it.

How to Make Chicken Teriyaki

To get the most flavor into your teriyaki chicken, it’s important to get it nice and brown on the outside. In order to do this, you have to get rid of the moisture on the surface of the chicken before it will brown. Normally this would involve frying the chicken until the surface moisture has evaporated, but doing this will render the meat overcooked and dry. To get around this, I like to lightly salt the chicken, before pan-frying it. This coaxes out any excess moisture from the surface, and then you can use paper towels to remove the liquid, along with the salt before frying it.

Yaki is usually translated as “grilled”, but it can also mean pan-fried (like on a griddle). I prefer making teriyaki in a pan as it gives more consistent results and is less work than grilling. The method is simple; once the chicken is salted and patted dry, it’s placed skin-side down into a cold non-stick pan. There’s no need to add any oil since the skin will render out plenty of fat. The chicken is cooked slowly over medium heat until the skin side is crisp and browned. Then it’s flipped over to cook the meat through. Once the meat is cooked, you just need to drain off the fat and wipe out the pan before adding the ingredients for the sauce. Then the chicken is flipped over repeatedly to build up a nice shiny glaze. By the time it’s done, most of the sauce should be on the chicken, and anything remaining in the pan should be about the thickness of honey.

If you do decide to grill your teriyaki chicken, here are a few tips. Combine the ingredients for the teriyaki sauce in a small pan and boil until thick and bubbly. For the chicken, follow the salting step and pat the chicken dry. Brush some neutral oil onto the chicken; this will help prevent the chicken from sticking to the grill. Grill the chicken until it’s almost completely cooked through and then brush the reduced teriyaki glaze on the chicken. You can flip the chicken over and reglaze a few times to get a beautiful glossy finish.

As you may have guessed, you can use this teriyaki sauce recipe and method to make anything from beef teriyaki to salmon teriyaki. You’ll need to adjust cooking times depending on the type and thickness of the protein you choose. Just cook it until it’s a little shy of your desired doneness. Then you just add the ingredients for the sauce and caramelize them around the food, flipping it until it’s glazed in a shiny layer of sauce. 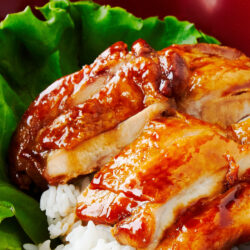 What do you think?69 Cancel reply