Since posting my recipe for Tonkotsu ramen two years ago, I’ve been getting requests to make a non-pork version of the rich collagen laden broth. Well… here it is finally!

Tori Ramen (鳥ラーメン) is nothing new. People have been using chicken stock to make ramen since the early days of ramen’s popularity in Japan. Sadly, it just doesn’t get as much respect as its unctuous porcine cousin. It probably has to do with the fact that chicken contains a lot less marrow fat than pork, so it’s almost impossible to get the same richness in the soup. That’s why chicken stock is often used in lighter styles of ramen such as shoyu (soy sauce) or shio (salt)

But getting a rich stock isn’t totally impossible. What chicken lacks in fat, it makes up for in collagen, especially in the joint areas and skin. Because chicken wingtips have a high ratio of cartilage and skin to meat and bone, they’re perfect for getting a rich sticky broth.

If you’re looking for an exact replica of Tonkotsu ramen, you’re going to be disappointed, but in many ways, this chicken ramen is better. First of all, it takes a lot less time to make. Secondly, while it may not qualify as healthy, it’s certainly healthier than a broth made of pork fat. Lastly, the relatively mellow flavors of the chicken stock base allow all the other flavors to shine through. To put it simply, it’s more Pierce Brosnan than Daniel Craig.

I usually top Tonkotsu ramen with Mayu (burnt garlic oil), but since the burnt garlic might overwhelm the milder chicken, I made a fried scallion oil instead. After mincing the white parts of a few scallions I fried them in sesame oil until they were just shy of burnt, then I added a splash of soy sauce to the hot oil which bubbles up furiously, caramelizing around the scallions and giving off a savory aroma that will make you want to lick the air around you.

Since topping this chicken ramen with pork chashu would negate the benefits of a purely chicken ramen I came up with a chicken chashu you can use as a topping. Since it’s hard to get good ramen noodles in the US, I like to make my own noodles, but thin Chinese style yellow noodles will work in a pinch. Add some scallions menma and boiled egg and you’ll have a world-class ramen worthy of any ramen shop with a line wrapping around the block. 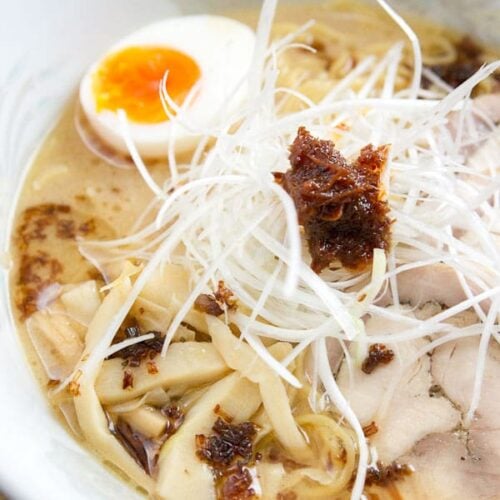 What do you think?131 Cancel reply