There was a time when Chop Suey was synonymous with Chinese food, and neon-lit signs towered over Main streets across the country. Despite being an early ambassador for Chinese cuisine in the US, Chop Suey was most likely created in America. With a history stretching back over 150 years in this country, it’s one of the first known examples of Chinese-American cuisine.

At its core, Chop Suey is a quick stir-fry, including a little meat and a lot of vegetables, that’s finished off in a savory sauce that’s thick enough to coat everything with flavor. Sounds pretty good, huh? So how did this standard-bearer fall from being the face of Chinese cuisine in America to become a culinary abomination?

Trends change, and dishes like Chop Suey and Moo Goo Gai Pan have fallen out of favor. I suspect that as Chinese-American cuisine evolved to include more proteins, restaurants preferred pushing patrons towards more protein-heavy dishes that they could charge more for. It’s also not a dish well suited for take-out as the vegetables tend to get soggy and mushy when they’re not eaten right away.

If you follow these basic rules, you’re all but guaranteed to be sitting down to a delightfully easy and delicious Chop Suey that comes together in about 15 minutes. The type of vegetables you add and whether you serve it over rice or noodles is entirely up to your tastes and what you have in the fridge, so get creative and have fun with this classic.

Why this recipe works:

Like any stir-fry, the ingredients for this one are pretty flexible, just make sure you maintain the relative ratios of protein and veggies to sauce, and you should be good.

Protein – I usually add about 200 grams of protein to my Chop Suey. For this recipe, I’ve used pork shoulder chops, but any tender, flavorful cut of meat or seafood such as chicken or shrimp will work. If you want to make this vegan friendly, you substitute your favorite plant-based protein, such as firm tofu, seitan, or tempeh. If you’re using tofu, be sure to use firm tofu and drain it well on a rack for about 30 minutes before you marinate it, so it doesn’t get watery.

Chicken Stock – The stock forms the base for the sauce, so it’s best to use a good quality chicken stock. If you want to make this plant-based, you can substitute a vegetable or mushroom stock instead.

Oyster Sauce – This is the primary seasoning ingredient for both the marinade as well as the sauce. It has a wonderful balance between savory and sweet and imparts loads of umami without making the dish taste overly fishy. If you want to make this (or any dish calling for oyster sauce) plant-based, just substitute half the called for amount with soy sauce, and add a pinch of sugar. For example, instead of 1 tablespoon of oyster sauce, you can add 1/2 tablespoon of soy sauce and a 1/4 teaspoon of sugar.

Seasonings – The other seasonings are white pepper and sesame oil. You can substitute black pepper for the white pepper if you want. The sesame oil is optional, but it adds a nice nutty flavor to the dish.

Starch – Starch is used in both the marinade for the meat as well as the sauce. In the marinade, it helps keep the meat juicy and tender. For the sauce, it’s used to thicken it. I prefer potato starch for thickening sauces. Unlike cornstarch, it thickens without clouding the sauce, and it does not get gummy, even after it cools. Bob’s Red Mill is the most common brand in the US.

Aromatics – Together with the seasonings, the garlic and ginger in this recipe give Chop Suey its flavor.

Vegetables – I’ve added about 500 grams (a little over a pound) of vegetables to my Chop Suey. There are 70 grams of each vegetable, except for the cabbage in this recipe. I doubled the amount of cabbage because it has a tendency to shrink so much when cooked. I’ve added celery, onions, carrots, bell peppers, cabbage and snap peas to mine, but any colorful assortment of veggies with a relatively low moisture content should work. Some ideas include: bok choy, green beans, zucchini, jicama, bean sprouts, broccoli, kohlrabi, peas, corn, and asparagus.

Carbs – Chop Suey is often served over noodles or rice. I used thick chow mein noodles, but any Asian-style noodles should work. You can also use crispy fried noodles or rice.

How to make Chop Suey

As with any stir-fry, Chop Suey goes quickly once you start cooking, so be sure to prep all of the ingredients before you start cooking, and have them ready to go near your pan. You’ll also want to time your noodles or rice to finish cooking around the same time as the Chop Suey.

The first thing you’re going to want to do is to marinate your protein. To do this, cut it into 1/4-inch thick strips and add it to a bowl along with the Shaoxing wine, oyster sauce, and potato starch. You can marinate this ahead of time, but all it really needs is the time you’ll spend preparing the other ingredients.

For the sauce, just whisk together the chicken stock, oyster sauce, potato starch, white pepper, salt, and sesame oil and set this aside.

Once you’ve prepped all of the vegetables, heat a large frying pan over high heat and add the vegetable oil, garlic, and ginger. Swirl them around the pan until fragrant, but don’t let them brown yet.

Add the celery, onions, carrots, and bell pepper and stir-fry the mixture until the onions have started turning translucent, but they’re still crisp. You don’t want the vegetables to be fully cooked, or they will end up mushy by the time the dish is done.

Stir-fry the pork in the center of the pan until it’s mostly cooked through and then toss it together with the vegetables.

Add the cabbage and snap peas and continue stir-frying the mixture until the snap peas are vibrant green, and the cabbage has wilted a bit. Be careful not to overcook these or they’ll lose their color and texture.

Give the sauce a stir to recombine the settled starch and then pour it over the Chop Suey. Toss everything together until the sauce is nice and thick and has coated all of the ingredients.

Serve the Chop Suey immediately on a bed of rice or noodles.

What does Chop Suey mean?

According to E. N. Anderson, a cultural anthropologist, the name “Chop Suey” can be traced to a dish native to Taishan called tsap seui (杂碎), which means “miscellaneous leftovers.”

Although Chop Suey has Chinese roots, it is one of the first examples of Chinese-American cuisine. There are many myths of how it was invented, but it’s most likely an adaptation of a dish from Guangdong province brought to the US by Chinese laborers. Like any group of migrants, they craved foods from their homeland, but without access to the same ingredients, they made do with the ingredients that were locally available at the time.

How can I make Chop Suey Vegan?

This recipe is easily converted by substituting the pork, chicken stock, and oyster sauce with your favorite plant-based protein, vegetable stock, and soy sauce. See my notes in the Ingredients section above for specific details.

Can I use a wok to make Chop Suey?

Although stir-fries are best made in a very hot wok, I don’t recommend using a wok on most home stoves. When used on a wok-burner, woks allow the flame from the stove to travel up the sides of the pan, heating it evenly and giving you tons of surface area to work with. Most western home burners are engineered to evenly heat flat-bottomed pans and don’t put out nearly enough energy to heat the sides of a wok. This defeats the whole purpose of using a wok since you will be limited to a very small area in the center that is hot enough. Instead, I recommend using a large flat-bottomed frying pan, which will give you plenty of surface area that is evenly heated.

How is Chop Suey served?

Because this dish has a thick, flavorful gravy, it’s best served over plain rice or noodles. It can also be served on a bed of fried rice or crispy fried noodles. 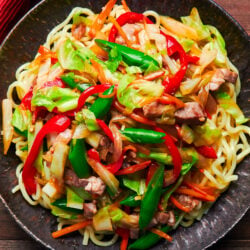