Like most Asian countries, Japan has its own version of fried rice. It’s called Yakimeshi (焼きめし), and it literally means pan-fried rice. Like it’s cousin Yakisoba, it can be prepared on a giant steel griddle called a teppan, but in most homes, it’s made in an ordinary frying pan.

In some regions of Japan (including Tokyo) fried rice is more commonly referred to as Chahan (チャーハン), which is the Japanese transliteration of the Chinese Cha Fahn (炒饭). As the name implies, the dish came from China, Yakimeshi differs from the original in one important way: it’s made with Japanese short-grain rice. This gives it a toothsome springy texture that makes it unique among Asian fried rice.

What’s the difference between Yakimeshi and Chahan?

While there are a lot of purported explanations out there (like when the egg gets added), the only consistent reason is that the difference is regional.

What are the ingredients for Japanese fried rice?

At its most basic, Yakimeshi is made with Japanese short-grain rice, egg, and seasoned meat. Since I often make Yakimeshi as an entree for lunch, I like to up the amount of protein by adding a lot of egg. If I have some leftover Chashu or Kakuni I’ll chop it up and it, but to make this as simple as possible I’m making this with ham.

To season it, I use a combination of salt, pepper, soy sauce, and sesame oil, and scallions serve as both a garnish and a seasoning. 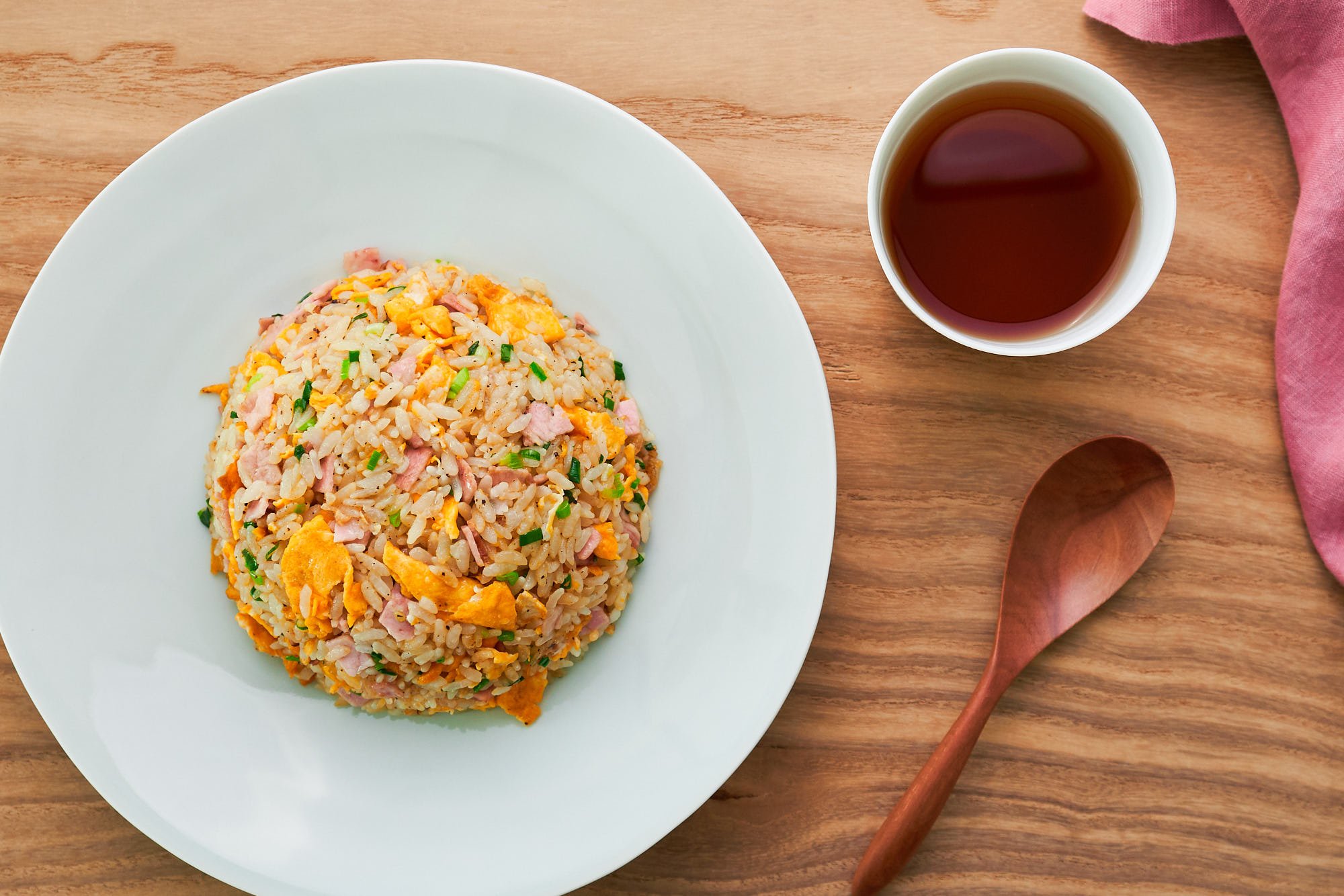 Why use leftover rice?

Most fried rice is made with long grain rice which does not stick together due to a higher ratio of amylose to amylopectin. Japanese short-grain rice has a higher proportion of amylopectin, which is what gives it its sticky, slightly chewy texture. While it’s this texture that makes Yakimeshi so good, it can be challenging trying to stir fry the rice when it’s clumping together.

By leaving the rice in the fridge for a few days, it gives the starch in the rice a chance to retrograde, making it hard and brittle. This makes it easy to crumble with your hands down to the individual grains, which makes it a lot easier to stir-fry. Once it’s reheated the soft, sticky texture returns, but not before each grain has been coated in oil, preventing the rice from sticking together.

How do you make Yakimeshi?

The process is relatively simple. I always start by scrambling the eggs in oil. I used to remove the eggs from the pan before adding the rice, but I’ve found that adding the rice into the eggs before they’re fully cooked helps lubricate the rice, making it easier to stir-fry.

Once the rice is reheated and crumbly, I’ll add the other ingredients in order by the amount of time they take to cook. For instance, if I were adding carrots, I would add them first as they take the longest to cook.
While you can use two spatulas to mix the ingredients together, it’s more efficient (and looks way cooler) to toss it in the pan. Check out the video below to learn the technique.

Finally, the seasonings go in, and in the case of the soy sauce, I drizzle it along the rim of the pan. By putting it in direct contact with the pan, the soy sauce caramelizes almost instantly, coating the rice instead of soaking into it. This also gives the Yakimeshi a wonderful wok-fried flavor that’s the hallmark of good fried rice.

To finish it off, I toss in some chopped scallions and a drizzle of toasted sesame oil which adds both color and flavor to the fried rice. 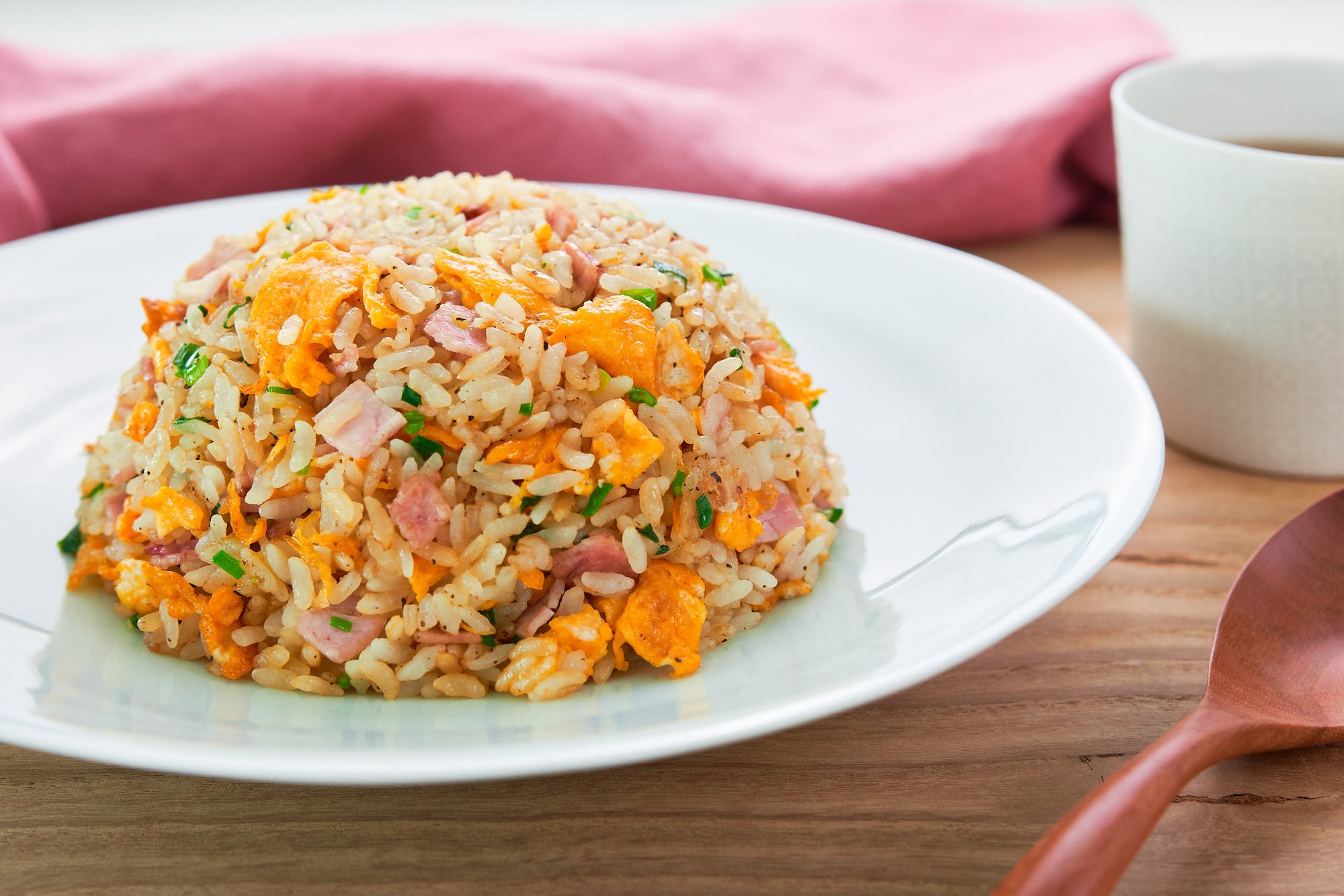 What are some other types of Japanese fried rice?

Like any fried rice, there are almost an infinite number of combinations you can make by changing, the protein, vegetables, and seasonings. One popular variation is to add curry powder to make a curry fried rice. Another one is to add chicken instead of ham and season it with ketchup. This is the basis for another Japanese fried rice dish called Omurice. I also often make Yakimeshi using leftover meat and veggies from dinner the night before. 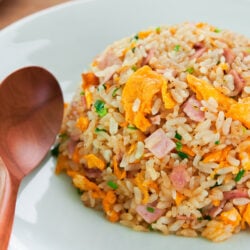