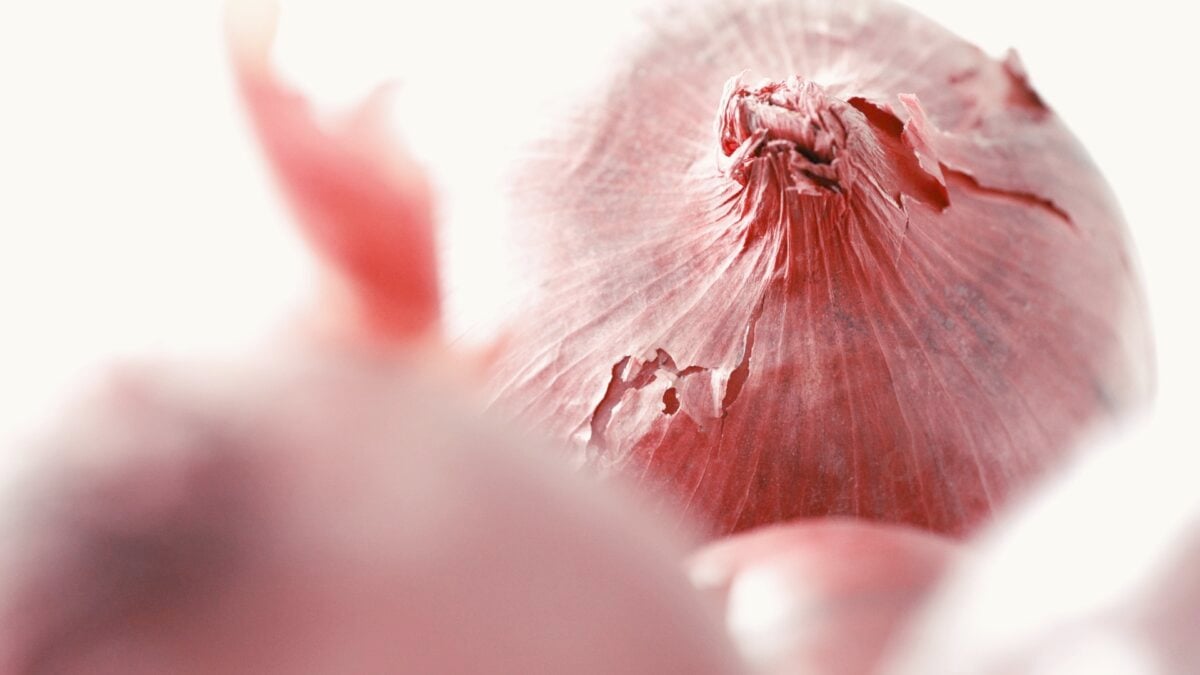 If you’ve been cooking for some years, you’ve probably spent untold hours chopping onions. It’s a chore, that’s a necessary evil of cooking because onions form the basis of countless dishes. The traditional way of cutting onions has never sat well with me because you end up with a chunk of onion that you either toss and waste or spend extra time chopping it separately. That’s why I’ve spent the past few weeks dissecting onions to figure out the best way to chop them. While I can’t say I’ve found a way to take all the hassle out of chopping onions, I have found a significantly better technique to chop them.

Before I show you the ultimate onion chopping technique let’s get on the same page about an onions anatomy and some basic terminology. Onions are essentially a layered sphere with a root end and a top end. 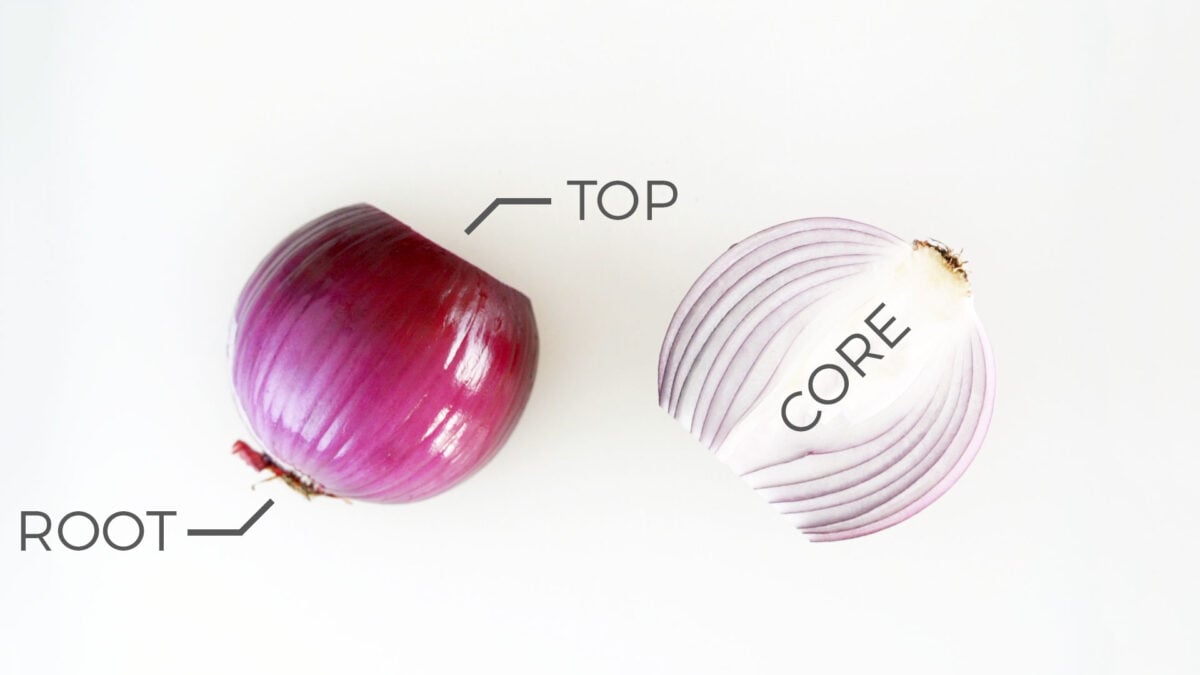 When you cut an onion in half, it exposes the layers, and you can see the core in the center.

How to Prep an Onion

When you want to chop an onion, the first thing you have to do is to prep it. There are a lot of ways to do this, but the most efficient method is the following: 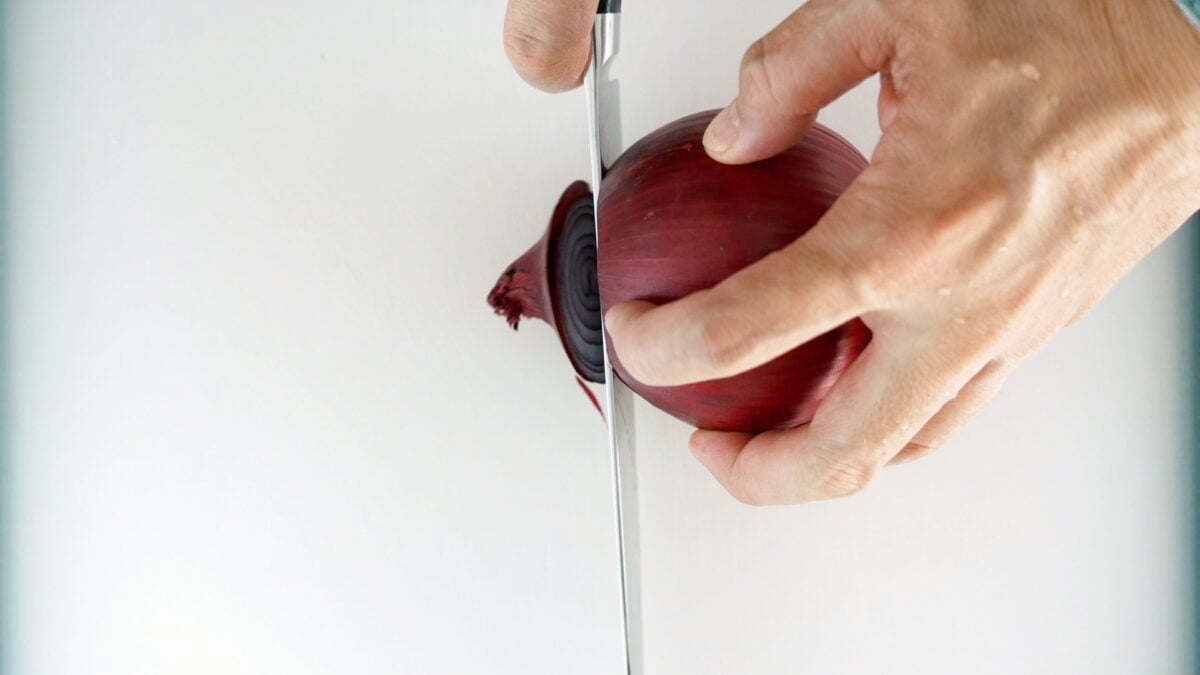 Cut the top off. 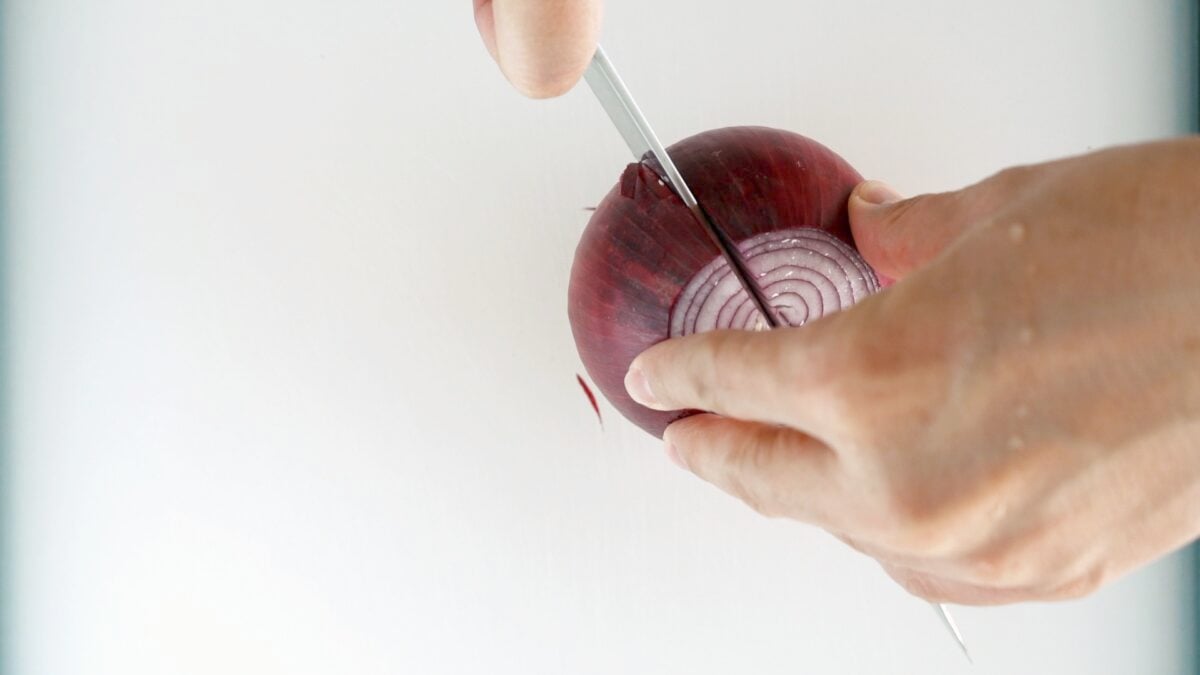 Slice the onion in half from the top to the root end. 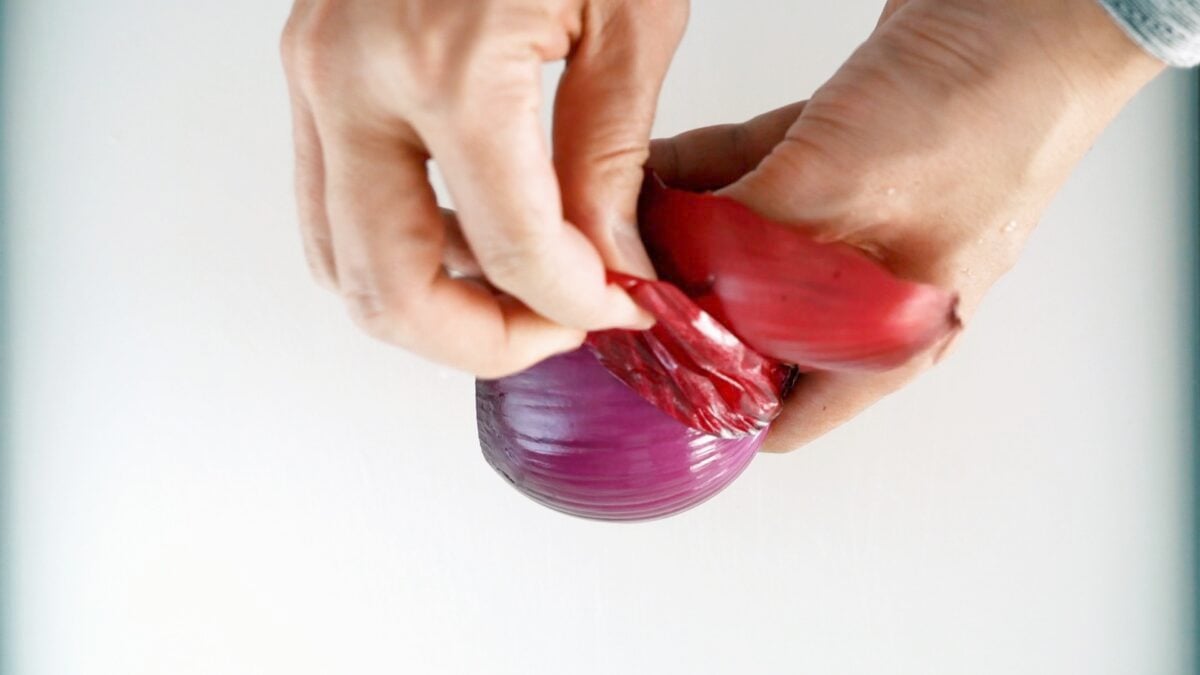 The reason why we don’t cut the root end off is that this, along with the core of the onion, is what’s going to hold our onion together as we chop it.

This is the traditional method of chopping onions that most chefs use. It’s certainly not the worst method, but it’s not perfect either. 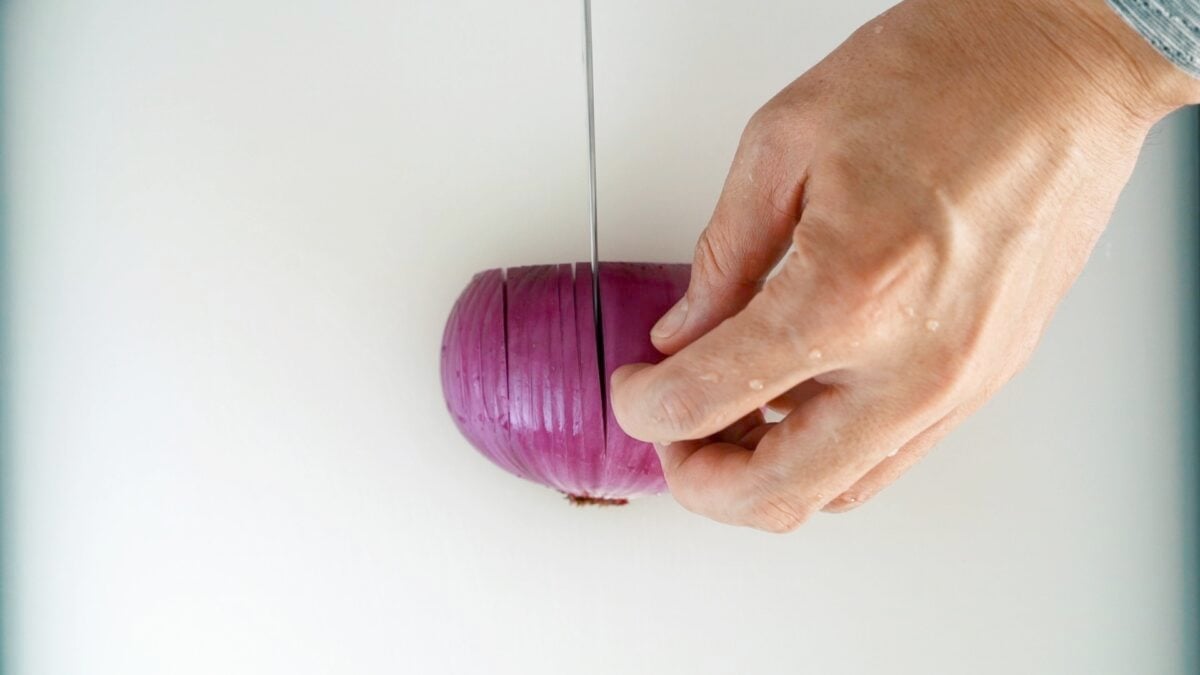 Slice vertical slits in the onion from the top to the root end. 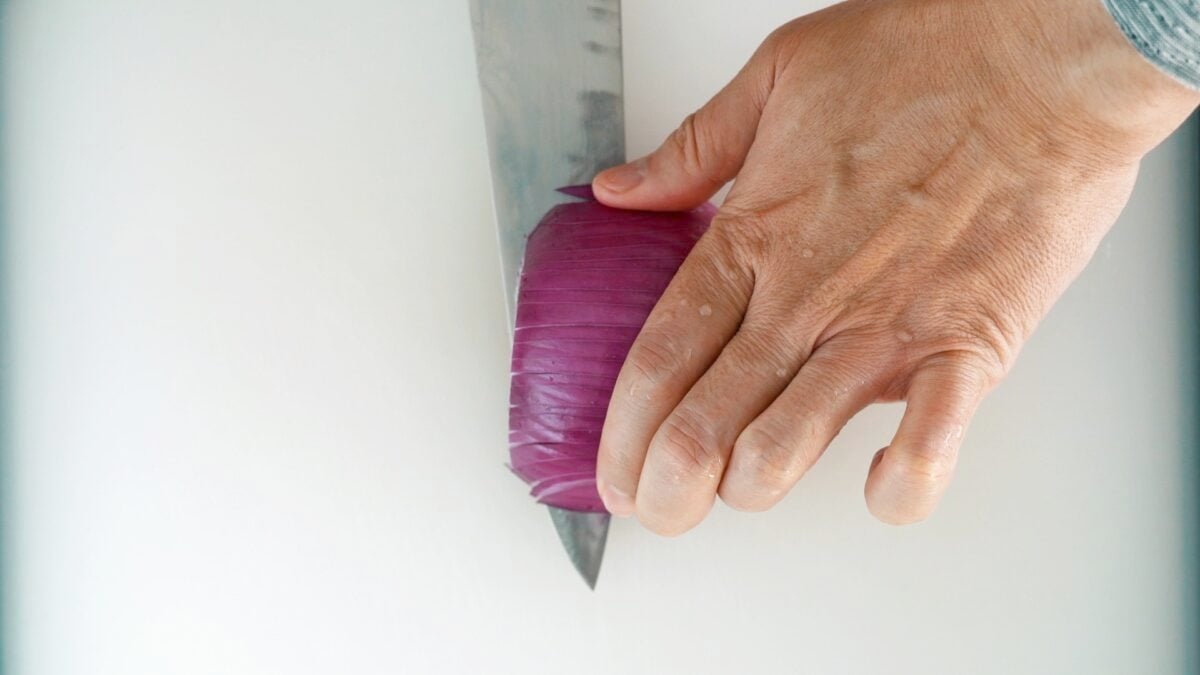 Slice two to three horizontal slits in the onion from the top towards the root end. 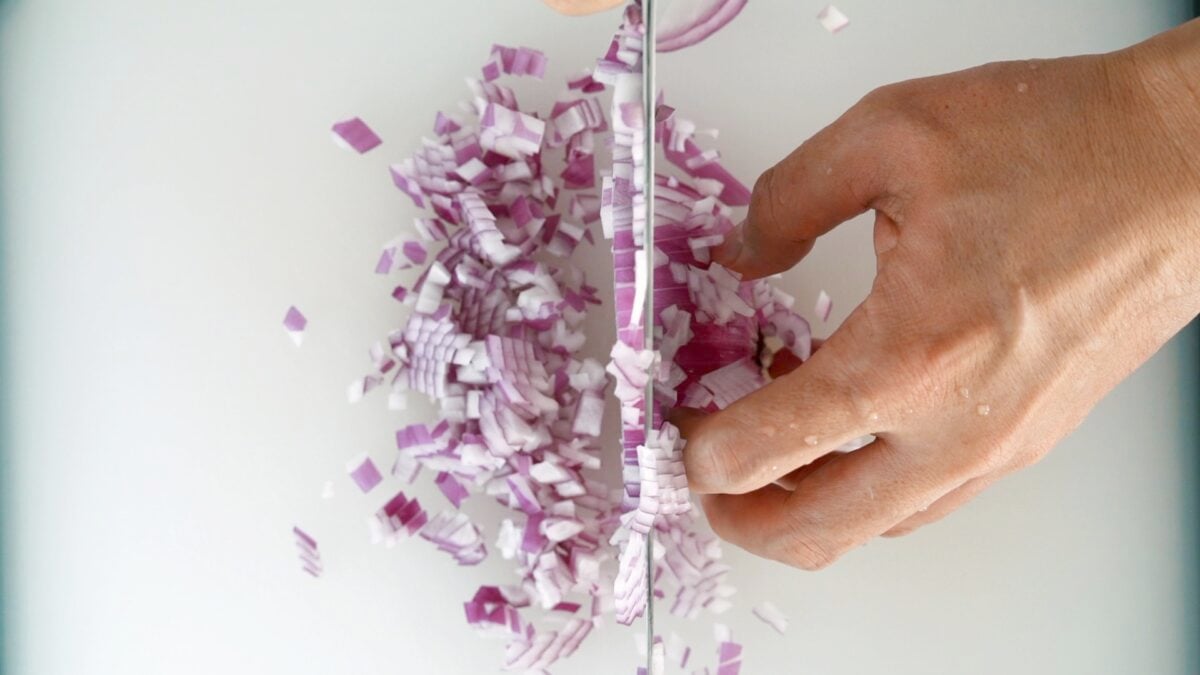 Turn the onion 90 degrees and chop the onion perpendicular to the first set of vertical slits.

Here’s the problem with this technique: you end up with a big chunk of onion towards the root end that you then have to chop up separately. It may not seem like a big deal, but when you’re dealing with a mountain of onions, it’s a lot of extra work. 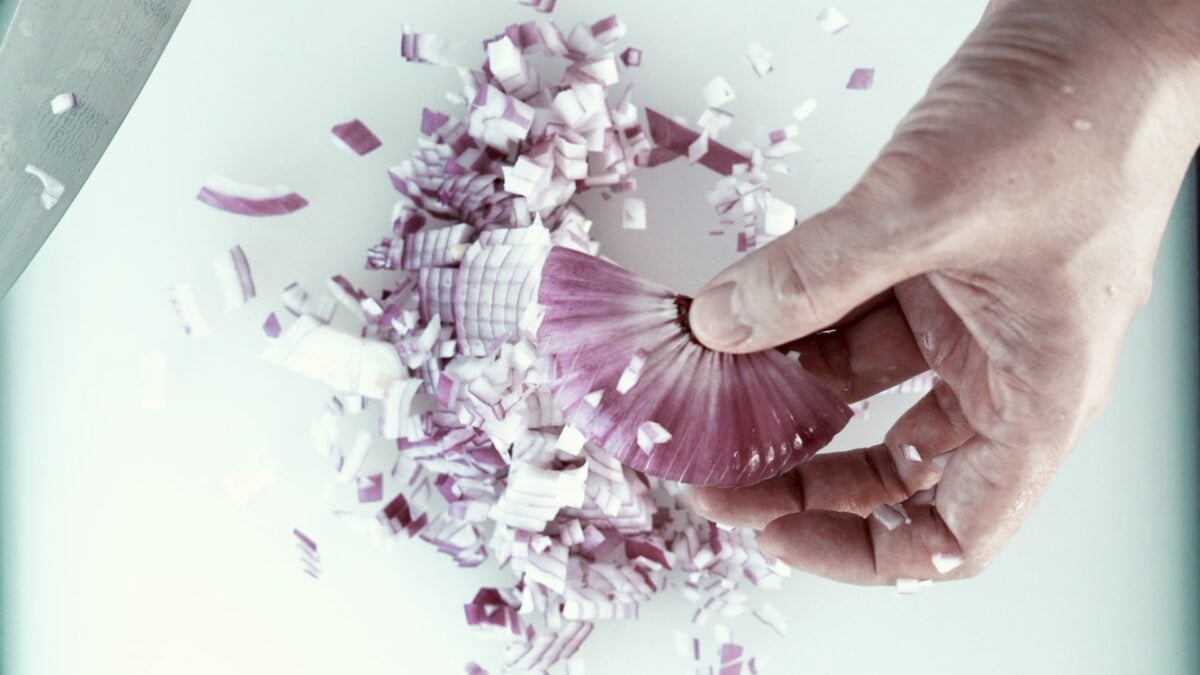 Some of you may be thinking that if you just cut the slits deeper, you can get all the way to the root end, but then the onion will start to fall apart as you chop it. This makes it very hard to chop the onion evenly, and it also presents a danger of cutting yourself.

A Better Way to Chop Onions

After taking apart a dozen onions, and thinking about the internal geometry of them, I realized that when sliced in half, the core of the onion isn’t sloped like the outer layers. Since it’s essentially flat, there’s no need to cut horizontal slits into it.

After realizing this, I modified the traditional method, cutting horizontal slits into the sides of the onion towards the center, instead of through the whole onion, from the top to the root end. This leaves the core intact, holding the onion together, so you can cut the vertical slits deeper without affecting the stability of the onion. This, in turn, allows you to chop the onion faster, finer, and more evenly. Here’s a video on my full onion chopping method, and you can you scroll down a bit more for my step-by-step process with photos. 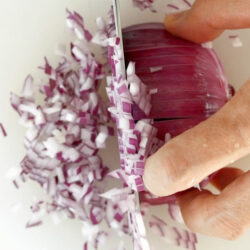 Best Way to Chop an Onion

Here's how to chop an onion quickly, safely, and without waste. It's a modification on the traditional 3-axis chop that allows you to get small, even-sized pieces of onion right up to the root end, and it's faster than any other method that I've tried.
Course Basics

Grams + US Cups - US Standard

If you enjoyed watching this, please let me know by heading to my YouTube Channel and giving this a like??, Subscribing to my channel, and leaving a comment to let me know what you think. These videos take a ton of time to produce and hearing from you is the best motivation to keep me going.