What is Japanese Curry?

Japanese Curry is a roux thickened stew that typically includes a protein, onions, carrots, and potatoes. It comes in varying levels of spiciness; still, most Japanese curries have a sauce the texture of a thick gravy, which makes it pair well with Japanese short-grain rice. Thinner curries make Japanese rice lose its stickiness, which is considered undesirable.

What is the history of Japanese Curry?

Most people are surprised to hear that Japan has its own version of curry, and the reaction makes sense, given that most Japanese foods have a more subtle flavor profile.

The history of curry in Japan dates back about 150 years to the early Meiji era when military advisors from the British Empire introduced the concept of curry as an efficient means to feed a large number of hungry troops. These young men would take their newly acquired taste for curry home, and by 1906 there was at least one company producing and “instant” curry mix.

House Foods followed with their version in 1926, and in 1954, SB Foods released the first solid curry roux. Its popularity has only grown since then, and these days, the shelves of every convenience store and supermarket are lined with reheatable packets of premade curry, as well as a myriad of curry-flavored foods such as chips, crackers, noodles, and fried rice. 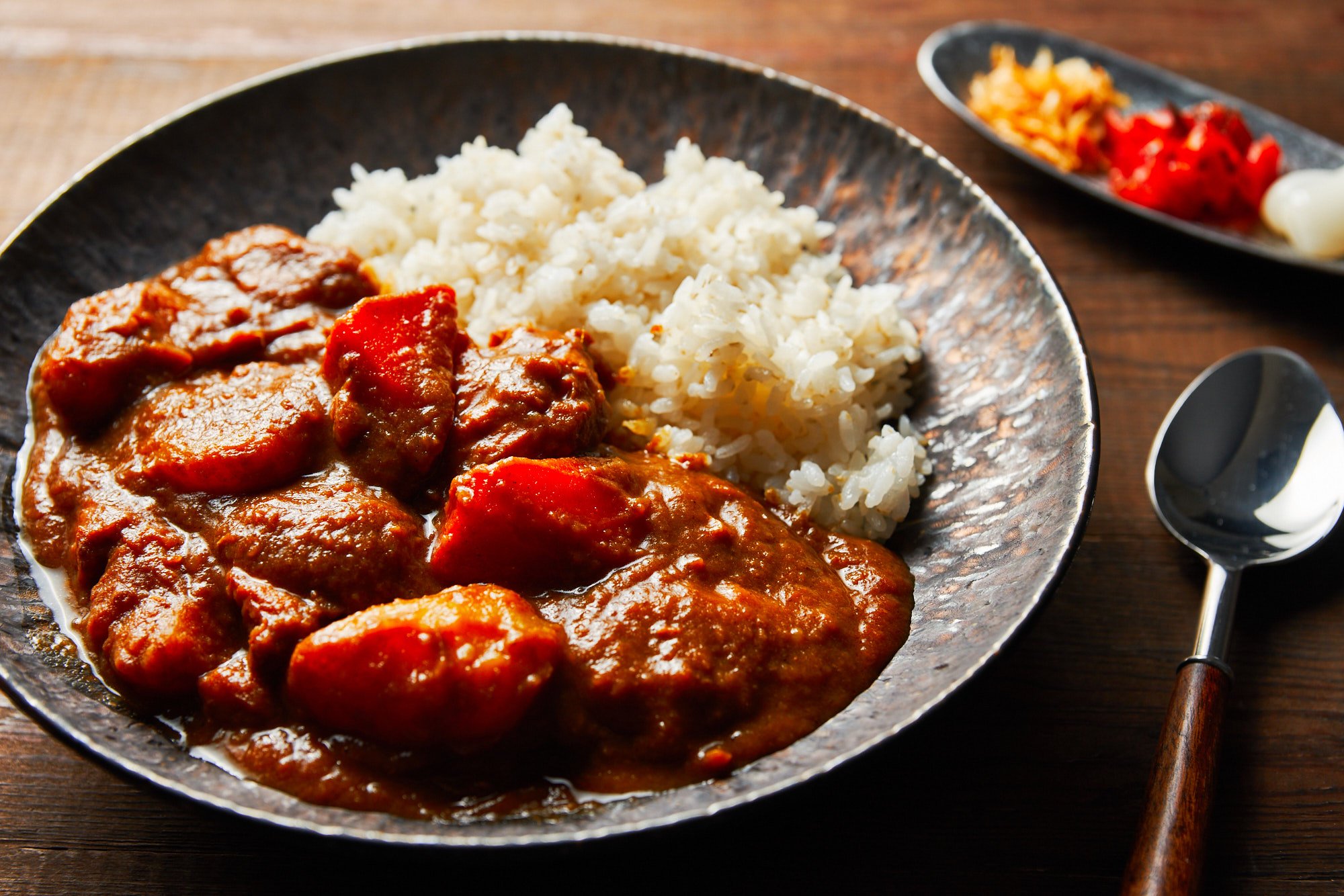 What makes Japanese Curry different from other Asian curries?

Because Japanese people are not used to eating spicy foods, curry in Japan has a balancing sweetness that’s added using ingredients such as fruit, honey, or even sugar. Because it includes a fat and flour roux, it’s also much thicker than most curries. Finally, since the Japanese version of curry originally came from Europe, the ingredients (such as potatoes and carrots) are more like a stew than other Asian curries.

What is Curry Roux?

These days, most Japanese households use blocks of instant curry roux that look a bit like a giant chocolate bar. They’re produced and sold by brands such as SB Foods, House Foods, and Glico, and they come in sweet, medium, and spicy varieties. The curry is made by sauteing onions and then adding a protein (such as chicken, pork, or beef), carrots and potatoes along with water before cooking it until the meat and potatoes are tender. The roux blocks go in at the very end to season and thicken the curry.

Although they taste great, these Japanese curry roux blocks are often loaded with hydrogenated fats, sugar, and MSG, as well as other questionable additives. This is why I’ve been working on a recipe for making Japanese Curry from scratch for over 10 years.

What are the secret ingredients for a restaurant-style Japanese curry?

Although they won’t admit it, many restaurants also use packaged roux mixes to make their curry, the way they set their curry apart from others is through technique and the use of Kakushiaji.

Kakushiaji (隠し味) literally means “hidden taste,” and it’s a cooking technique that involves adding a very small quantity of a contrasting ingredient to make subtle improvements to the taste of the dish. In the case of curry, this includes things like coffee, chocolate, vanilla, butter, chutney, fruit, etc.

The idea is to add just enough to make a subtle change, but not enough to be able to tell you’ve added that ingredient. For this curry recipe, the kakushiaji ingredients include banana, soy sauce, and cocoa powder. The banana adds sweetness and a silky texture to the sauce, you want to use a ripe (yellow, but no brown speckles yet) banana. The soy sauce adds loads of umami, and the cocoa powder lends an earthy depth as well as a rich brown color.

Once you’ve tried this recipe as written, I encourage you to experiment with different combinations of kakushiaji ingredients to come up with a curry that fits your ideal for a perfect Japanese Curry.

What are the spices in Japanese curry powder?

Since curry powder is a blend of spices, herbs, and aromatics the ingredients vary by brand. Generally most Japanese curry powders include: Turmeric, Cumin, Coriander, Fenugreek, Fennel, Dill, Cinnamon, Ginger, Star Anise, Allspice, Citrus Zest (yuzu or mandarin), Cardamom, Cloves, Bay Leaves, and Black Pepper. I have a recipe of making homemade Japanese curry powder if you want to try making it yourself. 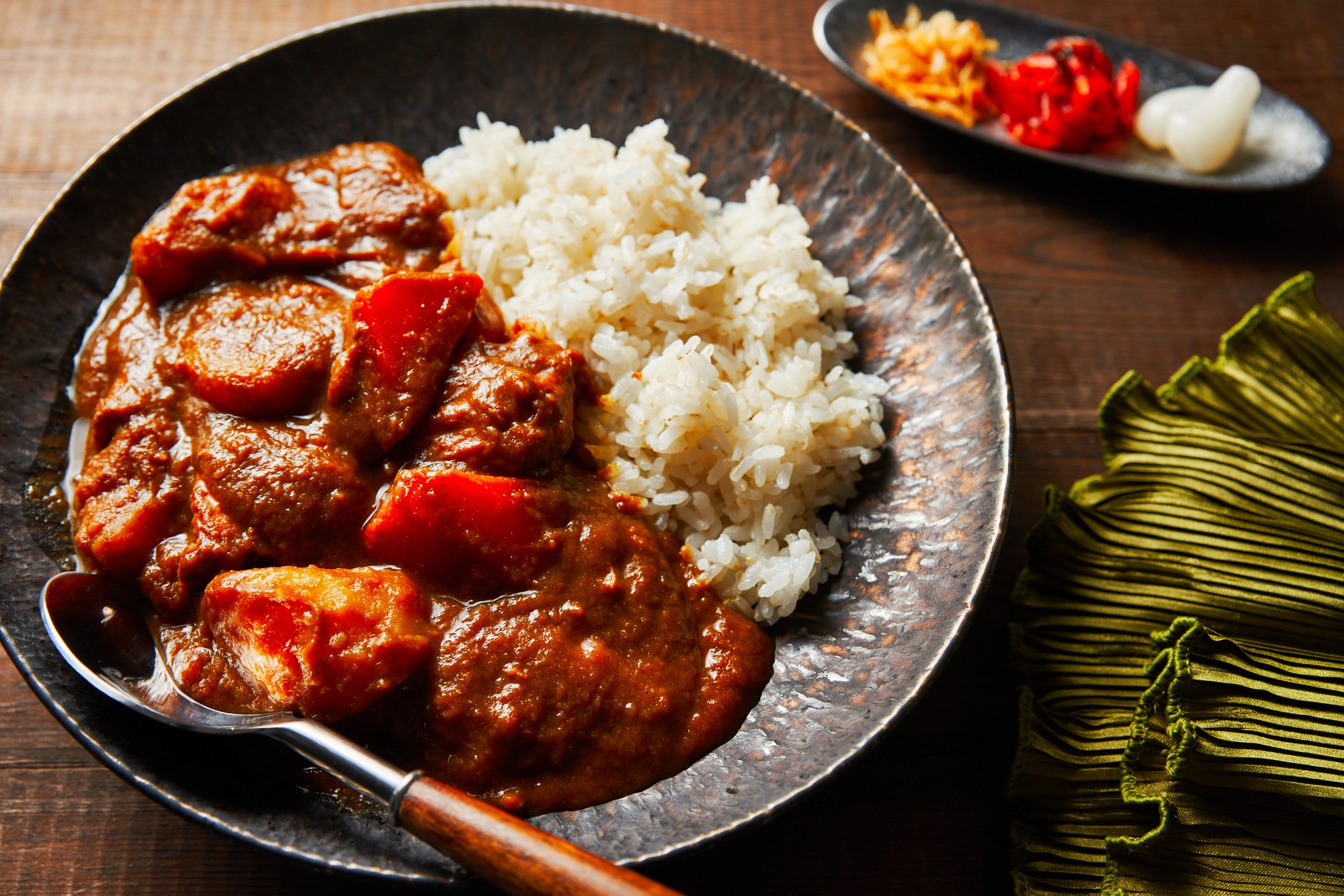 What vegetables go into Japanese curry?

The standard vegetables are carrots, and potatoes, but variations exist by region, as well as from household to household. For example, in Okinawa, they add piman (a kind of green pepper). My mom always added celery to hers and finished it with some green peas for color. I’ve even seen versions with corn, burdock, taro, or sweet potatoes. Like most stews, I think there’s a lot of room for creativity here, and it’s a chance to do some cleanup of your veggie drawer.

Is this Japanese Curry Gluten-free?

It includes soy sauce, so it isn’t, but since there’s no Japanese curry roux in this, there is no wheat flour in it. To make it gluten-free, just make sure you’re using a gluten-free soy sauce (such as tamari).

How do you make vegan Japanese curry?

Since this recipe doesn’t contain butter or chicken stock, it’s straightforward to make vegan. Just substitute your favorite plant-based protein for the chicken. I also have a vegan Japanese curry recipe that’s loaded with mushrooms and chickpeas that you can check out. 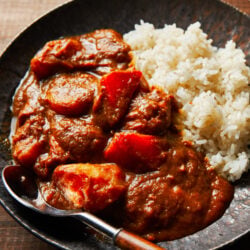 What do you think?104 Cancel reply