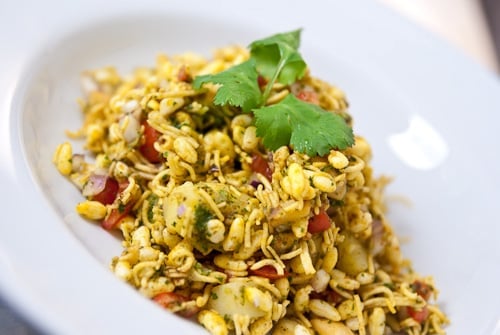 When it’s hot and muggy outside and your appetite has withered away in the sweltering summer heat, Bhel Puri is just the kind of dish you need to awaken your taste buds with an explosion of colors, textures and flavours.

This is my post for June’s Dinner and a Movie event. The June movie, Monsoon Wedding is chock full of scenes of the hectic New Delhi street scape, depicting the ubiquitous food scene. It only seemed natural to do a post on chaat, Indian street food.

I know bhel puri is more typical of Mumbai street food, but I hope you guys can forgive this transgression as bhel puri is one of my favourite snacks… ever, and I just couldn’t resist the opportunity to post about it.

Bhel Puri is a mixture of puffed rice (think giant Rice Krispies), sev (fried chickpea noodles), tossed with chilies, vegetables and some sweet and tart chutney’s. The textures of the crackly rice, crunchy noodles, and crisp veggies meld perfectly with the salty, sweet, sour, and spicy seasonings that coat each morsel.

The mere smell of the cilantro, cumin and lime is enough to make me salivate like a Bullmastiff, but when you lay eyes on the confetti of colors on a plate before you, it’s hard to resist the primal urge to pick up the plate and inhale its contents.

I’ve never tried it, but if you don’t have an Indian market near you, you could probably get away with using rice cripsies for the puffed rice and crumbled instant ramen in place of the sev.

Once it’s mixed, it needs to be eaten right away for the same reason that you don’t want to let cereal steep in a bowl of milk. This makes enough for 4-6 appetizer sized portions, but 2 of us managed to devour the whole batch in a few minutes, so it does just fine as a meal too.