Tantanmen is a spicy variant of ramen that’s based on Chinese Dandan Mian. It’s traditionally made by infusing ramen broth with a spicy blend of chili oil and sesame paste. These days, a soupless variant called Tsuyunashi Tantanmen (literally “Tantanmen without soup”) has gained popularity, especially during the warmer months of the year.

Unlike most ramen noodle soups which can take hours or even days to prepare, this spicy ramen dish can be put together in about fifteen minutes.

The first thing you want to do is marinate the ground pork with soy sauce, mirin, and Sichuan pepper. You don’t want to mash the ground meat into a paste as you mix the seasonings in, so I recommend mixing it using a pair of chopsticks.

For the sauce, you want to grind the katsuobushi and toasted sesame seeds into a powder. I do this using a mortar and pestle, but a clean spice grinder, blender, or food processor will work as well. This gets mixed with the sesame paste, soy sauce, sugar, rayu, and sesame oil to make a smooth paste, and then boiling water is added to make a creamy sauce.

The only tricky part about this recipe is to time boiling the noodles when the pork is done. My noodles took 3 minutes to cook, so I added them to the boiling water about halfway through making the pork.

For the pork, you want to make an aromatic oil first by sauteing about 80% of the scallions in vegetable oil and then adding in the grated ginger and garlic. Once the mixture has browned, add the doubanjiang and stir-fry for about twenty seconds to infuse the oil with heat.

Finally, the marinated pork goes into the pan, and you can use a chopping motion with the side of a spatula to break it up into small crumbs.

When the noodles are cooked, drain them well, but do not rinse them. Transfer the ramen to a bowl and toss them together with the Tantanmen sauce (tongs work best for this).

Plate up the spicy ramen and when the pork is cooked through, top the noodles with the savory pork.

I like to finish my Tsuyunashi Tantanmen with fried onions and some cayenne pepper which lends a nice texture and an extra fiery kick to the dish.

Tsuyunashi Tantanmen (汁なし担々麺) is a variation of Tantanmen, which is the Japanese version of Dandan Mian. Although Tantanmen is usually served like ramen in soup, tsuyunashi (汁なし) literally means “without soup,” so this falls in the same category as other soupless ramen dishes such as aburasoba(油そば), mazésoba(混ぜそば), and mazémen(混ぜ麺). It’s most commonly served with a spicy sesame-based taré, or sauce, and it’s topped with a savory stir-fry of ground pork.

It’s not clear who exactly created the soupless variety of Tantanmen, but it’s based on a noodle soup that’s generally credited to Chen Kenmin of Shisen Hanten. Chef Chen is known for adapting dishes from his native Sichuan province in China to suit the Japanese palate, and this spicy ramen is based on Dandan Mian (担担面). Since ramen was already a popular dish in Japan, the Chef used some of the flavors from Dandan Mian, such as sesame and chili oil but packaged them in the familiar format of ramen for his Japanese customers. These days, this soupless variety of the dish has become quite popular, which brings it closer to the Chinese original, but it still retains a unique Japanese taste signature.

No, most versions of this dish are going to contain meat. This particular recipe contains ground meat in the topping and powdered smoked fish in the sauce. The ground meat is easily substituted with a flavorful mushroom. On the other hand, the fish powder will be a little harder to replace as it is included to provide both umami and a slightly smoky flavor to do the sauce. This may require a bit of experimentation to come up with an alternative, but if you find a good solution, I’d love to hear about it.

What can I top my Tantanmen with?

This Tantanmen is pretty delicious as is, and I usually like to throw some fried onions on top for a bit of crunch and some extra cayenne pepper and ground Sichuan pepper for more punch. Other traditional toppings included boy Choy (which you can boil with the noodles), chopped peanuts, and ramen eggs. 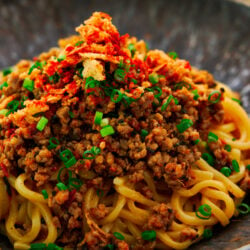