In Japan, where the ingredients, the colors, and even the temperature of a dish changes with the seasons, the hot sticky months of summer bring with them a whole host of seasonal dishes. Chilled dishes replace steamy hotpots, and whether it’s tofu, soup, or noodles, there’s a good chance you’ll find a cold preparation to help ease the oppressive heat.

What is Hiyashi Chuka?

While ramen shops still sell their unctuous bowls of steaming noodles in summer, they nearly always have chilled ramen called Hiyashi Chūka Soba (冷やし中華そば) on the menu during the summer months. The name, which literally means “chilled Chinese soba,” can be a little confusing because we all associate “soba” with buckwheat noodles, but until fairly recently, ramen was referred to as chūka soba (Chinese soba) in Japan. These days most people have shortened the name of this chilled ramen salad and refer to it as simply Hiyashi Chūka.

A bed of chilled noodles topped with a vibrant patchwork of color, Hiyashi Chūka is the kind of dish that gets your appetite going when all you can think about is jumping into an ice-cold pool. The curly toothsome noodles are dressed with a nutty sesame sauce that’s subtly creamy with a mild sweetness and acidity, which strikes a magical balance between rich and refreshing. The best part is that it’s easy to make, and involves only a few minutes of cooking time: good news if your kitchen isn’t air-conditioned. 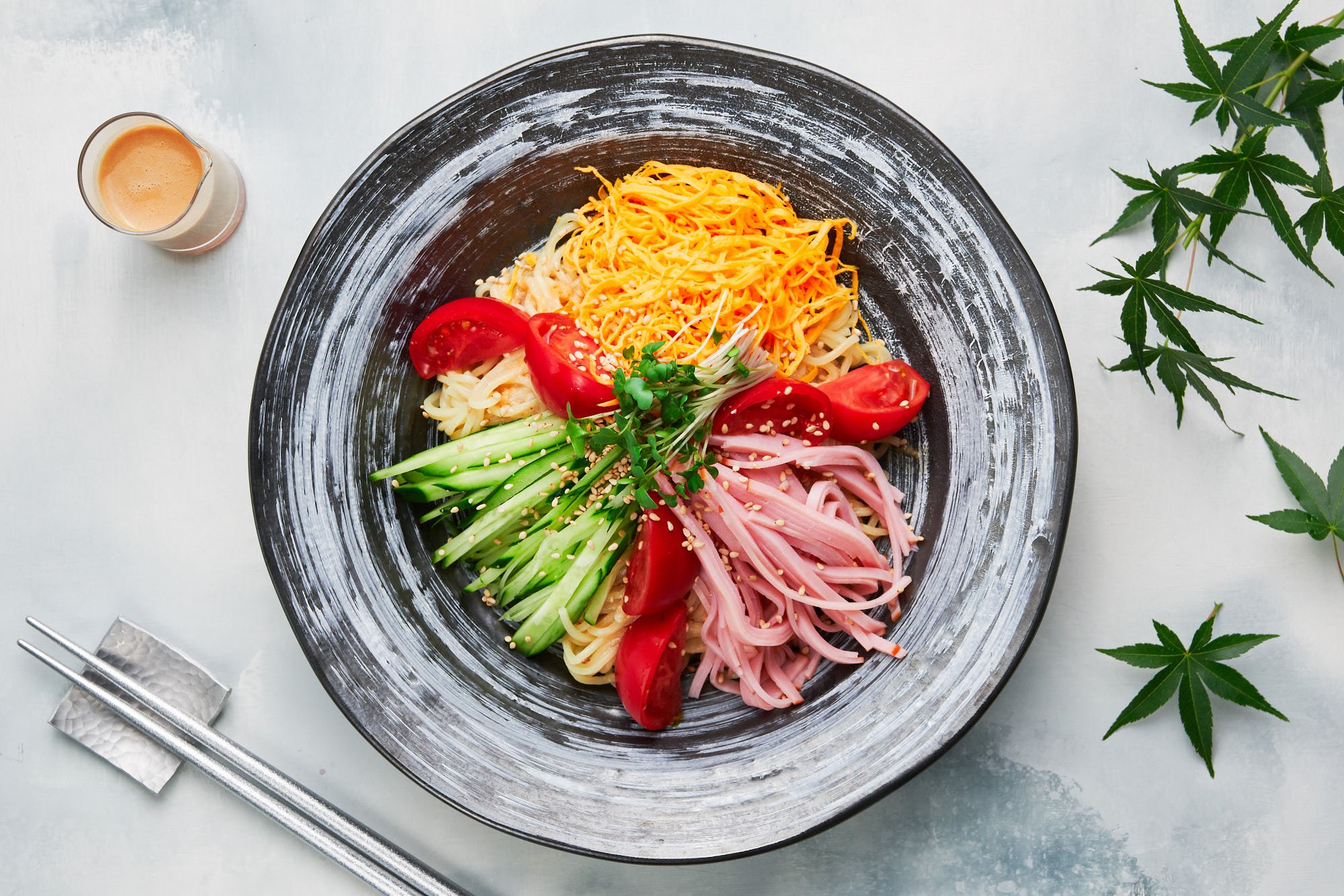 What kind of noodles do you use for Hiyashi Chuka?

Hiyashi Chūka by definition is made with ramen noodles, but in Japan, ramen noodles come in dozens of varieties. I like using thin curly yellow noodles for this as they have a nice texture when chilled and the kinks in the noodles help them hold onto the toppings as you slurp the noodles. If you can’t find fresh ramen noodles near you, you can also do this with other types of noodles such as udon, soba, or somen, but the name of the dish would become hiyashi udon, hiyashi soba, or hiyashi somen.

What are the toppings for Hiyashi Chuka?

The toppings can be subdivided into three broad categories: proteins, vegetables, and garnishes. There is a lot of room for improvisation here, and I encourage you to experiment with what’s in season around you.

Protein – The most common proteins are ham, egg, shredded chicken, and seafood such as shrimp or imitation crab, but the skies the limit here and I’ve made Hiyashi Chuka with everything from leftover roast beef to fresh mozzarella. There are also a bunch of plant-based vegan-friendly options such as edamame and tofu.
Vegetables – Summer vegetables that can be eaten raw such as cucumbers, lettuce, and tomatoes are the most common toppings for Hiyashi Chuka, but this is a very flexible area. Corn, carrots, and even broccoli make for delicious toppings for this dish, and I’d even venture to say the best vegetables are the ones you already have in the fridge.
Garnish – Here’s another area you where you can use your imagination. The traditional garnishes are things like benishōga (reg pickled ginger), sesame seeds, and kaiware sprouts, but you can have fun with different herbs such as shiso, basil, or even mint. I also like to add some texture in the garnishes so that you can try things like crumbled rice crackers, potato chips, or even tobiko. 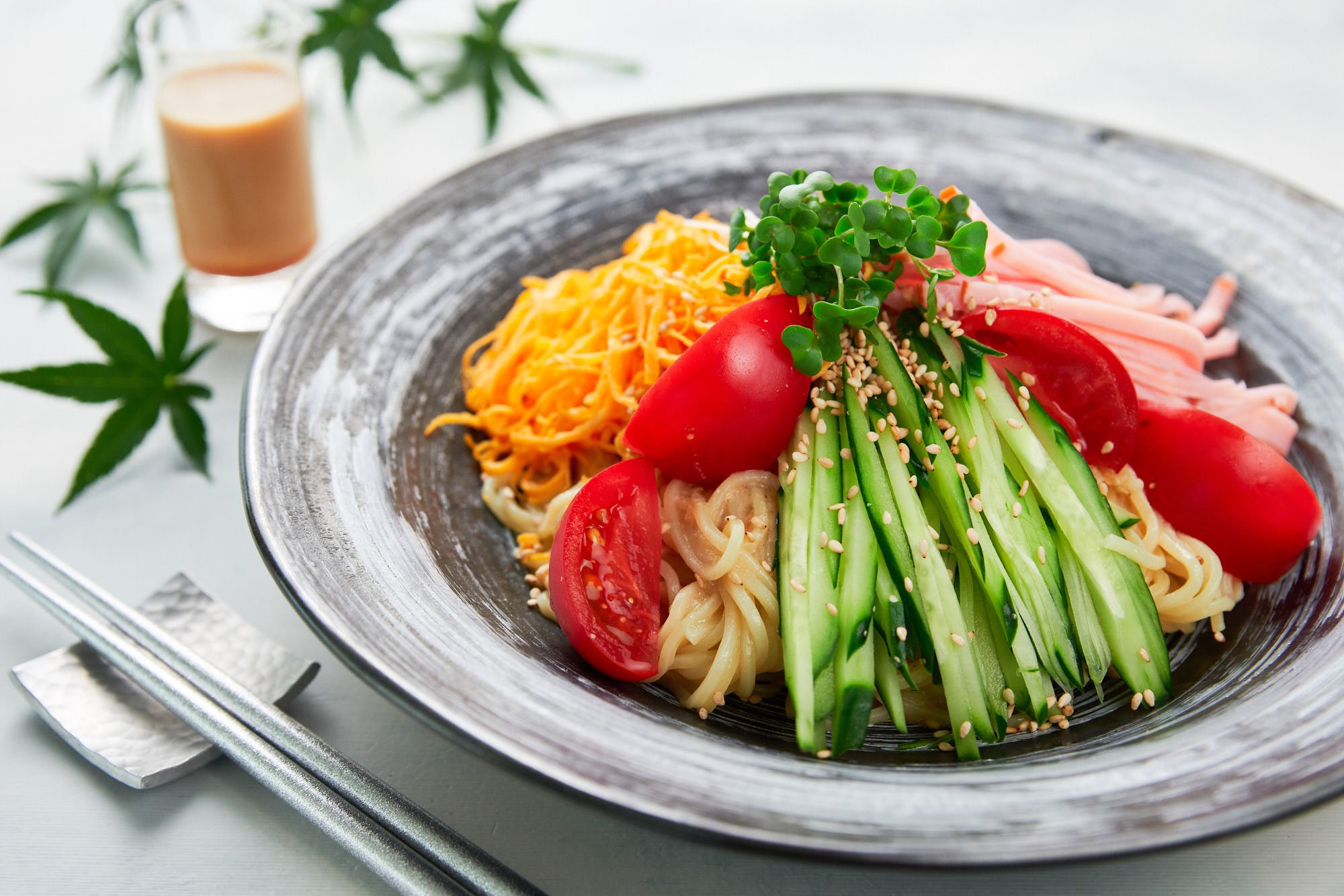 What is the sauce for Hiyashi Chuka?

There are a lot of options here, and if you’re in a rush, using a bottled dressing is perfectly acceptable. That being said, in Japan, the dressings generally fall into two categories: vinegar-based and sesame-based. The distinction is a bit confusing as they both include toasted sesame oil, but the former tends to be lighter while the latter is more creamy thanks to the addition of ground sesame seeds and sesame paste.

Soy Sauce Vinaigrette – This style of dressing is light and tangy with a balancing sweetness and a hint of nutty sesame oil. The ingredients are usually soy sauce, rice vinegar, sugar, white pepper and ginger.
Creamy Sesame – This style of sauce starts with similar ingredients to the Soy Sauce Vinaigrette, but it also includes ground sesame seeds and nerigoma (sesame paste). The latter gives the sauce some body so that it’s great for coating the noodles and toppings while adding a rich earthiness that’s just irresistible.

It’s worth noting that if you like spicy, you can add heat to either of these dressings by adding some rayu (chili oil), or your favorite Asian chili sauce such as sriracha or doubanjiang.

What are some variations on Hiyashi Chuka?

Although there is practically an infinite number of variations of this cold ramen salad, here are some fun ideas for a non-traditional Hiyashi Chuka:

How do you pronounce Hiyashi Chūka? 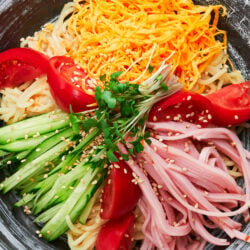 For the cucumbers you want to use a thin-skinned variety with small seeds such as Japanese, Lebanese, or English.