Adding chicken to udon noodles is a fairly common practice in Japan; however, the soup is usually a dashi broth made using kelp and dried, smoked and fermented skipjack tuna. Since these ingredients can be hard to find outside of Japan, I wanted to create a chicken udon recipe that can be made anywhere.

The result was better than I could have imagined, and it’s now become a regular part of our lunch rotation here in Tokyo. To get an umami-rich soup that tastes authentically Japanese, I’ve come up with a few tricks.

How to Make Chicken Udon

Break an egg into a container with a spout and beat it. The spout makes it a lot easier to drizzle the egg into the soup later.

For the soup, mix the chicken stock, soy sauce, sugar, and salt together in a bowl until the salt and sugar are fully dissolved.

Cut the stems of the scallions into 2-inch long pieces. Stack the scallion leaves on top of each other and slice them into thin hoops diagonally.

Prep the chicken thighs by cutting them into bite-sized pieces. Be sure to leave a bit of skin on each piece of chicken.

Preheat a nonstick chef’s pan (or another high-sided pan) over high heat. Add the chicken skin-side down.

When some fat has rendered out of the skin, add the scallion stems between the chicken and let these fry undisturbed until both the scallions and chicken are golden brown. If the scallions are browning too quickly, you can flip them over once to keep them from burning, but don’t flip the chicken.

Pour the sake over the chicken and use it to deglaze the pan. When most of the liquid has evaporated, add the chicken soup mixture and bring this to a boil.

Once it comes to a boil, you will probably see some foam floating on the surface. Use a spoon or skimmer to remove this and discard it.

Add the pre-boiled udon and cook it in the soup until it’s heated through, and the chicken is cooked.

Add half of the scallion greens, and drizzle a thin stream of egg into the pan in a circular pattern from about a foot above. This should cause the egg to bloom into fluffy clouds.

The udon is done when the egg is cooked through. Serve the Chicken Oyako Udon garnished with the remaining scallion greens and some shichimi togarashi.

What is Chicken Udon?

Chicken Udon is a broad class of dishes involving chicken and udon noodles. It can be either with or without soup. For this recipe, I’m making Chicken Oyako Udon with a chicken-stock-based soup.

What is Oyako Udon?

Oyako Udon (親子うどん) literally means “parent-child udon” and usually refers to an udon noodle soup that includes both chicken and egg. Although similar, it’s not to be confused with Oyakodon, which is a rice bowl topped with chicken and egg.

Adding chicken meat to udon noodle soups is fairly common, and you see it show up in dishes like Nabeyaki Udon (鍋焼きうどん) or Curry Udon (カレーうどん). There is also a dish called Toriniku Udon (鶏肉うどん), which literally means “Chicken Meat Udon.” These are usually made using dashi-based soup stock, and it is not very common to use chicken stock for the base. That being said, making udon soup with chicken stock is exceptionally delicious, and given its widespread availability, it should be more of a thing.

Can I make udon soup without dashi?

Dashi just means “soup stock” in Japanese, but when it’s used without a qualifier (such as vegetable dashi or chicken dashi), it usually refers to a stock made from kelp and dried skip-jack tuna. This Chicken Udon uses chicken stock instead, making for a full-flavored broth that’s easy to make. 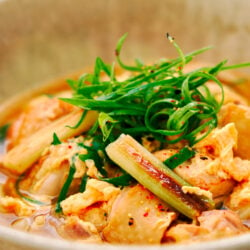 NOTE: I used frozen pre-boiled udon noodles. If you are using fresh or dried udon noodles, you will need to boil them separately before using them in this recipe. After you boil the noodles, be sure to wash them thoroughly under running water to remove any excess starch from the surface of the noodles. For dry udon, you’ll want to boil them for a minute or two less than what the package directions say. Fresh udon noodles tend to be more resilient, so you can cook them for the time specified on the package.