Udon is a thick Japanese noodle made with all-purpose flour, salt, and water. While there’s nothing complicated about the ingredients, the technique to produce uniform noodles with a slick bouncy texture can take some practice. In this udon tutorial, I will show you everything you need to know to start making these delicious noodles in your own kitchen.

How to Make Udon Noodles

The first thing you want to do is weight out your flour, water, and salt. Precision is critical for this recipe to work, so if you don’t have a scale, I recommend buying one. You can get a cheap digital scale for around $10 on Amazon, and once you have one, you’ll realize how much easier (and more accurate) it is to weigh ingredients than to measure them out with cups.

Once you have everything measured, you need to make a brine by dissolving the salt in the water. Make sure the salt crystals are completely dissolved.

Next, you want to hydrate the water in stages. This is done by drizzling the brine into the flour in 3-4 additions and then whisking the flour with your fingers. The idea is to evenly hydrate the noodles, so you end up with shaggy dough consisting of similar-sized pieces. You don’t want to have some areas that are very wet and other areas that are completely dry.

Once the flour is evenly hydrated, you can knead the dough together into a ball. If the dough is still a little brittle, try covering the bowl and letting the dough rest for 30 minutes before proceeding.

Now you can move the ball of dough to a clean work surface and knead it. You want to use the palm of your hand and your body’s weight to press the dough out. Then you can fold the dough back over itself before repeating the process 150-200 times. When the Udon dough is ready, it should be extremely bouncy and elastic.

Shape the kneaded dough into a ball by stretching out the dough’s top and tucking it into the bottom. Place the ball of dough in a bowl and cover it to keep the dough from drying out. Let this rest for one and a half to two hours. This gives the gluten a chance to relax so you can roll it out evenly (this also works for pizza dough).

After the dough has had a chance to rest, give it a generous dusting of starch and press it out into a thick disk.

Next, you want to roll the dough out from the center and in from the center and turn it 90 degrees and repeat. You should now have a sheet of dough that’s about 1/4-inch thick and shaped like a square with rounded corners, but it’s still too thick to make udon noodles.

Dust the sheet of dough with more starch, and starting from one corner, roll the dough onto the rolling pin, and roll the dough and pin together, sliding your hands out from the center as you roll it away from you. This stretches the dough in both directions at once, which helps maintain the shape.

Once the dough is about 1/8 of an inch thick, unroll it from the rolling pin and then turn it 45 degrees, so the square’s straight edge is facing you. Dust the dough with starch again, and roll it onto the pin starting from the straight edge. Rolling the dough a few times in this direction helps even out any thick spots.

Now when you unroll the dough, you should have a roughly square sheet that’s about 1/8 of an inch thick.

Generously dust the dough with starch and fold it a few times like you’re making a fan, but stagger the folds, so no two folds are directly on top of each other. This prevents the dough from getting flattened too much where the folds are.

Transfer the dough to a cutting board and add more starch between the folds. Use a large sharp knife to slice the udon noodles in a single stroke without applying much downward pressure. You can cut them as thick as you like, but keep in mind that the udon will double in thickness when you boil them.

If you let the cut noodles sit too long after they’re sliced, they can stick back together again, so I usually do this in batches and separate the udon I’ve cut by applying more starch to them and curling them into nests.

How to Cook Udon Noodles

Bring a large pot of water to boil. You don’t need to salt the water because they already contain a lot of salt. Be sure you use a lot of water to dilute the starch on the surface of the Udon.

Add as many servings of noodles as you need and stir for the first thirty seconds to keep the Udon from sticking together. Keep the pot at a low boil and cook the noodles until they are no longer opaque in the center (for noodles about 1/8-inch in diameter, it should take 12-13 minutes). Keep an eye on the pot as it can quickly boil over.

When the noodles are done, drain them, and then rinse thoroughly with cold water to remove any excess starch on the noodles’ surface.

How to Eat Udon

Udon is an extremely versatile noodle, and it can be prepared both hot and cold. Regardless of how you plan to use them, they’re always boiled first, and I recommend washing them once to rid them of excess starch.

They can then be reheated in hot water and served in soup with various toppings, or they can be served with a concentrated dipping sauce called Mentsuyu. For chilled Udon, the noodles are typically served with mentsuyu and various condiments, which can include nori, scallions, shiso, ginger, or wasabi. More recently, chilled udon has been served more like a Western salad by mixing the noodles with vegetables, protein, and a dressing. Here’s a recipe for soba noodle salad where you can swap out the soba for 2 portions of udon.

Because of their resistance to going mushy, Udon is also great for stir-fries such as Yakiudon. I’ll include a list with links to some of my recipes using Udon Noodles below.

Along with Hiyamugi and Somen, Udon is one of three traditional wheat-based Japanese noodles. It’s made differently depending on the region of Japan, but it’s typically rolled and cut into relatively thick noodles. Variations include Inaniwa Udon, which is hand-pulled, and Hōtō, which are cut into very wide strips.

How do you make Udon soup?

Udon can be served in hot broth or with a cold concentrated broth. Both of these are made using a base called Mentsuyu (めんつゆ), which consists of concentrated dashi, soy sauce, sake, and sugar. Please see my Mentsuyu recipe for more details.

How do you pronounce Udon?

U-don has two syllables, and each one is pronounced as follows:

Why did my noodles turn grey/beige

Japanese flour has a unique milling process that changes their mineral content and gives the flour a light yellow color. All-purpose flour from other countries will work, but the noodles will likely turn out grey or beige in color.

No, udon is made with wheat flour, and the gluten in the flour gives them their unique bouncy texture.

Yes, udon noodles do not contain eggs and are therefore plant-based. 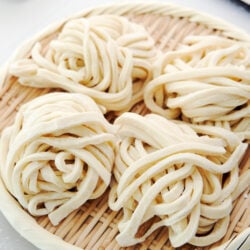