Yaki Udon is a Japanese stir-fried noodle dish that’s a close relative of Yakisoba. It’s typically prepared with inexpensive ingredients like cabbage, carrots, and onions, and yet it’s flavorful and satisfying. This has made it a street-food staple which can often be found at omatsuri, or festivals across Japan.

Although I’ve left out the meat from this version, and it’s brimming with flavor thanks to the shiitake mushrooms. If you’d rather make it with meat, simply stir-fry some thinly sliced pork or chicken before adding the vegetables.

How to make Yaki Udon

As with any stir-fry, this comes together in minutes, so it’s important to have all your vegetables prepped and your sauce mixed before you start cooking.

To make the sauce for the Yaki Udon, combine the soy sauce, Worcestershire sauce, maple syrup, and black pepper in a small bowl and stir them together.

Heat a 12-inch or larger frying pan over high heat until it’s hot. This is crucial as a cold pan will cause your vegetables to steam and get soggy.

Drizzle the oil around the pan and then add the cabbage, onions, shiitake, and carrots, and toss to combine. Let this fry undisturbed until the vegetables start to brown on one side and then toss again to redistribute everything.

Add the cooked udon and toss the noodles and vegetables together.

Drizzle the sauce over everything and toss continuously until every strand of udon is coated, and uniform in color.

Stop stirring for a few seconds to get some Maillard browning on the noodles and then toss to redistribute. Repeat this until the veggies are cooked, and the sauce has caramelized around the noodles.

Plate the Yaki Udon and garnish with chopped scallions and red ginger.

How do you pronounce Yaki Udon?

Ya-ki U-don has four syllables, and each one is pronounced as follows:

Should I make this in a wok?

With its large surface area and steel construction, a wok is ideally suited for stir-fries like this. Unfortunately, most Western stoves do not put out enough heat to take advantage of a wok. In fact, since Western stoves were designed to heat a flat bottomed pan evenly, you’re most likely better off using a large frying pan.

What are yaki udon noodles made of?

Yaki udon is made with udon noodles. These are typically made using wheat flour, salt, and water and come either fresh, dry, or pre-cooked and frozen.

How is Yaki Udon different from Yakisoba?

The primary difference between the two is the type of noodle used. Yaki udon is made using thick udon noodles, which are made with wheat flour. Yakisoba is made using alkaline wheat noodles like ramen. Additionally, Yakisoba tends to be seasoned primarily with a tangy, sweet, and spicy sauce called chunou sauce. Yakiudon is usually seasoned primarily with soy sauce or oyster sauce, but I like adding a bit of Worcestershire sauce to give the savory soy sauce another dimension.

Traditionally Yaki-udon usually includes some type of meat like pork or bacon. For my version, I’ve made this plant-based. Just be careful you get a Worcestershire sauce that is vegan-friendly as many traditional ones include anchovies.

Can I add meat to this udon noodle stir-fry?

The shiitake mushrooms in this recipe provide plenty of meaty umami; however, you can easily add your favorite protein to it by stir-frying your favorite meat, seafood, or plant-based analog before adding the vegetables. If you’re going to add a protein, I suggest seasoning it first with salt and pepper. 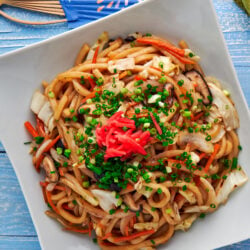