Coffee might not be the first flavor you think of when you think “Japanese desserts,” but the caffeinated elixir was brought to Japan almost 400 years ago by the Dutch. It took a whole before it caught on, but it’s now more popular than green tea. Coffee Jelly has a slightly shorter heritage, but it’s a ubiquitous treat found in multiple varieties at convenience stores and supermarkets around Japan.

At its core, Coffee Jelly is just gelled coffee topped with sweetened cream, but the simplicity belies the blissful experience of eating your coffee instead of drinking it. The sweet cream blooms across your tongue, coating it in a thick layer of pure milky joy before the cubes of jelly burst into pools of black coffee that washes away the rich cream with a refreshing hint of bitterness.

How to Make Coffee Jelly

For the coffee jelly, add the sugar and agar agar to a pot and then pour the coffee in. Set the pot on a stove over medium-high heat and bring the mixture to a rolling boil, while stirring it. Be sure to use a heat-safe spatula and scrape the bottom of the pot to ensure you don’t have any agar agar burning to the bottom.

Once the mixture comes to a full boil, pour it into an 8×8-inch square mold. If you want to make smaller cubes you can use a large pan as well. Let this cool to room temperature and then cover it with a lid or plastic wrap and put it in the refrigerator to chill and set.

For the sauce, just mix the cream and sweetened condensed milk together in a bowl and pop it in the fridge to chill.

Once the Coffee Jelly has set, unmold it onto a cutting board. If you have trouble getting it out of the mold, you can release the suction holding it in by inserting a toothpick between the pan and the jelly and then running it along the edge, it should flop out almost immediately.

Slice the jelly into cubes and serve them in glass bowls or cups drizzled with the sweet cream. You can store the jelly in the fridge for a few days, but you might find a bunch of liquid has leached out of the jelly. This is normal and you can either serve it with the cream and jelly or, if you don’t want to water down the cream, you can drain it off.

What is Coffee Jelly?

Coffee Jelly is a dessert made by solidifying coffee with a gelling agent such as gelatin or agar-agar. It was most likely invented in the UK, but it was brought to Japan over a century ago. You don’t see Coffee Jelly too much anymore in the West, but it’s a ubiquitous dessert found in almost anywhere in Japan.

How do you pronounce Coffee Jelly in Japanese?

Coffee Jelly (コーヒーゼリー) is transliterated into Japanese as ko-hi-ze-ri and it’s pronounced as follows:

ko like corner
hi like heal
ze like zen
ri like the “ri” sound does not exist in the English language and the best way to make it is to say the first part of the word “ream” with the tip of your tongue at the front of your mouth.

In Japan, Coffee Jelly is traditionally made with agar-agar (seaweed-based gelling agent), so the jelly itself is plant-based. Many packaged coffee jellies use gelatin these days, so you should check the ingredients if you are buying it pre-made. As for this recipe, the jelly is plant-based (assuming you use vegan-friendly sugar), but the sauce ingredients are not. You can substitute coconut cream sweetened with a bit of sugar or maple syrup. 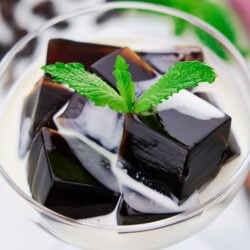