If you’re unfamiliar with East Asian sweets, the idea of sweet beans can be a little hard to wrap your head around, but the nutty flavor of adzuki beans lends itself well to sweet desserts. Oshiruko is a comforting dessert soup that’s made with sweet red bean paste, and it’s a wintertime favorite in Japan.

Served with a soft, chewy piece of mochi, this soul-soothing soup is satisfying enough to make for a light meal or a filling snack.

How to Make Red Bean Soup

If you already have anko (sweet red bean paste), making Oshiruko is as simple as heating the anko with water and sugar. If you don’t have any anko, you can use my tsubuan recipe to make it in under 1 hour using a pressure cooker.

Make the soup by adding the anko, water and sugar to a pot and bringing it to a boil. Stir periodically to keep it from burning. Once the soup comes to a boil, turn down the heat and let it simmer to keep it warm.

While the red bean soup heats up, you’ll want to heat the mochi by toasting it in a toaster oven or broiler until it’s puffed up and golden brown on top. I prefer the extra texture and flavor this adds, but some people prefer to reheat mochi in the microwave, which makes the whole thing soft and gooey. If you’re going to do it in the microwave oven, just wet the surface of the mochi, set it on some parchment paper, and microwave it on high until you see it puff up like a balloon.

To serve your red bean soup, divide the Oshiruko between two bowls and then top each one with a piece of mochi.

Oshiruko, which can also be known as Zenzai, is a sweet red bean soup that’s made by cooking anko together with water and sugar. Served with a soft and chewy piece of mochi, it’s a sweet snack that’s a wintertime staple in Japan.

How do you pronounce Oshiruko?

Oshiruko is a 4-syllable name pronounced as follows (read the italicized parts).

o like order
shi like sheet
ru like the “ru” sound does not exist in the English language, and the best way to make it is to say the word “ruse” with the tip of your tongue at the front of your mouth.
ko like corner

As long as the sugar used to make the anko is plant-based (most white sugar is not), this red bean soup is vegetarian and vegan-friendly. 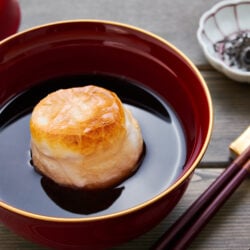